Germany prepares for Mediterranean climate | Germany | News and in-depth reporting from Berlin and beyond | DW | 20.05.2009

Climate change is likely to offer a relatively kind fate to Germany, but the country is already preparing for the mixed-bag in store. Rising temperatures could prove problematic to some while others could benefit. 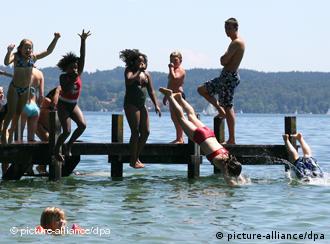 Germany's summers will get longer and hotter

While it may be a little early to crack out the Sangria on the Baltic coast just yet, there is little doubt that Germany is getting warmer.

According to the German Weather Service (DWD), last month was the hottest April on record. It is just the latest data to correspond to a trend in which six of the 10 hottest years recorded have occurred in the last decade.

On Monday, German Environment Minister Sigmar Gabriel said it was imperative to prepare for a different climate in central Europe, and warned that some degree of global warming was already inevitable.

"Scientific models show us that Germany's average temperature can be expected to rise by between 2.0 and 3.5 degrees Celsius by the end of the century," he said in Berlin, at a conference on adapting to a new, hotter climate.

Though Gabriel's forecast might come as a welcome relief for many Germans, who often gripe about the cold in a country with an average temperature of 8.3 degrees Celsius, such a change is expected to cause significant disruptions to society and the environment alike.

To prepare for this, Germany is working on a national strategy for coping with a warmer climate. Berlin is bringing together various level of government to work with industry, science and other parties to form an action plan by 2011.

The parties will look at how projected levels of warming are likely to affect some 13 sectors – including areas as diverse as agriculture, tourism, fisheries, health care, infrastructure and water management – and will come up with proposals to help the country adapt to change. 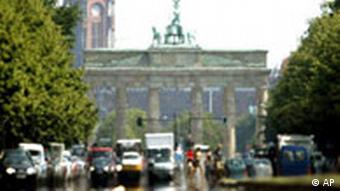 Cities can get far hotter than their surrounds in a heatwave

So what does the future hold in store for Germany?

By the end of the 20th century, Germany's average temperature had increased by between 0.6 and 0.8 degrees Celsius, with summers in particular becoming longer and hotter, and winters getting wetter.

Dr. Jürgen Kropp, head of the North-South group at the Potsdam Institute of Climate Impact Research, says this tendency is likely to gather pace.

Among the Institute's nastier predictions for Germany are an increase in the severity and frequency of flooding, as heavy rains follow on the heels of dry spells; reduced biodiversity as the habitats of alpine flora and fauna disappear; and more heat-related health problems, which will be felt disproportionately across the country.

"We will have more heat waves this is clear. We expect the highest impact of heat waves in urban areas because we know, due to different heat capacities, (that they) can heat up by more than 10 degrees Celsius compared to their surroundings, and this will mostly effect the elderly," Dr. Kropp says.

Despite this, he expects Germany to face a relatively mild challenge compared to the one awaiting poor countries in hotter parts of the world.

"When you compare Germany with other countries, for example developing countries, the expected changes in climate will not be a problem for Germany, because we have the ability to pay for the consequences."

And indeed some industries, with the notable exception of Germany's winter tourism sector, see opportunities in a warmer German climate. 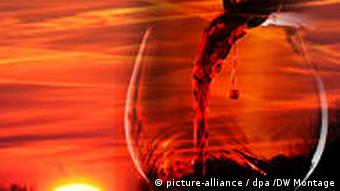 "We are in a more fortunate position in central Europe," says Steffen Pingen, environmental spokesperson for the German Farmers Association (DBV).

"There are some regions in north-western Germany that could yield more harvests through a warmer climate and a higher concentration of carbon dioxide in the atmosphere, but we stress that access to water remains the key, and there are signs that these regions also face drier spells and water shortage."

German wine growers, in particular, can claim to benefit from climate change.

"So far it has been positive, definitely," says Prof. Dr. Hans Schultz, director of the Geisenheim Research Center, which specialises in viticulture and horticulture.

Indeed, the German wine industry has been adapting to a warmer climate for years. The proportion of red grape varieties among German wines has nearly tripled in recent decades, and Dr. Schulz says white wines have also benefitted.

"In the past we had a minimum of three out of ten years which were not very climatically positive in terms of wine quality, and the ups and downs in terms of good vintages versus bad vintages. This has changed dramatically since the end of the eighties. Over the last 20 years we really have not had a bad vintage."

Dr. Schultz says adapting to a different climate is not without its problems, including increased variability in weather, and exposure to new kinds of pests – a blight that will be felt across the agricultural sector, says the DBV.

"We can't yet say which pests are likely to spread to Germany, but the spectrum is going to change," Pingen says.

"For example we are already seeing cases of bluetongue disease (an insect-borne virus which affects livestock), which used to be restricted to below the Alps. We are also seeing the arrival of weeds from southern Europe,"

But Dr. Schulz cautions against overstating this.

"There is quite a bit of migration of certain pests and diseases from southern Europe to more northerly areas but this is actually not that big-a-problem, because we can learn from how the southern European countries are dealing with it."

Dr. Schulz believes that northern Europe is well position to become increasingly well suited to wine production, in contrast to southern countries where water scarcity will be far worse.

No man is an island

Though Germany can expect to avoid the more dire fates that climate change has in store for some of the world's countries, the Potsdam Institute of Climate Impact Research warns that Germans should not be complacent about its knock-on effects.

"By the end of this century we expect a sea-level rise of one metre, possibly more. This already could displace millions of people, because a lot of low lying areas around the world are densely populated. These people will have to go somewhere. The point is where they will go?"

And while the concerns of a person about to lose their home to the Indian Ocean may be a world away from a wine-grower in western Germany, Dr. Kropp adds that westerners in general also have an obligation to help poorer countries adapt.

"OECD countries are responsible for greenhouse gas emissions, we have to come up with some solutions for these problems – this is our responsibility."

No doubt many will be raising a glass of German red to toast that idea.

Oceans should be focus of climate change fight, experts say

Environmental experts from 120 countries are in Indonesia for a key global conference to raise awareness of the need to protect oceans and marine ecosystems by highlighting their importance in countering climate change. (11.05.2009)

US stepping up but divide over climate measures remains, Gabriel says

A clear split between industrialized and emerging nations over who should bear the financial burden of climate change remains unresolved following a climate conference in Washington, says Germany's Environment Minister. (28.04.2009)

The average temperature in Germany is rising faster than scientists expected. Big cities will have to prepare for the most dramatic increases, according to a report from the German weather service. (29.04.2009)