Berlin is working on a three-way swap via Slovenia that would see heavy equipment sent to Ukraine. However, criticism of the government's lack of clarity continues — including from within its own ranks. 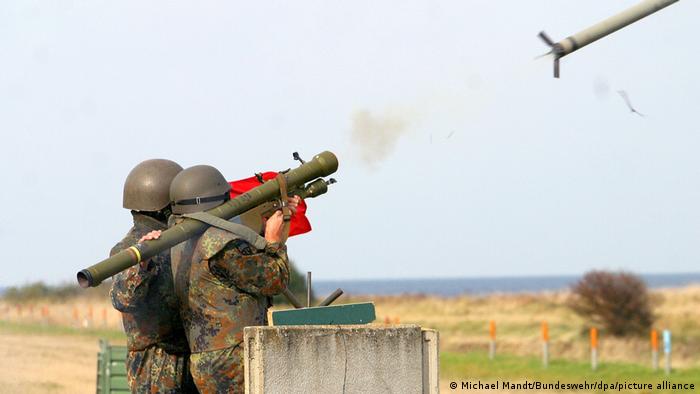 Germany has already sent some Strela anti-aircraft missiles to Ukraine

Facing mounting criticism for the lack of heavy weapons deliveries to Ukraine, Germany on Thursday signaled that it was planning a three-way swap of armaments that will enable Kyiv to get more of the equipment it needs.

Although Germany is the world's fifth-largest exporter of arms, it has long avoided sending weapons directly to conflict zones. Since Russia's invasion began in February, the government of Chancellor Olaf Scholz has sent light equipment, ammunition, and given additional funding to German arms manufacturers sending supplies to Ukraine.

This policy has been slammed — both inside and outside Germany — as not going nearly far enough, with Polish Prime Minister Mateusz Morawiecki saying that "the ambiguous position taken by Germany here is certainly not helpful."

The weapons swap confirmed to the press by government officials appears to be part of Scholz's reponse to the disapproval. The planned workaround would see NATO ally Slovenia send a large number of its T-72 battle tanks to Ukraine. To replace these, Germany would then send Slovenia a number of Marder tanks and Fox wheeled tanks from its own supplies.

Defense Minister Christine Lambrecht stressed on Thursday that her government knows that providing more military aid to Ukraine "must be done very, very quickly" because "the situation is dramatically coming to a head" as Russia launched a new offensive in Ukraine's east.

To that end, she said Germany was also planning on providing training to Ukraine's military on some of the new weapons from both Berlin and other NATO allies, including howitzers from the Netherlands.

Lambrecht said Kyiv had been provided with a list of German equipment that it could choose from. However, the list did not include tanks, helicopters, larger artillery, or the warplanes Ukraine has said it so desperately needs.

Both Scholz and Foreign Minister Annalena Baerbock have pointed out that the German army, long plagued by equipment issues, does not have all the supplies it needs for its own missions, thus making it difficult to send more to Ukraine.

Criticism for lack of clarity

Even from within the ruling coalition's own ranks, the lack of clarity and a stronger response from the government is becoming a source of frustration.

Defense expert Alexander Müller, from the Free Democrats, told the news agency dpa that "the German public has a right to know whether we are supplying heavy weapons, like our NATO partners are doing. To date, the German government's line is still unclear."