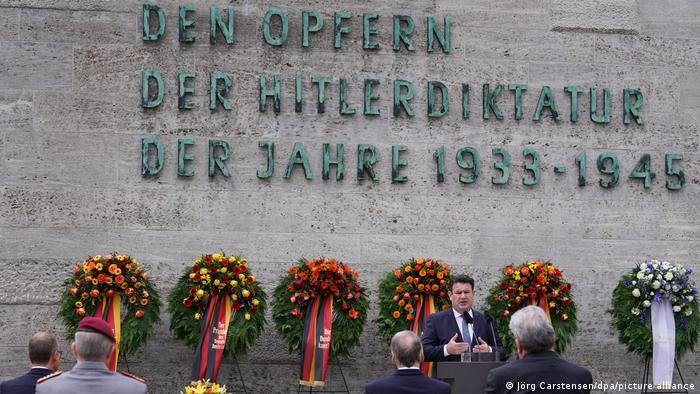 German government figures gathered on Tuesday to mark the anniversary of Adolf Hitlers assassination attempt and to speak out against antisemitism, as well as the appropriation of the anti-Hitler resistance.

On July 20, 1944, Claus Schenk Graf von Stauffenberg and two co-conspirators planted a bomb during a meeting with Hitler, which exploded on site but failed to kill him in an effort dubbed "Operation Valkyrie."

The colonel and his co-conspirators were tracked down and executed in the days and weeks that followed. Stauffenberg has a mixed legacy in Germany, with some seeing him as a hero and others as an opportunist, who only turned on Hitler once defeat in the war was a military certainty.

For the German government, Stauffenberg is seen as a patriot and celebrated as part of the wider anti-Hitler movement.

Defense Minister Annegret Kramp-Karrenbauer spoke about the assassination attempt at a ceremonial swearing-in of more than 100 new army recruits in Berlin, saying that the July 20 anniversary had become "part of the DNA of the Bundeswehr," the modern successor to Germany's armed forces.

At the event, Kramp-Karrenbauer emphasized that antisemitism had no place in the Bundeswehr and invited Josef Schuster, president of the Central Jewish Council in Germany, to address the recruits.

Her remarks come at a time when the Bundeswehr has tried to crack down on far-right extremism in its own ranks, and also appointed its first ever rabbi as chaplain since the war.

Germany's Labor Minister Hubertus Heil spoke at an event in Berlin, along with the mayor of Berlin Michael Müller and other political figures. Heil was critical of the recent comparisons that many in the anti-covid lockdown movement have made to the Nazi resistance.

"The abuse of the resistance has long been part of the tasteless and ahistorical narrative of a certain political milieu in Germany," Heil said.

Many in the anti-lockdown and anti-vaccine movement have likened themselves to Nazi resistance fighters, in their defiance of the German government's COVID-19 restrictions, some going as far as wearing yellow stars like those the Nazis forced Jewish people to wear.

Heil said that it was the height of disrespect to "politically appropriate the resistance fighter Sophie Scholl and at the same time march together with notorious neo-Nazis," in reference to reports that neo-Nazis have also taken part in anti-lockdown demonstrations.

Looking back at Stauffenberg's legacy, Berlin Mayor Müller said that although the uprising had failed, the event had tremendous moral weight and for Germany it was "an important step on the road back to freedom and self-respect."