Is the Wadden Sea drowning?

From a distance, the haze-shrouded mounds rising from the blue-gray of Germany's Wadden Sea could almost pass for shadows on the horizon. But up close the Halligen or Hallig islands are every bit real. Surrounded by the North Sea, these 10 tiny patches of low-lying marshland have long stood up to the wrath of its waves and whim of its weather.

The Hallig islands have little, if any, coastal defence and are the last port of call before the United Kingdom. Whenever a storm tide builds in the waters around them, the sea can easily submerge everything but the man-made dwelling mounds or Warften upon which people live. The locals call this event Landunter — literally translated as land under.

Read more: The German islands that regularly vanish beneath the sea

For all the threat of the name, Sandra Wendt, who grew up on Hooge, the second largest of the Hallig islands, says watching the North Sea sweep onto their land is an incredible experience that people from elsewhere want to see for themselves.

"It's really, really amazing, because you know the water will come, and you know it will go, and it doesn't do any harm. On the contrary," she said. "It's important for the Halligen." 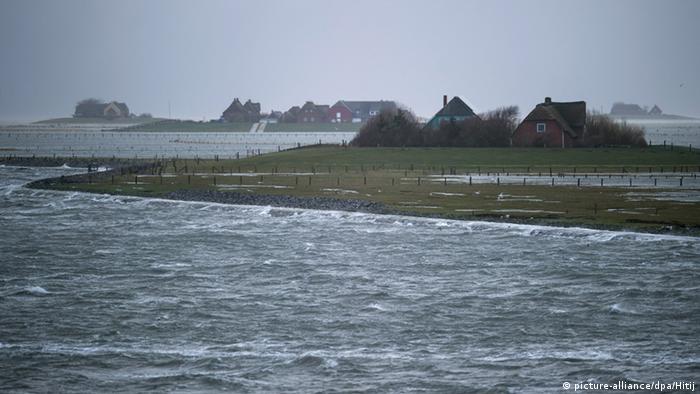 For centuries, these flooding events — which happen an average of four or five times a year on Halligen with low dikes, and between 40 and 50 times on those with no coastal defense at all — have deposited sediment that has enabled the islands to grow apace with regular sea level rise.

And that's not only important for the continuation of life on the Halligen themselves, but for the protection of the north-western German coastline, much of which lies below sea level and therefore relies heavily on the towering green dikes that shield it from regular flooding.

"The Halligen and other islands off the mainland are a kind of barrage against high waves," Hans-Ulrich Rösner, who heads up the Wadden Sea office of conservation group WWF told DW. "They make the water less deep in front of the main dikes, so in the end that means the dikes need to be a little bit less strong to achieve the same kind of protection." 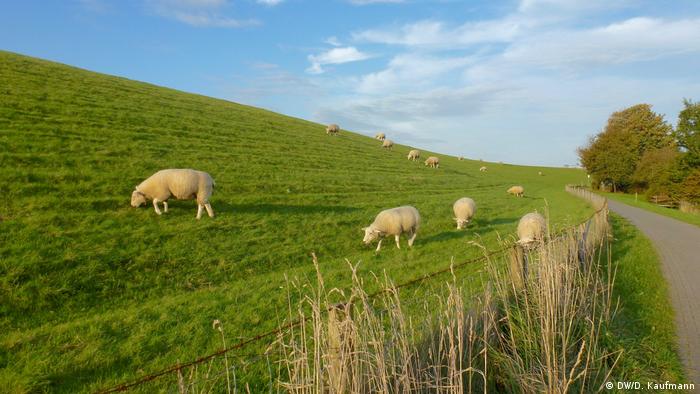 A characteristic of Germany's North Sea coast are tall green dikes, built to keep the sea at bay 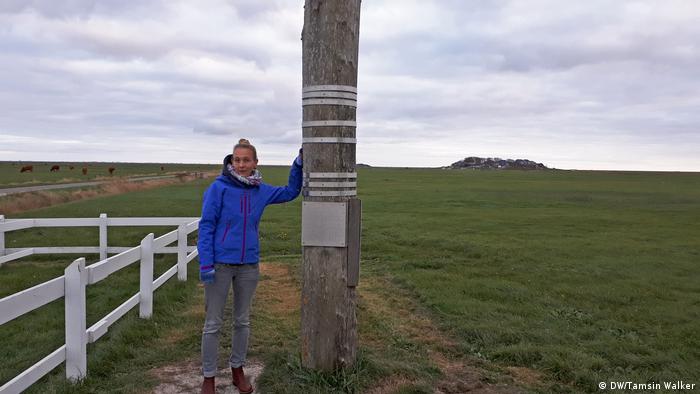 Mayor of Hallig Hooge, Katja Just, stands beside the pole that shows the levels to which the sea can rise

As such, there's a huge vested interest in safeguarding the islands, by far the largest of which is Langeneß with an area of just under 10 square kilometers (3.9 square miles). But that could prove complex in an era of climate change.

On Hooge, besides a sluice gate, which is used to help keep the island drained, a low dike was built in the 1930s to reduce the number of flooding events during the summer months, when cows and sheep still graze on the salty land. As a result less storm sediment finds its way onto the land, meaning it can't grow in the same way it once could. In light of exacerbated sea level rise, that's a problem.

"One suggestion now on the table is to leave the sluice gates open so more water can come in. They'd then be closed so the water stays on the Hallig for longer," Katja Just, the Bavarian-born mayor of Hooge told DW. "The complete opposite of earlier thinking."

The state of Schleswig-Holstein's agency for coastal defense, national parks and marine conservation (LKN.SH) is researching the concept for a number of Hallig islands, but a final decision is still several years away.

Taking refuge from the storm

In the meantime, work is underway to raise the outer height of the dwelling mounds on Hooge, so the houses will be nestled behind an incline and, therefore, better protected from storm surges. The measure was a response to Christian and Xaver, two cyclones that tore across northern Europe in quick succession at the end of 2013.

"They'd forecast a three-and-a-half-meter rise in sea level, but fortunately, we only got three meters," longtime resident Jan Dell Missier told DW. "Even at that height, the sea had already reached the top of our dwelling mound. If it'd been three-and-a-half meters, it would have flooded the houses." 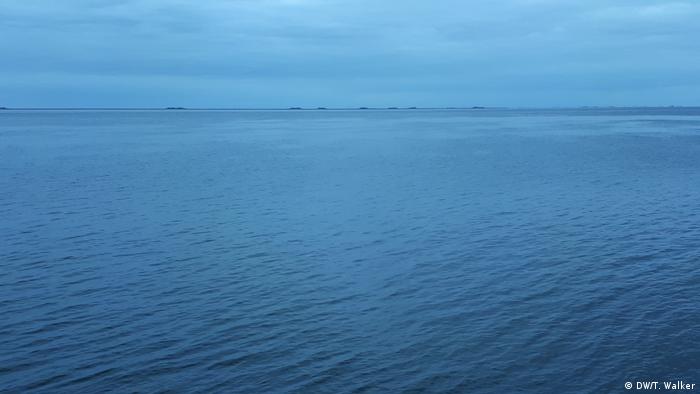 From a distance, the Hallig islands are just dots in the sea. Up close, they are forces to be reckoned with 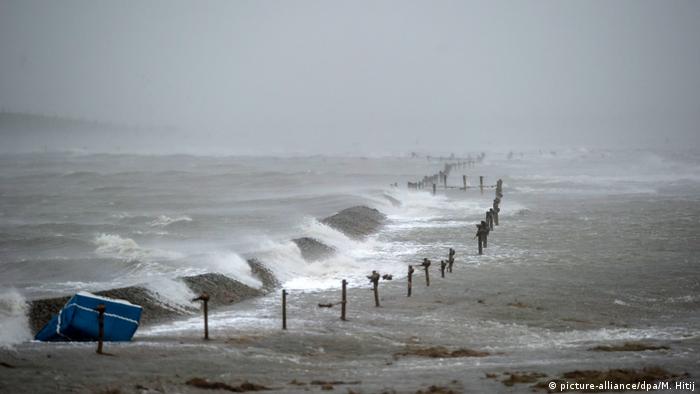 During cyclone Xaver, the sea easily found its way over the dike surrounding Hallig Langeneß

It was at that point that residents of the Hallig islands approached the LKN.SH on the mainland to take action.

"The message was that the waves had never been so ferocious," Thomas Langmaack, who is responsible for water management at the LKN.SH told DW. "People were worried. They were afraid."

Sandra Wendt describes cyclone Xaver as a "genuinely terrible experience," and the first time she'd ever felt afraid on her native Hooge.

"I'd never heard a storm wailing like that before or seen winds so fast they bend the panes of glass in your windows."

She spent the night at home in a "refuge room," which is built on a separate foundation to the main house and is tough enough to withstand even the most ferocious of storms. Coastal protection authorities are planning to ensure each dwelling mound has at least one such room, which should remain standing even if the rest of the house were washed or blown away. A dwelling mound generally accommodates multiple homes.

"It looks like any other regular room. But if you try and hang up pictures, you realize there's something different about it. The walls are reinforced concrete," Wendt said of her refuge room. 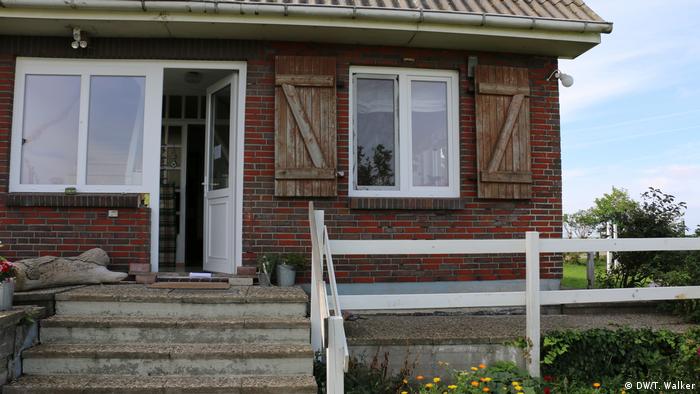 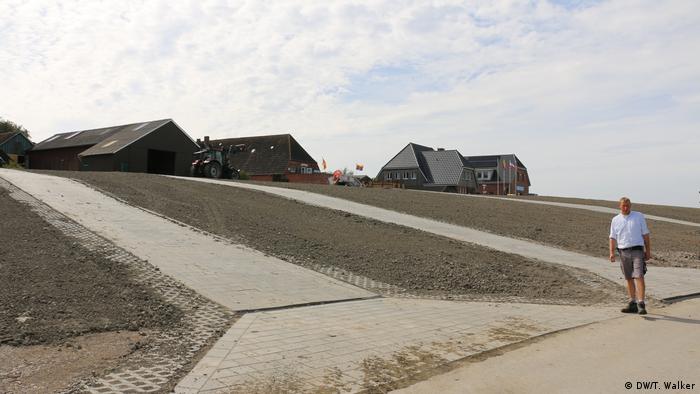 Jan Dell Missier stands at the foot of his dwelling mound, which has been raised so the houses on top now sit within its rim

Learning to live with the water

Dell Missier says he wasn't scared by the cyclones, but concedes that the unprecedented winds they whipped up are indicative of the fact that something has changed. He's now questioning the continued viability of life as he's known it for so long.

"I do ask myself what it would be like if the Hallig was flooded with every high tide," Dell Missier said. "What would we do here, all we'd have left would be the dwelling mounds."

Projections variously suggest at least some of the 10 tiny islands will have disappeared beneath the surface of the North Sea within 50 to 100 years from now. But Mayor Katja Just says while most locals are concerned enough to take or request precautionary measures, they're generally calm about the future.

"To be afraid of living somewhere because you think it's going to disappear would be emotional suicide," she said. "If we were always thinking about what might happen when the next storm Christian or the next Xaver strikes, we'd have to move away."

And that, says Hooge native Sandra Wendt, as she looks out at the blue-gray sea and the haze-covered shapes of the other Halligen, is unimaginable.

"This is our world. This is our life. People might have other worries that make them move away, but you can't leave because of the water. Not when you were born here."

Sea levels are now expected to rise even higher beyond the end of the century, putting coastal regions at extreme risk. Hans-Otto Pörtner says the time for drawn-out discussions has passed — we need to act now. (25.09.2019)