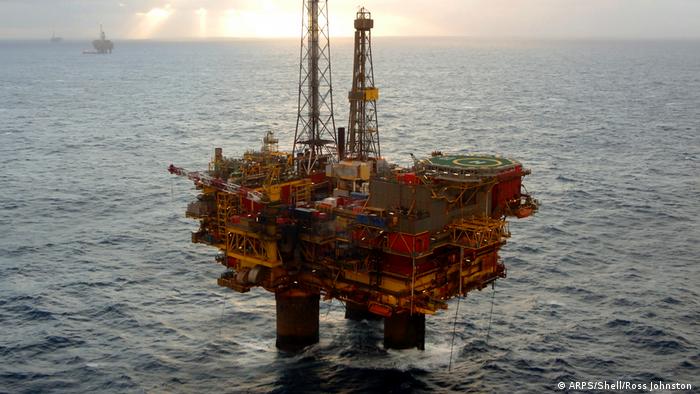 Germany's Environment Ministry said it was "absolutely unacceptable" that Shell intended to leave the "legs" of its platforms — after partial dismantlement — to decay at sea, still containing 12,125 tons (11,000 metric tons) of crude oil residues.

Ministry spokesman Stephan Gabriel Haufe told reporters in Berlin on Wednesday that Germany wanted to avert a repeat of the "Brent Spar" drama of 1995 that saw Shell do a U-turn on disposal at sea — but only after a public outcry.

Britain, on the verge of Brexit, earlier this year, said it would grant Shell an exemption from a treaty requirement to fully remove rigs during decommissioning.

Shell said its decommissioning plan is technically "complex" but "safe" and not driven by cost factors.

A special meeting of OSPAR, the commission established in 1992 for the environmental protection of the North-East Atlantic, including the North Sea, will be chaired by Ireland on Friday.

Also upset by Shell's part-only removal plan, according to Germany, are Belgium, the Netherlands, Sweden, Luxembourg and the European Commission.

The platforms — three mostly concrete and the fourth of steel — lie far offshore in the Brent field, north-east of Scotland, and east of the Shetland Islands, halfway to Norway.

'Clean up your mess!'

On Monday, Greenpeace activists boarded two of the giant structures, Brent Alpha and Brent Bravo, and unfurled a banner reading, "Clean up your mess, Shell!"

Brent's oil and gas reserves have dwindled since their peak of the 1980s when they delivered more than 500,000 barrels a day. The field, a Shell venture with operator Exxon Mobil, has — aside from the platforms — a myriad of subsea structures and over 150 wells.

The German Environment Ministry, citing a consultant's study on its website, said Shell's plan, including leaving residues — mixes of oil, water, sand and grit — is "non-compliant" with OSPAR's 1993 policy on full removal.

Remains left behind at the platform sites would also be hazardous to shipping, the ministry said.

"Retention at sea would in the case of three of the platforms include, in addition to the actual supporting structures projecting above the water surface, a total of 62 large-volume, approximately 65-meter-high oil tanks and drilling chambers, filled with approximately 640,000 cubic meters of oily water," according to the ministry.

"In line with UK legislation, the Brent Field will now be decommissioned. The decision to decommission Brent is a natural step in the life cycle of the field," Shell said.

Precedent for hundreds of structures?

Across the North Sea, according to the German ministry, are 1,740 oil industry structures that should be dismantled, including 80 structures containing volumes of crude residues.

"The oil in the concrete pedestals of the platforms will eventually end up in the ocean," said Bussau.

Greenpeace's chief scientist in Britain, Doug Parr, warned that if British ministers "bent" OSPAR's rules "this will set a dangerous precedent for the decommissioning of hundreds of aging North Sea platforms in coming years."

Environmental destruction and climate change are top fears among German youth, alongside terrorism, according to a survey. Most trust democracy but hardly party-aligned politicians. A fraction are prone to populism. (15.10.2019)