Youth in Revolt: Climate of Change?

Nearly three-quarters (71%) of Germany's youth aged 15 to 26 rate environmental destruction and pollution as their top fear in the latest Shell Youth Study — a survey series begun in 1953 and now into its 18th sampling.

Among the 2,572 children, teens and young adults questioned between January and March, terrorist acts emerged as their second-highest fear, followed by climate change. Fear of terrorist acts topped the list in the last study, conducted in 2015.

Having an environmentally-conscious lifestyle was ranked as important by 71% of those questioned, up from 60% recorded in 2002, according to the authors, who gave the study the subtitle "A generation speaks up."

"... those who have already been politically interested are grappling even more intensively with politics," said Mathias Albert, who headed the study's research team at Bielefeld's university in the state of North Rhine-Westphalia.

Although 77% of respondents expressed satisfaction with democracy as a whole in Germany — significantly up from 59% in 2006 — nearly three-quarters (71%) also endorsed the statement "I don't think politicians care about what people like me think." 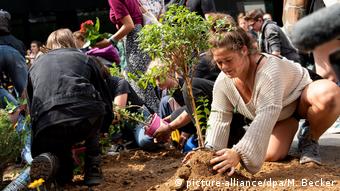 The study's authors also noted a strong correlation between personal interest in politics and high levels of education.

"The youth of today are forcefully stating their demands with regard to shaping the future of our society and demand the settings for the course needed for this be initiated today," they wrote.

The internet and social media had "outstripped" traditional media sources, but these still enjoyed the "highest trust levels" among youth, they added.

One tenth prone to populist slogans

While 39% described themselves as "cosmopolitan,"  with 57% agreeing it was good that Germany had taken in refugees, another one-in-ten ended up in the category "national populist" and another 24 percent were classed by the study's authors as being "attracted to populism."

They had endorsed a series of test statements such as "In Germany, you can't say anything bad about foreigners without immediately being called a racist," with this specific sentence being endorsed by more than two-thirds of participants.

"About a third of youth tend towards these slogans," said federal family and youth minister Franziska Giffe, adding "this is a lot."

"We need more political education in schools," said Giffey, who last week overrode an intended funding cutback for a federal scheme "Live out Democracy" (Democratie leben!) — in the wake a gunman's attack on a synagogue in Halle.

Giffey on Tuesday also reiterated her view that Germany's federal voting age should sink from 18 to 16.

The single-earner model in which the husband earns and the wife stays mainly at home was favored by 54% of the respondents — more so in western Germany but less so in Germany's east with its double-earner ex-communist heritage.

It was a remarkable "retraditionalization," said Giffey whose ministry has long campaigned for compatible "family and vocation" lifestyles.

Germany's current youth generation was "fundamentally pragmatic" in its outlook, coupled with a wish for stable social relationships, the study's authors noted.

The study's questions about religion showed a decline in belief. Belief in God, ranked at 51% in 2002, fell to 39% in the latest Shell survey. Positive response rates were higher among Germany's Islamic and Jewish communities.

Shell's sixteenth study on the outlook of German youth shows a surprising rise in optimism for the future. But the findings also imply a growing gap between the social classes. (14.09.2010)

Youth in Revolt: Climate of Change?