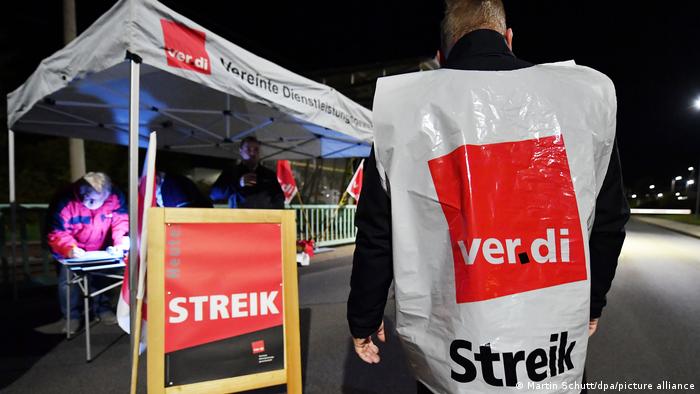 Local public transport was disrupted across Germany on Tuesday morning as workers went on strike.

The work stoppage hit commuters in the capital, Berlin, as well as other major cities, including Hamburg, Cologne, Frankfurt, Munich and Leipzig. Other regions and cities across the country were also affected.

In ongoing talks, employers have so far refused to agree to replace a system of patchwork wage and regulatory agreements that differ across the nation's 16 federal states.

Intercity train operator Deutsche Bahn and other intercity travel are not affected by the strike.

'No understanding' for strikers

"That the employers are not even willing to negotiate mocks the employees and torpedoes any effort to achieve a turnaround," was the reason for the strike, reported German public broadcaster ARD, citing the chair of Verdi, Christine Behle.

KAV Berlin, an organization that represents the interests of employers, said it had "no understanding" for the warning strikes as transport sector workers in Berlin received a wage increase last year that totaled €102 million ($119 million). In Hamburg, the strike will last until midday on Tuesday

How is the strike impacting German cities?

In Berlin and Hamburg, public transport sector workers plan to strike until midday on Tuesday, interrupting the morning commute.

The metro, trams and busses are all affected by the strike action in both cities.

Local transport company Berliner Verkehrsbetriebe tweeted that it regrets the inconvenience and hopes to get transport started as soon as possible after 12 p.m. local time.

Around 30,000 local transport service employees have been called to strike in Germany's most populous state of North Rhine-Westphalia according to Verdi.

In major NRW city Cologne, with a population of over 1 million, the strike is set to last 24 hours. Transport is set to return to normal at 3 a.m. local time on Wednesday.

"I can understand, but it's annoying because I can't get to work," reported public broadcaster Westdeutscher Rundfunk, citing a commuter in NRW city Dortmund that is also affected by the strike.

Germany has seen a series of strikes over the past days by public service workers, including city cleaning staff, daycare workers and public order officers. The strikes come ahead of a third round of talks with employers to negotiate a wage increase of 4.8%.