Sri Lanka′s Ceylon tea workers live under a legacy of exploitation | Asia | An in-depth look at news from across the continent | DW | 22.09.2020 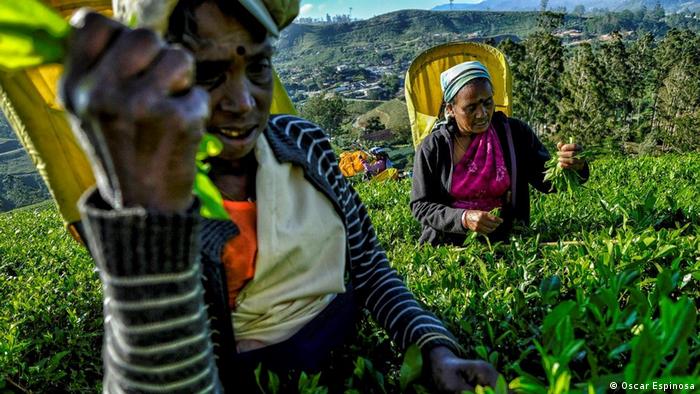 Tea plants cover the hillside like a green blanket, as a group of women carrying baskets slowly begin moving up the rows like small colored ants.

We have just arrived in Nanu Oya, a village in the tea-producing highlands of Sri Lanka. For generations, groups of mostly women have worked these hillsides, in tough conditions for little money.

The next day, we meet Cowsalliyadevi Palani as she prepares to go to work. She is 50 years old and has been working in the tea plantations since she was 16.

After putting on several layers of clothing, Palani ties a cloth around her waist as an apron, a scarf around her head and swings her tea-leaf basket onto her shoulders. It will stay on her back all day. 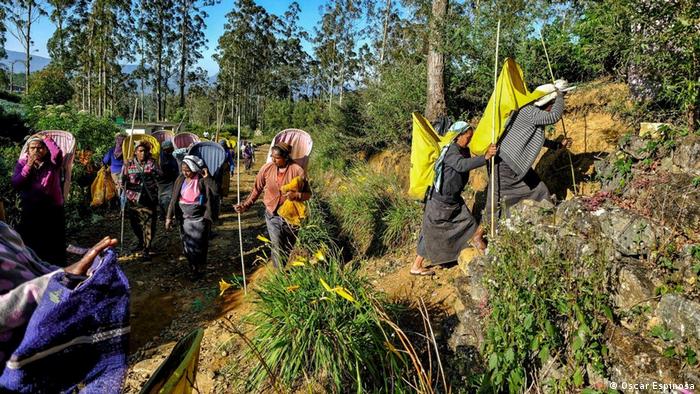 A history of exploitation

Palani is one of about 500,000 workers in the Sri Lankan tea industry. Like most of them, she descends from Tamils who were brought to British Ceylon from the Indian mainland in the 1820s.

Tea cultivation was introduced to Sri Lanka by the British after coffee cultivation had failed. To get the industry going, plantation owners needed lots of manual labor, and people from India's southern Tamil regions were recruited into an indentured labor system that tied workers to plantations.

Although slavery was outlawed in the British Empire, these workers were unpaid and completely at the will of plantation owners. They arrived indebted and had to pay for their own transportation, until this rule was changed in 1922.

When Sri Lanka became independent in 1948, the tea workers were legally designated as "temporary immigrants" and were denied citizenship. 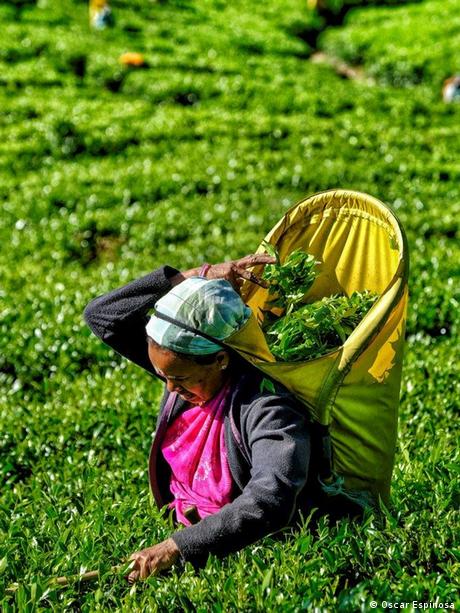 In the 1980s, after more than 150 years living in Sri Lanka, the descendants of Indian Tamil indentured servants were granted Sri Lankan citizenship rights. However, they continue to be among the most marginalized and impoverished people in the country.

Dressed and prepared for work, Palani meets her neighbor and together they head down the road to the tea plantation.

At the foot of the hill where the rows begin, a supervisor reviews their tally booklets. At the end of the day, he will write down the weight of the tea leaves collected. The supervisor lets the women know where they should get started, and they begin to climb the hills.

Many of them are barefoot as they mingle with the tea plants and begin to pluck the most tender leaves.

"I have a son and a daughter and luckily neither of them works here," Palani says. "Fewer and fewer women work on the plantations, the younger ones don't want this job because they earn little and it's very demanding," she explains, as her hands tear up tea leaves.

"Most men who used to work on the plantation now do other things," she said with a shrug. "Many of them have orchards and they earn more."

At the end of the day, after hours in the sun, the women descend the hill carrying baskets on their backs and sacks on their heads full of tea leaves.

The supervisor waits to weigh the tea leaves. "Today has been a good day, I have managed to collect more than 18 kilograms," she said, smiling as she looks at her card. "I will earn a little more than 700 rupees."

"Youth from the community have qualified as doctors and lawyers ... opportunities for upward mobility are available," the association said.

Sri Lanka currently produces around 300 million kilograms of tea annually. It is the fourth-largest tea producer in the world, behind China, India and Kenya.

According to the Planters' Association of Ceylon, Sri Lanka pays its tea workers more than other major tea producing nations like China, India and Kenya. Nevertheless, the tea workers remain mired in poverty.

Frustrated with their stagnant wages and the constant increase in the cost of living, workers have organized protests to demand a fair wage.

Tens of thousands of plantation workers throughout Sri Lanka have united in recent years to demand a minimum wage of 1,000 rupees a day (about €5).  The "1000 Movement" is one of the largest mobilizations of Sri Lankan workers.

The last agreement between workers and owners was in October 2018. Companies refused the demand for 1,000 rupees daily. A wage increase from 500 to 700 rupees was tentatively agreed to, although the agreement still needs to be signed by the tea companies.

However, taking into account attendance and productivity incentives, the old wage was actually 730 rupees, say workers. These incentives were removed under the new 750 rupees agreement, resulting in an actual increase in wages of only 20 rupees (about 10 cents). 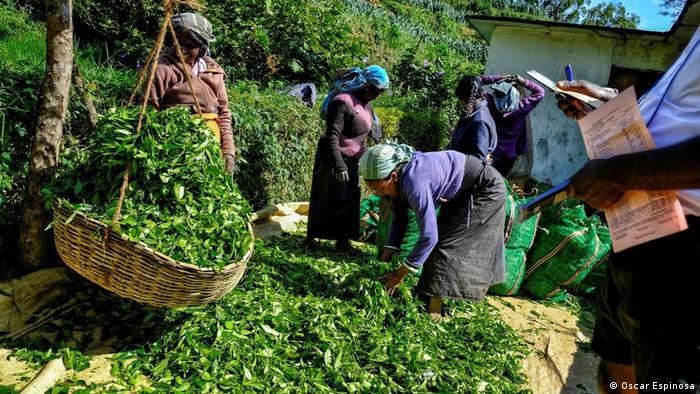 Frustrated with their stagnant wages and the constant increase in the cost of living, workers have organized protests to demand a fair wage 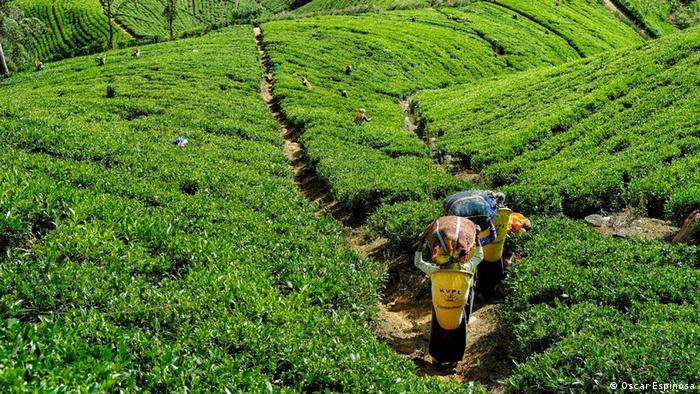 Sri Lanka is currently the fourth-largest tea producer in the world, but tea workers remain mired in poverty

There are few people advocating for the plantation workers, and their living wage remains below €5 a day.

The first thing Palani does when she gets home is greet her 9-month-old granddaughter. Her face lights up when she holds her in her arms, as if that's all she needs to recover from a hard day at work.

"She's the little doll in the house," Palani says happily. She leaves her for a second to change clothes, wash up and eat some curried rice, and goes back to playing with her.

"I don't like what I do, it's very hard work," says Palani with a half-smile. "But I am very happy, because after seven generations, I will be the last in my family who will have to work on the tea plantation."

Editor's note: This article has been amended to include statements from the Planters' Association of Ceylon, a tea industry interest group.

Sri Lankan President Gotabaya Rajapaksa wants to make the country's tea organic. But his plan comes with huge risks. Tea growers fear that their plants can't make it without the nutrients from fertilizers.