Prosecutors could open an investigation into whether "possibly omitted or delayed warnings or evacuations" contributed to the death of 180 people in floods. 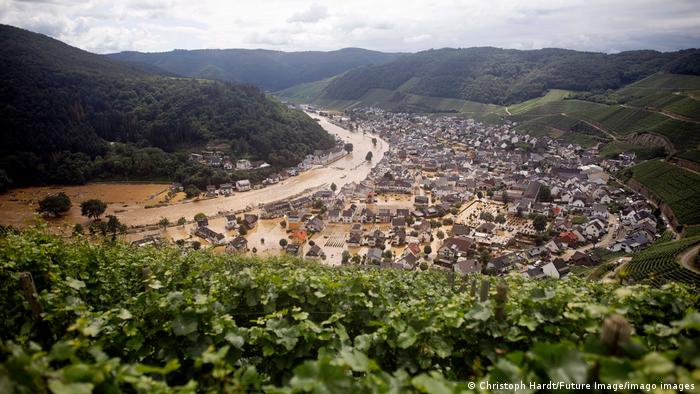 German prosecutors on Monday said they were looking into whether there were grounds to investigate negligence causing deaths in the recent floods.

At least 180 people were killed in severe floods that battered towns in western Germany in July.

The disaster prompted people to question whether authorities had done enough to warn residents ahead of time.

In a statement, Germany's public prosecutor office said that it was examining whether to initiate preliminary proceedings on "negligent homicide and negligent bodily harm as the result of possibly failed or delayed warnings or evacuations of the population."

The evidence could include police reports on the deaths of 12 people in a care facility in the town of Sinzig, as well as news reports of the disaster, according to the statement.

Germany floods: Could the catastrophe have been prevented?

Federal and state officials faced criticism that they had not done enough to warn locals in hard-hit areas.

German Interior Minister Horst Seehofer said it would be "completely inconceivable for such a catastrophe to be managed centrally from any one place," noting that it was the state authorities' responsibility.

The German Meteorological Service (DWD) had also defended its crisis management, saying that local authorities did not pass on its warnings about the flooding.

Some state officials have admitted that their response to the crisis could have been better but have ultimately said they did what they could do.

What is the warning system in place?

Last week, Seehofer said he had given the order for emergency alerts to be sent to cell phones connected to specific local network antenna as needed when a crisis occurs.

Such mechanisms have been typically frowned upon in Germany amid privacy concerns, but many argue lives could have been saved with proper warning.