Germany mulls getting rid of compulsive military service | Germany| News and in-depth reporting from Berlin and beyond | DW | 12.06.2010

The German Bundestag is debating a proposal to decrease the length of mandatory military service in a bid to save money. But if Defense Minister Guttenberg has his way, the military draft could be scrapped altogether. 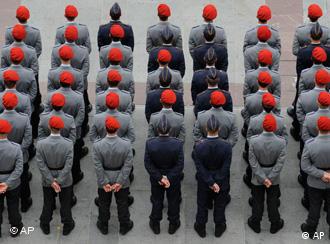 Germany's lower house of parliament, the Bundestag, is currently debating a proposal to decrease the length of mandatory military service from nine to six months. 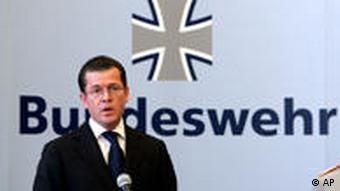 The proposal is among a raft of austerity measures put forward by Chancellor Angela Merkel's coalition cabinet, as the government seeks to tackle the country's massive budget deficit.

Defense Minister Karl-Theodor zu Gutenberg wants to go a step further: he has proposed ending military conscription altogether, saying it is important to consider all options as the German government searches for more ways to save money.

His ministry alone needs to cut about 4 billion euros ($4.8 billion) in costs.

Reluctance to end a 'tradition'

The opposition Social Democrats have opposed the move, saying it would destroy the country's post-war tradition of the "citizens in uniform."

But even in the governing coalition, not everybody agrees with the defense minister, who is a member of the Christian Social Union (CSU), the Bavarian sister-party to Merkel's Christian Democrats (CDU).

The leader of the CDU's parliamentary group has called for compulsory military service to be maintained.

Volker Kauder told the Süddeutsche Zeitung newspaper that it was "the instrument to link society and the Bundeswehr."

"We've experienced on a number of occasions in our history what can result if this bond is no longer there," he said, adding that what mattered was that the Bundeswehr was able to fulfill its mission.

Meanwhile, the Frankfurter Rundschau newspaper reported that the defense ministry plans have for a long time been based on a total scrapping of compulsory military service and a massive troop reduction.

According to the report, no new recruits are to be conscripted starting next year. In addition, plans had been drawn up to get rid of 40,000 of the Bundeswehr's 251,000 professional and regular soldiers by 2014.

The Free Democrats (FDP), junior partners in the governing coalition, have urged Guttenberg to take a speedy decision on the abolition of conscription.

"There should be clarity about the Bundeswehr's future before the next conscription deadline on October 1," the party's defense policy spokesperson, Elke Hoff, told the Hamburger Abendblatt newspaper.

She also stressed that cutting the number of regular and professional soldiers only made sense if conscription was suspended at the same time.

The Bundestag is expected to pass a bill on an amendment to the conscription law as early as next week. The draft bill provides for compulsory military service of six months instead of the present nine months for all conscripts from July 1.

Those opting for community instead of military service are expected to be allowed to extend their duty voluntarily by a further three months.

The debate over whether to continue the post-war tradition of conscription comes as the Bundeswehr's mission in Afghanistan is becoming increasingly unpopular at home.

More than 4,000 German troops are currently stationed in Afghanistan.

The German government is embroiled in day two of discussing ways to bring down the country's massive budget deficit. The savings plan may include cuts to social welfare benefits or tax hikes. (07.06.2010)