Germany launches ′Welcome to Germany′ program for young refugees | Germany | News and in-depth reporting from Berlin and beyond | DW | 29.05.2015

A new program launched by the German government aims to support young refugees who enter the country unaccompanied by adult relatives. The aim is to give them a new home in Germany. 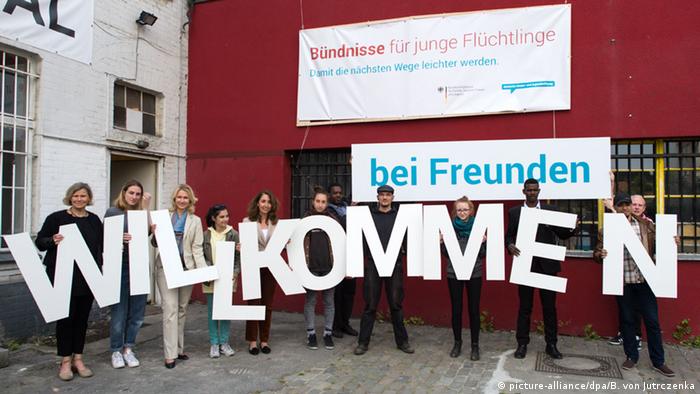 Nachil is from Irak. The 23-year-old Yazidi used to live in the Sinjar Mountains in the north of the country. Last August, he had to flee from advancing "Islamic State" militants.

"We did not leave voluntarily," he said. "We had to leave our homes, had to leave all our belongings behind and escape. We had to make the decision within one hour."

The young man escaped via Syria and Turkey, eventually arriving in Germany four months ago.

"We Yazidis don't get any support anywhere in the world," he said. "We are people without a voice. Germany is the only country which supports us."

Despite being grateful to Germany for supporting the persecuted Yazidis, Nachil was disappointed when he arrived in Berlin and was sent to a home for refugees. He said he considers the word offensive: "I don't want to be a refugee, and I don't like being called one. I'm somebody who had to leave his home and had to find a new one."

His mood only improved when he found out about "Kunstasyl," a participatory art project in Berlin's Spandau district, where he received encouragement and made friends. Now Nachil said he wants to learn German as quickly as possible so he can begin studying in Germany. 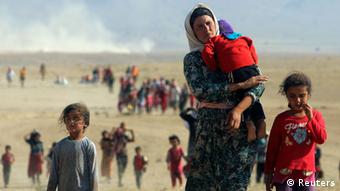 In August 2014, tens of thousans of Yazidis had to flee from "Islamic State" terror militias

Hamidullah of Afghanistan said he is also eager to take up studies. He, too, was exposed to traumatic experiences during his months-long escape: He was taken hostage, arrested, tortured and imprisoned. Eventually, he arrived in Germany with a broken knee and was hospitalized for three months and underwent an operation.

Now able to walk again, Hamidullah was also sent to Spandau's refugee center. Like Nachil, he also intends to learn German quickly in order to start a new life. He said he would like to bring the remaining members of his family from Afghanistan - he has lost contact with his father and does not know if he is alive, while his mother, two brothers and three sisters were staying with relatives. Hamidullah was recently able to get in touch with them for the first time in a year.

Under threat because of his work as a translator for foreign organizations in Afghanistan, Hamidullah said he had no choice but flee the country. Still, he said, he does not feel homesick for the country.

"I'm happy here, and if I can bring my family along I will not return to Afghanistan," he said.

In future, the German government wants to offer young refugees like Nachil and Hamidullah an opportunity to live in Germany. In addition to finding accommodation and safety in the country, a new program would allow them to get vocational training, according to federal Family Minister Manuela Schwesig.

Schwesig and Germany's commissioner for migration, refugees and integration, Aydan Özoguz, launched a new program on Thursday in Berlin to support the communities in Germany that receive adolescent refugees who enter the country unaccompanied by adult relatives. Currently, more than 30,000 minor and young adult refugees live in Germany. 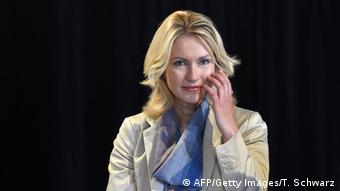 Minister Schwesig at the "Welcome at Friends" program launch

"It is my hope that children and adolescents who arrive in Germany will find a new home here, and that we can establish a culture called 'Welcome at friends.' You are now safe here, and we will go along with you when you explore new ways - without fear, with a good education, with prospects," Schwesig said.

The German Foundation for Children and Adolescents (DKJS) is on hand as a partner in the 12 million euro project ($13.8 million) and will establish regional offices in Hamburg, Berlin, Cologne, Frankfurt, Magdeburg and Munich. The offices will serve as contact points for volunteers willing to help the refugees.

There were volunteers all across Germany, according to Özoguz.

"It's wonderful that tens, if not hundreds, of thousands of people in our country are showing, for a wide variety of reasons why they want to help people who come to Germany," she said, adding that many elderly citizens, themselves driven from their homes when they were young, were offering their support.

Help with starting a new life in Germany

Advising and coordinating volunteers and setting up networks among them will be an essential task, according to DKJS managing director Heike Kahl.

"I'm quite delighted because the program is definitely being launched at the right time," she said.

She said her organization will work to create networks and to link up with schools, youth work, refugee organizations and volunteers. The "Silesian 27" arts project was a good example, she said. For years, the arts center has worked with various institutions in the Friedrichshain-Kreuzberg district of Berlin in order ensure young refugees are a part of today's German society.

Many of the center's members come to act and work on art projects and meet other young people. But all of them also focus on learning German. So far, however, neither Nachil nor Hamidullah has been accepted by a school or training program - when it comes to learning German, demand for courses in Berlin greatly outstrips supply.

The European Commission has proposed a quota system regulating the distribution of refugees - and has run into tough resistance. But such a system must be implemented, writes Christoph Hasselbach. (13.05.2015)