Once a tech front-runner, Germany now faces the mammoth task of catching up with today's AI giants. Angela Merkel has launched a broad initiative to transform lagging digital infrastructure and paper-based bureaucracy. 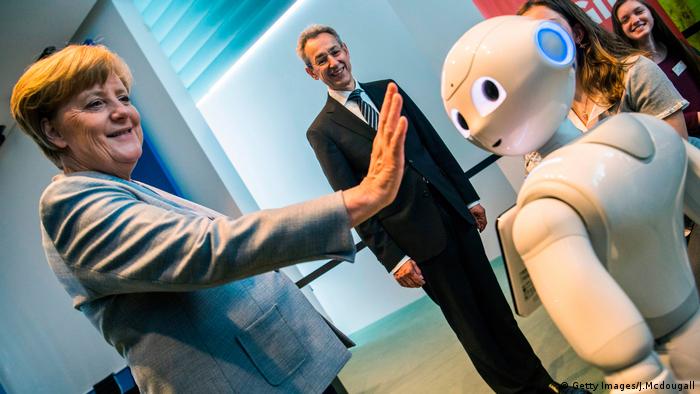 "The internet is new territory," German Chancellor Angela Merkel said back in 2013. It was a comment that prompted ridicule, but at the same time indicated Germany's lackluster approach to digitalization.

Five years on, Germany has finally joined the party. After a two-day cabinet meeting in Potsdam dedicated to a digital strategy, it was announced that some 3 billion euros ($3.93 billion) have been earmarked for investment in artificial intelligence (AI) by 2025. An equal amount of private investment is expected to double funds.

The aim: to make Germany a "leading international location for AI," said Merkel.

At first glance the amount appears considerable, but compared to other international competitors, Germany has barely shaken its piggy bank.

In the next five years, France plans to invest 1.5 billion euros in AI, while China plans to create a state-funded 150-billion-dollar industry by 2030.

Until now, the German government has been wary of being accused of wasting public spending and ignoring voters' immediate concerns: health care, education, and pensions.

Germany's long-awaited digital strategy — due to be presented at a digital summit in Nuremberg early in December — covers five main areas:

With a digital strategy agreed, time is ticking for Germany to play catch-up. According to a study by Ernst and Young, 55 of Germany’s top 100 companies by revenue are in the industrial sectors. By comparison, in the US, 20 of the country's top 100 companies are in IT and media.

"This strategy offers a real chance for Germany, but implementation and the speed at which Germany gets it off the ground will be imperative to Germany's success if it's to become a world leader in AI," Jörg Bienert, chairperson of the German Artificial Intelligence Association (KI-Verband) told DW.

"The most important measure will be investment into research."

In order to boost research facilities, Germany's digital strategy also includes positions for more than 100 professors in the field of digitalization, in the hope of stopping its brain drain of AI experts.

"Then it will be important to make sure that this expertise and the results of research are implemented into products," Bienert added.

AI 'Made in Germany'

Production of world-famous products and names in technology was once synonymous with Germany. Carmaker Audi's mission statement "Vorsprung durch Technik" (Leading through technology), for instance, became internationally recognized. But as software overtook hardware, Germany has lagged behind.

Now, Merkel said on Thursday, the same brand "Made in Germany" claim must also be a trademark in artificial intelligence, adding that "people must be at the center of Germany's understanding of digitalization."

"Digitalization means the principles of the established social market continue to apply in Germany," she added.

Indeed, German skepticism and misconceptions about artificial intelligence, particularly when it comes to data sharing, could prove to be one on the biggest hurdles for the government when it comes to implementing its digital strategy.

While Germans are more than happy baring all when it comes to a trip to the local sauna, covering up is everything when it comes private data. It's no surprise that the world’s first data protection law was in fact passed in the southwestern German state of Hesse in 1970.

Angst over unlawful data sharing can also be traced back to surveillance by the Gestapo secret police under Nazi Germany, as well as the repressive Stasi in former East Germany. In recent months, displays in bus shelters have even been filled with adverts from Facebook, advising Germans on how to improve their privacy settings in a bid to quieten critics of the company's data sharing.

"Many Germans have this misconception about AI. They can only relate to what they see in sci-fi movies," Bienert told DW.

Similarly, Lena-Sophie Müller, Chief Executive of the digital society initiative D21, said a discussion with citizens about the ethics where artificial intelligence directly affects people – be it health, work or mobility – will "make it easier for people to develop a sense of the benefits" and "oust unfounded fears."

Concerns over job losses, however, are very much real. By 2025, some 1.3 million jobs will have been replaced with artificial intelligence, German Labor Minister Hubertus Heil said at the two-day conference.

But, in turn, another 2.1 million will be created. In the hope of avoiding another generation of Germans with broken biographies — as was seen across large parts of industry in the former East Germany (GDR) following reunification in 1990 — Merkel said on Thursday that relevant training and further education will be provided during the digital transition. 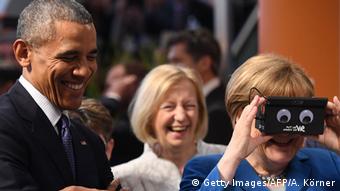 Merkel trying out virtual reality technology with former US President Barack Obama in Hanover, in 2016.

At last, it seems Merkel is picking up the digital ball that has been dropped repeatedly during her 13 years in office — a surprising oversight, given that as a trained physicist and quantum chemist, Merkel is no foe of research and technology.

As an academic at Karl-Marx-Universität — today Leipzig University — Merkel was one of the lucky few from the GDR who visited the West, specifically to look at technological developments. Back in 1986, it was computers, but even today, whether it's donning VR glasses at digital fairs or chatting with robots in Japan, Merkel appears to be fascinated. Now that same curiosity must be awakened in the rest of Germany.

Both China and Estonia have built digital public data systems that play a big role in everyday life. The major difference is China is exerting control and Estonia is fostering trust. (15.11.2018)

Will robots soon replace human decision-making in warfare? Even though no single definition for fully automated weapons systems exists, one thing is certain — they raise a host of legal, moral and arms-control questions. (14.11.2017)

Made in Germany - VR takes the world by storm

The field of robots