Germany in seventh heaven ahead of Euro 2020 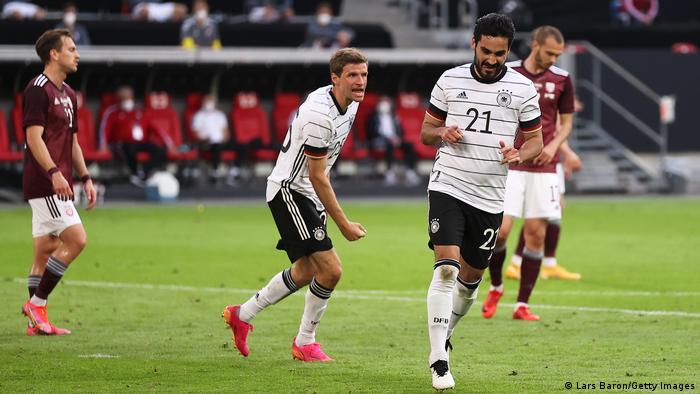 Gündogan celebrates his fine goal for Germany, their second of the night.

The joy is back for Germany. Granted, this comprehensive win was expected against the nation ranked 138 in the world but it has been a long time since Joachim Löw's side had this much fun on the field.

"The result was not the most important thing but the way we played football was. But when I think back it was a long time since we got a big win so it feels good," Thomas Müller told RTL afterwards.

Kai Havertz was superb, delivering on the instinct his game is built off, Thomas Müller got back on the scoresheet and Robin Gosens finally arrived in a Germany shirt. The news shortly before kick off that a member of the Latvia camp had tested positive for COVID-19 didn't stop the game going ahead as Germany's performance was the shot in the arm this team needed.

Games designed for the superior side to flex their muscles are rarely telling, but for this Germany team at this moment in time the friendly against Latvia really was. For a side desperately in need of a confidence boost, this couldn't have come at a better time. The 1,000 fans watching on in Düsseldorf were treated to a Germany side in full flow.

With Löw opting for Joshua Kimmich at right back, perhaps a sign of things to come for Germany's opener against France, Germany looked more expansive out wide. And aided by a clearly weaker opponent, Germany took advantage.

Havertz's movement allowed Gosens to score first and two minutes later Germany had two goals when Ilkay Gündogan smashed in a gorgeous strike. Two quick goals set Germany in motion and for the first time in a long time they kept going. Gosens cut one back for Thomas Müller to score in Germany colors again, Havertz got on the scoresheet and then Mats Hummels showed off his passing to set up Serge Gnabry.

The right time to find form

This was not a day for Manuel Neuer, who celebrated becoming the first German goalkeeper to make 100 appearances but was denied a clean sheet by wonder strike. This was a day for Germany to show their quality and feel good ahead of the tournament. Chance conversion issues were dispelled and the back three, thanks to lots of space and players full of intent, was not a problem.

Germany face France in Munich in just over a week, and Löw has called for more tempo and intensity than was on show in Düsseldorf. Up until then most of the talk will be about who will join Müller and Gnabry in attack and whether Kimmich will play in midfield or at right back. All the while, Germany quietly keep their momentum building.

Just last night, Germany's U21s were crowned European champions. The man in charge of all of Germany's football teams Joti Chatzialexiou said "no one put a cent on that team winning." And yet Stefan Kuntz's side did just that, with a victory of unity rather than because they have the best youngsters in Europe.

Löw's side do not have to worry about a lack of quality and much has been made of how united this team is. Maybe, right on cue, Germany have played themselves into contention. Or maybe it's just a big win against an inferior opponent. The answer will come in just over a week's time.

Relive Germany vs. Latvia on page 2: Kai Havertz wasn't among the goals but he was on song, forcing an own goal here for Germany's fourth.

FT — Germany 7-1 Latvia — An emphatic win sends Germany off to Euro 2020. Latvia were very poor, it must be said, but that was about as good as it could have been for Germany. Seven different scorers and a fine display by Kai Havertz. Mats Hummels and Thomas Müller both excellent too. Things are looking good for Germany, but safe to say, their opening game against world champions France will be a far sterner test. A great night for Germany though.

76' GOAL! Germany 7-1 Latvia — Sane makes it seven, a minute after Latvia had pulled one back. Good work by Werner to find Müller, who rolls it to his Bayern Munich teammate Leroy Sane, who slots it home from close range.

75' GOAL! Germany 6-1 Latvia — Latvia have one back and maybe the comeback is on. Germany caught half asleep at a throw-in and Aleksejs Saveljevs scores a fantastic goal, thumping it beyond Neuer from distance. Latvia's first shot on target results in a goal.

55' Germany have been relentless tonight. Playing at a superb tempo and absolutely ruthless in front of goal. They're building confidence at the perfect time, even if the opposition have been very poor.

50' GOAL! Germany 6-0 Latvia — Werner, fresh off the bench, makes it six. Kimmich, found by another substitute Sane, plays the Chelsea man in and Werner's deft touch, his first since coming on, takes the ball under Ozols.

That's half time — Germany just edging this one at the break.

45' GOAL! Germany 5-0 Latvia — It's five and this time Gnabry gets in on the act. Hummels spots Gnabry's run and the Bayern man's finish is spectacular, hooking it into the opposite top corner. Stunning. 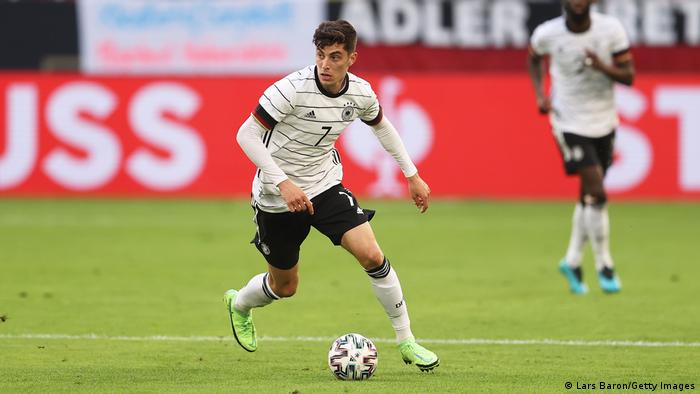 Havertz has been involved in Germany's first two goals

39' GOAL! Germany 4-0 Latvia — It's another one. This one is an own goal by Latvia's keeper Roberts Ozols, but it's all about Havertz, who has been Germany's star man tonight. He dances into a dangerous position and his attempt at a low cutback squirms under Ozols, who diverts it into his own net.

28' GOAL! Germany 3-0 Latvia — Müller grabs a third! It's such slick football by Germany, who are tearing Latvia apart here. Gnabry spots the run of Gosens, who cuts back perfectly for Müller, whose low first-time shot gives Roberts Ozols no chance in the Latvia goal.

21' GOAL! Germany 2-0 Latvia — Gündogan scores another! A minute and 25 seconds after scoring the opener, Germany have doubled their advantage and it's another spectacular finish. Again, Havertz is involved, picking out Gündogan from the right. The Manchester City man gets a luck break via Latvia's Kriss Karklins, but he rifles the loose ball ruthlessly into the top corner. Germany on fire.

20' GOAL! Germany 1-0 Latvia — Gosens has his first goal for Germany! He plays in Havertz, who disguises his cutback to the Atalanta man, who fires the ball into the roof of the net.

18' Gündogan dragged back as he's driving forward a Germany counter-attack. No sympathy from the referee, even in a friendly, and Arturs Zjuzins is in the book.

13' Germany controlling the game and they almost make the breakthrough as Kroos whips a devilish cross into the box but Gnabry can't quite make contact at the far post. The Bayern man was put off slightly by a Latvian defender Antonijs Cernomordijs, who threw himself at the ball.

3' An early chance for the returning Havertz, who hammers a low shot just wide of the far post. The Champions League final hero clearly brimming with confidence.

We're underway in Düsseldorf, where there are 1,000 fans in attendance tonight.

A ton for Neuer

Tonight will be a night to remember for Germany's No.1. He becomes the first Germany goalkeeper ever to reach the magic milestone of 100 caps.

Kimmich on the right

The most interesting tactical decision by Löw tonight is the deployment of Joshua Kimmich on the right side of Germany's four-man midfield, effectively being used as a right wingback. It's not his preferred position, but given Germany's embarrassment of midfield riches and relative weakness on the right side, it makes sense. Something to keep an eye on tonight.

The only absentee for Germany is Leon Goretzka, whose hip injury isn't deemed worth the risk by Joachim Löw.

Germany looking to bounce back

Germany's first warm-up game for Euro 2020 last week against Denmark ended 1-1, with a performance that was satisfactory but not amazing. Thomas Müller and Mats Hummels returned after two years away.

Havertz set for a role

Fresh from his Champions League-winning goal against Manchester City, Kai Havertz is set to feature for Germany in Düsseldorf on Monday night. The Chelsea attacking midfielder has been talking about how he's dealt with the hype in the past week, ahead of his return to the Germany setup.