Chelsea's Champions League winner Kai Havertz has kept his feet on the ground after European glory in Porto, but his "creative, instinctive, flexible" performances could be decisive for Germany at Euro 2020 this summer. 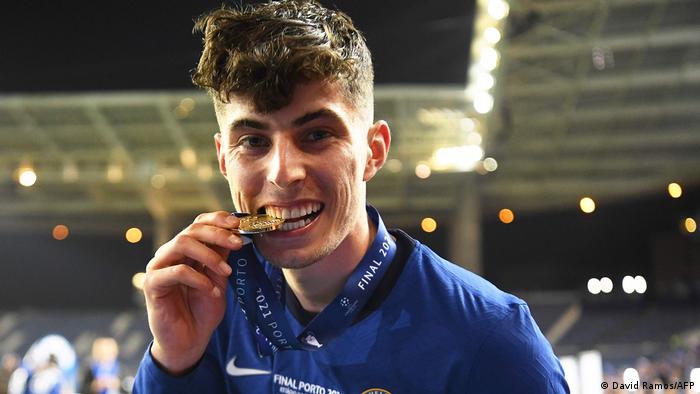 Kai Havertz could be the difference for Germany this summer

With Thomas Müller returning, Serge Gnabry full of goals and Joshua Kimmich Germany's best player, it seems odd to suggest that Germany's fate at Euro 2020 could be decided by Kai Havertz.

And yet, the Champions League winner arrives in the form of his life and playing in a position Germany are in desperate need of filling. If Joachim Löw can get the best out of Havertz, Germany might perform much better than many expect.

"Today, you play one good game and you're the best in the world," Havertz said after arriving at Germany's pre-tournament training camp in Seefeld, Tirol, highlighting that his winner in the Champions League final dispelled how tough his start at Chelsea had been.

"I knew last summer, and everyone said as much, that it would take half a year before I arrived [in London]. It was a huge change for me."

Initially played out of position, it wasn't long before much of the English press were questioning why €80 million ($94.8m) plus add-ons had been spent on a Bayer Leverkusen player. With the arrival of Thomas Tuchel though, Havertz blossomed, proving that player ability and value is deeply connected to coaching.

"When I was 17 I didn't understand it all when the hype arrived," Havertz said. Perhaps because, four years ago, Havertz was balancing football with school work — he famously missed a Champions League game for Leverkusen due to exams in 2017. Now, the interest in Havertz has solidified and the only tests he has to worry about are on the field.

Germany have had many false dawns in their hopes of filling a striking position that hasn't been adequately filled since Mario Gomez.

Ahead of his first start for Germany in 2019, Joshua Kimmich said Havertz had "an impressive feeling for space, superb ball control and a great overview." That feeling has only grown since, and now Havertz has a skill set that looks to fit perfectly with Germany's attacking options.

Löw couldn't make Mario Götze or Timo Werner work in that position but Havertz is different to both, not just when it comes to size either. This is a player who does not spearhead an attack, he steers and controls it.

But with Müller returning and Gnabry looking like Germany's most lethal forward, Löw certainly has a puzzle to solve when it comes to Germany's attack. In Seefeld, Löw looks to be working through that puzzle, regularly stopping practice in order to tweak Germany's approach. Surely though, his Champions League winning forward has to play a leading role.

"Thomas [Müller] and I don't play exactly in the same position but we both enjoy playing through the center," said Havertz. "But there are enough systems these days in which several attacknig midfielders can be on the pitch. I'm a creative player, I'm instinctive. I've played in lots of different positions in recent months, so I'm flexible."

Havertz will turn 22 years old the day Euro 2020 starts. After scoring the winner in a European final, Havertz hailed that week in Porto the best of his life and his goal one that will stay with him forever.

If his birthday is followed by a tournament-deciding performance, it might be time to start talking about this being the best year of Kai Havertz's career.

Chelsea’s defense of the Champions League remains on course after Kai Havertz and Christian Pulisic put them in control of their last 16 tie against Lille. Once again, Havertz elevated his performance when it mattered.

Germany deserved more from their draw with England in the Nations League. With seven changes from the draw in Italy, they finally played 'Flick football' against a big team, but a breakthrough win still eludes them.