Germany has ditched free COVID tests: Has it worked?

COVID-19 tests in Germany have been free since March — but not anymore. The strategy is to encourage more people to get vaccinated. Will it work? 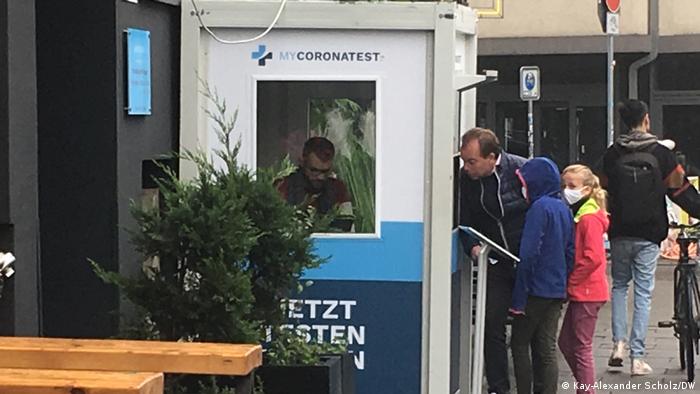 A COVID test center in Berlin

The small blue-and-white testing center on the sidewalk stands out on Berlin's Tor Street, known for its lively nightlife. The center looks like a gatehouse, and that is essentially what it has become. Beyond it are all the bars, restaurants and cinemas where only people who have recovered, been vaccinated or tested negative are allowed to go.

You can already tell that the COVID-19 rapid tests are no longer free, employee Hassan Ghazin said. He estimates the number of customers to be about "half as many" as previously, though there are still some people who don't have to pay. "That's about a third," he said.

Minors, people with low incomes and people who must be tested to end quarantine are exempt from fees, as are people who have to go to the doctor because they have symptoms.

Germany's new COVID-19 testing rules came into force on October 11. They are focused on the unvaccinated, who until now could take a free test and with a negative result go to a restaurant or other restricted area. A spokeswoman for the German Health Ministry emphasized that everything should stay "fair." This means that now "that everyone has the opportunity to be vaccinated, the general public should no longer be paying for free tests."

'Not a sensible step'

Janosch Dahmen, a physician and health expert for the Green Party's parliamentary group, criticized the decision made by Chancellor Angela Merkel and all the regional state premiers. "I don't think the move makes sense," he told DW. "We saw in the third wave how much the rapid tests in particular helped us to slow down infections." He noted that about 30% of the population is still not vaccinated. "Testing can still help to target measures more accurately," he said. "We don't know where the virus is, how fast it's spreading and amongst whom."

Austria, where a similar decision has just been delayed by six months, is doing better, Dahmen said. Only in March — after the end of the cold season — will testing will no longer be free of charge.

The pandemic is currently stagnating in Germany, at least in terms of the number of new infections and beds in intensive care units. "At the moment, we are at a plateau," said Gernot Marx, president of the German Interdisciplinary Association for Intensive Care and Emergency Medicine. About 1,400 patients are currently in intensive care units across Germany, down from a peak of nearly 5,800 cases. The situation is "under control," but according to him there can be no talk of easing the situation. How quickly the numbers can rise again has been shown in the Netherlands.

Free testing has been in place in Germany since March, when centers shot up like mushrooms in cities. Operators were paid €11.50 ($13.34) per test by the state. The physical tests cost around €5 ($5.80). For many this was a good business, but poorly conducted tests and billing fraud caused controversy.

Johann Nowak went into business much earlier and opened his first testing center with his son at his gallery in central Berlin. In the beginning, there was a lot of skepticism, the entrepreneur told DW. "Yet another registered company that's just lying around, and after one or two months it's over," is what many expected, he said. But in that time he has opened around 45 test stations in Berlin and in his home city of Frankfurt. He now estimates he has a total of 300 to 400 employees, and he himself has been working over-18-hour days for months.

He does not believe that business will decrease. In some cases, he says, customer numbers are even higher than they were weeks ago. "We are noticing differences in different neighborhoods," he said. "In poorer neighborhoods like Neukölln or Kreuzberg, the numbers are going down. There are many who walk away when you tell them they now have to pay for a test," Nowak said. "In richer neighborhoods like Mitte or Charlottenburg, no one seems to care."

The change is still new, but he is already thinking about introducing cheaper rates for students and others. A rapid test normally costs €19.90 at his company Schnelltest Berlin. This puts him in the middle of the pack in terms of price.

A general overview of rapid tests is generally lacking. The reports by the Robert Koch Institute (RKI) — the national health authority — refer only to PCR tests, the more medically accurate laboratory tests performed for verification after a positive rapid test. And even here, RKI says it does not have complete figures.

In the three days before the new rules came into force, the number of new vaccinations were 15% to 25% higher than before. But since then, the trend of falling new vaccinations that the RKI has registered since mid-June has continued. Here too, however, there are no precise figures.

Everything could have organized been better, said Dahmen, who argues that the government's official Corona-Warn-App could have been used as a central collection point. "State money for tests should only have been given after the test results were entered into the app," he said. "That way the results could have been recorded much faster and more regularly by the app, and rules concerning vaccination, recovery and testing could have been presented in a uniform and more tamper-proof way." Here, too, the digital crisis management of the Health Ministry had been "patchy" as "has often been the case during the pandemic," he said. 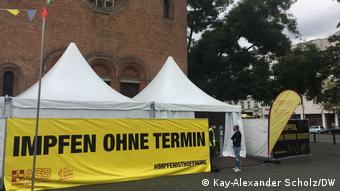 Dahmen's criticism of the federal government goes further. The test strategy had also been "inconsistently implemented," he said. A look at neighboring countries such as France or Italy shows that rules were implemented requiring vaccination, recovery or a negative test even on domestic flights or in trains or at the workplace, he said. "That's where we're incredibly patchy."

No demonstrations or major protests were reported following the introduction of the new rules. Only one incident was reported, at a test center in Dresden, the capital of Saxony, where a man demanded a free test and punched an employee when he was told to leave. The police intervened.

Dahmen said he saw "no exclusion of unvaccinated people." Not only are there are now doses available for everyone, but enforcement of rules in practice is relatively relaxed and documentation can be falsified. A test could be proved "partly with self-made slips of paper," he says. There is a "huge gap between the emotionality of the debate about equity of access and the consistency with which we actually enforce the rules."

Nowak finds another point worth considering. Now even vaccinated people no longer receive free tests. He said this was "negligent." There have been many so-called breakthrough cases — cases when someone fully vaccinated is nonetheless infected with the virus. The RKI has reported 80,000 breakthrough infections, though the cases are generally much less severe than normal infections. Nowak has seen positive cases among vaccinated individuals at his test center. He believes an exception should be made for vaccinated people as well so "they can get tested before they go to a family party or other events."

For now the business of testing will continue. Perhaps there will be other changes to the rules. The mayor of Freiberg, a city of 40,000 in Saxony, announced that he would pay for residents' tests out of his own pocket. This will probably cost €14,000 by the end of the year, he said. In Germany's federal structure, that is also an option.

Some countries are reporting more new coronavirus infections compared with the previous two weeks. Global data trends show that the coronavirus pandemic isn't over yet. DW sums up the current situation in three charts.

The hospitality sector in Europe is breathing a sigh of relief. Many countries have eased restrictions on everyday life, making tourism possible again. DW Travel offers a brief recap of what rules apply in the EU.