Germany's vaccination rate could be higher than previously thought

A survey by the Robert Koch Institute has revealed that some 3.5 million more people may already be vaccinated. German Health Minister Jens Spahn has happily welcomed the news. 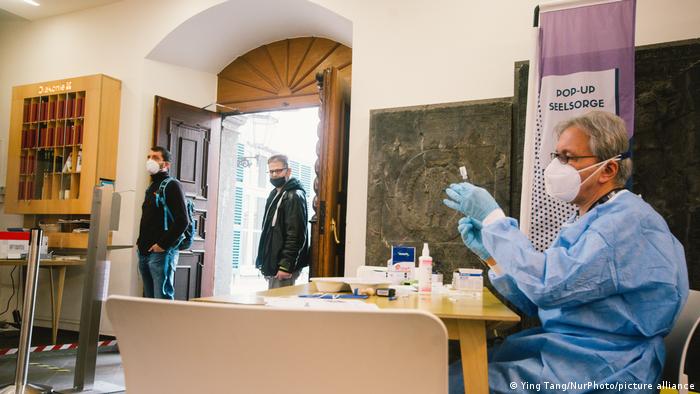 Germany's Robert Koch Institute (RKI) for prevention of diseases said on Thursday that the number of people in the country who have been vaccinated may be higher than previously thought.

This is according to a telephone survey commissioned by the RKI, where a higher proportion of respondents said they had been vaccinated than suggested in the official records, reached by counting the number of recorded vaccinations and comparing against the estimated total population.

Based on their estimates, some 80% of people in Germany have received both jabs, with 84% having received at least their first. The estimates put the total share of vaccinated people at around 5 percentage points higher than official data — around 3.5 million people.

German Health Minister Jens Spahn celebrated the news on Twitter saying that "this provides us with additional security for the autumn and the winter."

He went on to say that with this higher rate of vaccination, hygiene and mask rules could be dropped for outside areas, even if some restrictions remain in place inside or on public transport.

"We've not yet reached our goal, but from today's perspective there will be no need for further restrictions," Spahn said.

Why has the vaccination rate changed?

According to the government-run dashboard that keeps track of vaccinations, 65% of the total population — equivalent to a little over 54 million people — had been fully vaccinated by Wednesday.

The difference between the numbers collected by the government and the new figures arising from the survey were likely down to a failure to report some of the given jabs or other factors like people being vaccinated abroad or no longer residing in Germany despite still being on medical records.

Neighboring countries like Denmark, which already reached a vaccination rate of around 80%, have ended their coronavirus regulations.

Around 1,000 people were interviewed for the survey. Researchers who analyzed the data also found that the share of people in Germany who were willing to be vaccinated was around 93%, higher than previously thought.

RKI pointed out that their survey only including German speakers and people who were reachable by phone. This means the data was not valid for more vulnerable groups such as homeless people or recent migrants who do not yet speak German.

"There is a presumption that language barriers also lead to lower uptake of COVID-19 vaccination," the RKI report said.