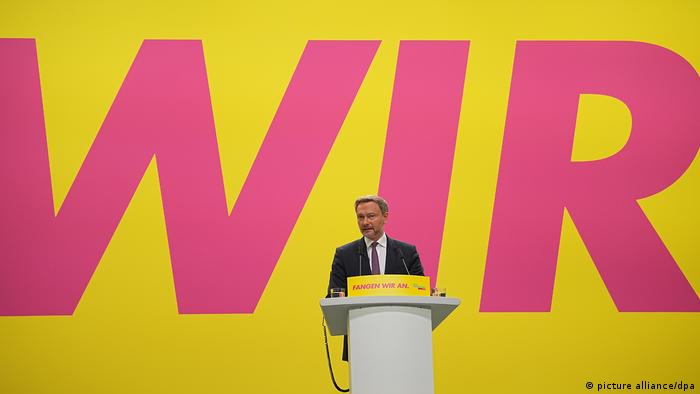 Christian Lindner, the head of the Free Democrats (FDP), is set to become Germany's next finance minister

The neoliberal Free Democratic Party (FDP) on Sunday backed the coalition agreement negotiated with the center-left Social Democrats (SPD) and the Green Party.

At a special party conference in Berlin, some 92.4% of party members voted in favor of the deal. The decision brings acting Vice-Chancellor and Finance Minister Olaf Scholz one step closer to taking the reins from Angela Merkel as Germany's next chancellor next week.

Party leader Christian Lindner, who is set to take over as Germany's next finance minister, sought to allay the concerns of the FDP's more conservative wing, describing the coalition agreement as one that pushes centrist policies.

The deal "does not push our country to the left, rather it wants to lead the country forward," he said.

Before the vote, Lindner added, "I am convinced that this country will profit from this coalition."

The vote was held with only key party officials physically present and the other participants joining online, due to COVID restrictions.

The center-left SPD, Greens, and FDP have been in talks for two months after the SPD emerged as the largest party following Germany's election on September 26.

The approval of FDP members was widely expected as the party, which will be the smallest in the coalition, negotiated well and secured several key ministries.

The party managed to secure promises that included: no tax hikes, no introduction of speed limits on the German autobahn, and no end to private health insurance, which is enjoyed by 11% of the German population.

Two down, one to go

The SPD approved the 177-page coalition deal at a party conference on Saturday, with more than 98% approval from delegates.

The Greens are also holding a ballot of party members this weekend, with the result expected Monday.

If all parties approve the plans, the agreement will be signed by all parties a day later, allowing Scholz to formally seek election as chancellor in the Bundestag on Wednesday.

Germany will then have a so-called traffic-light coalition, a reference to the three parties' colors.

The new alliance will replace the grand coalition of the conservative Christian Democratic Union (CDU) and the SPD — the two largest party blocs in parliament, who have dominated German politics since the end of World War II.

Angela Merkel is stepping down after 16 years as chancellor.

What are the key issues for Germany's new government?

Germany's incoming coalition — made up of Social Democrats, Greens and the neoliberal FDP — has agreed on a political road map. DW takes a look at the key issues they're taking on, including the COVID pandemic.