As the European Union prepares to accept ten new members on May 1, Germany is growing increasingly uneasy that Eastern European countries with low corporate taxes could lure away businesses. 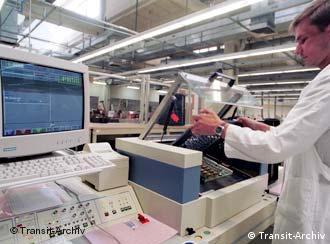 Electronics giant Siemens has already moved some production to Poland.

German Chancellor Gerhard Schröder said on Monday there needed to be a "critical debate" over how to avoid tax competition between the old and new EU members. He pointed to the fact that the average corporate tax level in the new member states was roughly 10 percent lower than in the old EU states.

"This creates a competitive situation that is problematic for the current members of the European Union," Schröder said according to the Associated Press.

Both Schröder's government and Germany's conservative opposition are worried once the EU expands, companies will be tempted to move production facilities to Eastern European countries with rock-bottom labor costs and taxes. Such a migration would undermine Germany's tax base while moving jobs abroad.

German politicians are particularly sensitive to corporate tax issues, since Germany has some of the highest non-wage labor costs in the world and the country borders the largest new EU member Poland. Whereas the tax burden for companies in Germany averages around 39 percent, Poland lowered its corporate tax rate from 27 to 19 percent this year. Several other EU accession countries have even lower rates.

"It's at levels at which Western Europe cannot compete with," tax experts at the Chancellery told the Süddeutsche Zeitung newspaper.

A recent study by the Cologne-based Institute for the German Economy (IW) said all of the new EU countries were taking an aggressive approach toward poaching western firms. "Low tax rates are, after small labor costs, the second most import reason for moving production to a new location," IW economist Winfried Fuest said.

The EU will expand in May to include Poland, Hungary, the Czech Republic, Slovakia, Slovenia, Cyprus, Malta, Lithuania, Latvia and Estonia.

Bavarian premier Edmund Stoiber said this week said it was unacceptable that the EU was funding major development and infrastructure projects in the new member states while they used low corporate taxes to entice companies to abandon old EU countries.

"It cannot continue that we give these countries financial aid via the EU that they then use to keep their taxes low," Stoiber said at a regional meeting of his Christian Social Union party.

The calls by German politicians to combat the Eastern European tax advantages comes on the heels of a firestorm ignited by comments made by Ludwig Georg Braun, president of the German Chamber of Commerce, who recommended German companies should move jobs to low-wage former-communist EU countries.

Schröder and other members of his Social Democratic party called Braun's suggestion "unpatriotic" at a time when German unemployment hovers at 11 percent.

Despite Germany's concern, there is likely little the old EU members can do to keep Eastern European countries from using low taxes to encourage foreign investment. The current 15-member EU has haggled for years over implementing a minimum corporate tax level to curb competition for firms within the bloc. But the talks in Brussels have not kept Ireland from slashing its corporate tax rate to 12.5 percent.

The president of Germany's Chamber of Commerce has advised German businesses to move production overseas to lower costs, prompting some politicians to call his remarks "unpatriotic." (March 22, 2004)

As the countdown for EU expansion continues, many small and medium-sized German companies are growing increasingly fearful of the impending competition from across the borders. But some firms can hardly wait. (March 6, 2004)

The EU's expansion eastwards will lower EU funding to the former East Germany and could mean a higher jobless rate. A new government strategy aims to push the region's strongest industries to carry the rest along. (March 2, 2004)