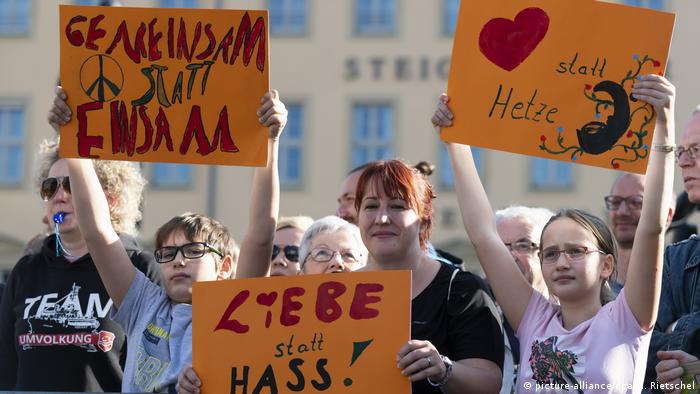 Four counterdemonstrations were held in the eastern German city of Dresden on Sunday in opposition to the anti-immigration group PEGIDA's fifth anniversary rally.

The anti-PEGIDA marches, which began at 12 p.m. local time (1000 UTC) at separate locations across the city, drew around 8,000 people, according to the organizer. The four groups of walking protesters later joined up in the city center.

The Herz statt Hetze (Heart Not Hate) alliance said it organized the counter-rallies in support of tolerance and open-mindedness and so that PEGIDA's fifth anniversary would not pass without being challenged.

In addition to the marches, a prayer for peace was planned.

The rallies were called after PEGIDA, which stands for "Patriotic Europeans against the Islamization of the West," moved its regular Monday rally to Sunday to celebrate the movement's fifth anniversary.

Although the opposing rallies were peaceful, at one point during the PEGIDA protest, one 62-year-old supporter gave a Nazi-era Hitler salute, prompting a police investigation, according to a tweet from Saxony's police.

Making the Nazi salute is a crime in Germany punishable by a possible custodial sentence and a fine.

Last year, a 33-year-old was sentenced to eight months' probation and a €2,000 ($2,300) fine for making the Hitler salute during far-right protests in Chemnitz.

During their Sunday rally, PEGIDA speakers announced to supporters a close alliance with the far-right Alternative for Germany (AfD) party, which is the third-largest party in the lower house of the federal parliament, the Bundestag.

The group's Monday marches are often attended by AfD politicians, including the leader of the AfD's nationalist wing, Björn Höcke, along with Andre Wendt, who was recently elected vice president of Saxony's state parliament.

Far-right speakers also hit out at the Protestant Church and the media, especially Germany's public broadcasters, which prompted chants of "lying press" from participants. 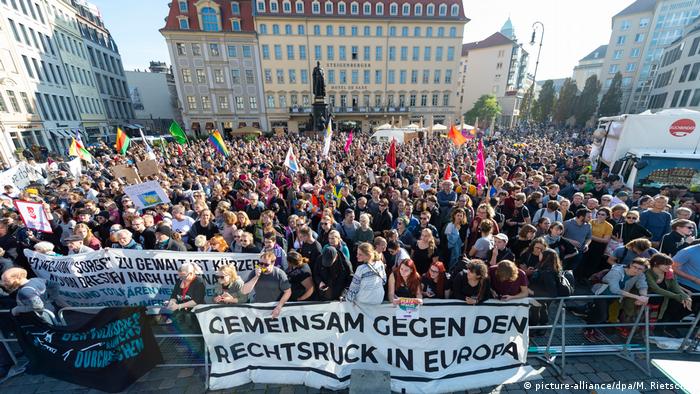 One of the banners displayed at the anti-PEGIDA rally read, 'Together against the shift to the right in Europe'

PEGIDA held its first protest in Dresden on October 20, 2014. The group's rallies gained traction a year later as Germany welcomed more than a million newcomers at the height of the European migrant crisis.

PEGIDA has, however, recently seen a large drop in support .

The movement's leader, Lutz Bachmann, has repeatedly been convicted for incitement and other crimes.

Earlier this month, police launched a new investigation into Bachmann after he used Nazi slogans to describe his opponents and openly called for them to be killed.

Singling out Green and socialist Left party politicians, he used the term "Volksschädlinge," a Nazi term meaning "parasites of the people."

He said such politicians were standing on the "degenerate side" of the trench that now runs through the heart of German society, and that they should be pushed into that trench and buried.