Several Western countries are vying for a seat on the UN Human Rights Council. Germany is pushing for a stronger Council, while hoping to remain an important player within the UN. 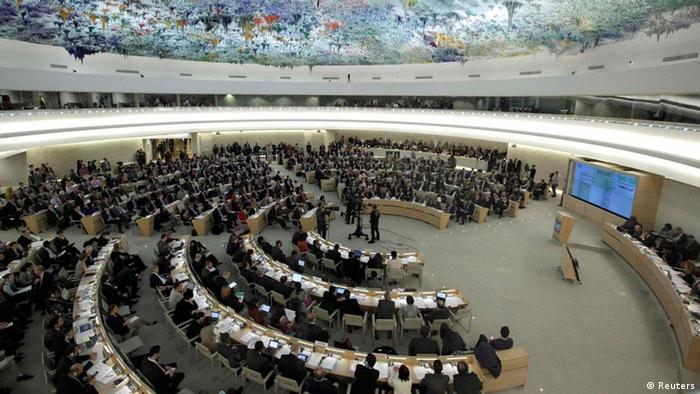 At the end of the year, Germany will complete its term on the UN Security Council. In an attempt to continue to play an important role within the United Nations, the German government has stepped up its campaign for a seat on the UN Human Rights Council.

"Germany is prepared to take on responsibility and shape the work of the Council. The protection of human rights is a core principal of Germany's foreign policy," a spokeswoman of the German Foreign Ministry told Deutsche Welle. "That is why we are applying for membership for the period of 2013 to 2015." 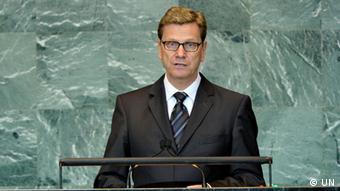 German Foreign Minister Guide Westerwelle flew to New York last week to support the German bid. To a selected audience at German House, a building opposite UN headquarters in New York that houses various German political and cultural institutions, the Minister stressed that human rights were of utmost importance to his government. "It's important for us to openly address the issue," he said.

In an interview with DW, the director of the German Institute for Human Rights, Beate Rudolf, acknowledged that Germany has been a strong advocate of human rights within the UN system. "On the UN Security Council, Germany has actively pushed for the protection of child soldiers. Germany also promotes fundamental rights, including the right to adequate housing and the right to water and sanitation." This track record, Beate Rudolf believes, makes a good case for Germany's election to the UN Human Rights Council.

The German government is competing for a seat in the Western and "other countries" group. Belgium, Norway and the USA are completing their term, vacating three of seven seats. Germany is running against the USA, Sweden, Ireland and Greece. Given Barack Obama's pro-UN stance, the US is likely to regain its seat. Accordingly, Germany's chances for one of the remaining two seats are relatively high. 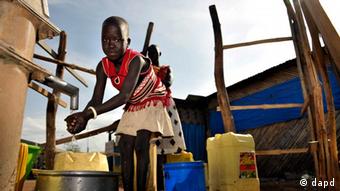 Germany is pushing for the right to clean water

In 2006, the UN Human Rights Council replaced the former United Nations Commission on Human Rights. The Council is widely seen as more assertive. Its 47 members, who can only serve two consecutive terms, are elected by secret ballot in the UN General Assembly. The "Western Group", comprised of seven members, is one of the smallest groups. Eastern Europe, with six members, is the smallest. Africa and Asia (13 members each) are the largest groups. Latin America and the Caribbean are represented by eight countries respectively. Germany held a seat from 2006 to 2009.

In its current bid, Germany has committed itself, should it be chosen, to expanding the leading role of the Human Rights Council in protecting human right worldwide. Furthermore, Germany has stressed its willingness to take on joint responsibility in order to further the Council's activities and to strengthen inter-regional cooperation.

Beate Rudolf, of the German Institute for Human Rights, calls these promises "very vague." She has three concrete expectations of the German government, should the application be successful. They include the rights of senior citizens as well as the extra-territorial application of fundamental rights. "Basically, it's a question of protecting human rights during military missions, or how to make sure that companies operating outside their own nation's borders adhere to human rights standards." 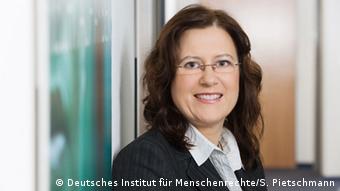 Beate Rudolf from the German Institute for Human Rights

Rudolf's third demand is that Germany should actively push for more cooperation between the UN Security Council and the UN Human Rights Council. "It would be desirable for the Human Rights Council to become a kind of early warning system, on the basis of which the UN Security Council would take action whenever human rights are seriously violated."

Additionally, the UN Security Council should ensure the protection of human rights within its own actions, including "when sanctions are imposed that affect civilians."

After two years as a non-permanent member, Germany completes its term on the UN Security Council at the end of this year. Berlin was strongly criticized by its Western allies, when it abstained during the resolution on the military intervention in Libya in March 2011. Many saw the abstention as a sign of international isolation. The German Foreign Ministry refuses to comment on whether that abstention may have a negative impact on its current bid.

Rebuilding the rule of law

When violent conflicts have suspended the rule of law, foreign experts can help to rebuild the judicial system. But they can only be successful if they treat local partners as equals. (27.10.2012)

UN-Arab League envoy Lakhdar Brahimi has called on China to play an active role in ending the civil war in Syria. Meanwhile, government warplanes continue to bomb the suburbs of Damascus. (31.10.2012)

UN peace envoy Lakhdar Brahimi has warned the situation in Syria is "getting worse." Warplanes launched their heaviest airstrikes yet on Monday as two car bombs hit the capital, violating a would-be four-day ceasefire. (29.10.2012)

"Of course, the abstention has had a negative impact on Germany's human rights work within the UN," Beate Rudolf told DW. But she adds that Germany is committed to strengthening the Human Rights Council. But whether that works in Germany's favor remains to be seen: "Whether countries who are in favor of a weak Human Rights Council will want to vote for Germany is another question altogether," she said.

The selection of new members for the UN Human Rights Council is beng held on Monday (12.11.2012).