Germany draws up new plan to dispose of nuclear waste | Germany| News and in-depth reporting from Berlin and beyond | DW | 12.08.2015

Germany draws up new plan to dispose of nuclear waste

The German government has presented its plan for permanently disposing of nuclear waste. Critics say the proposal is a tacit admission that it is a bigger problem than it has ever acknowledged before. 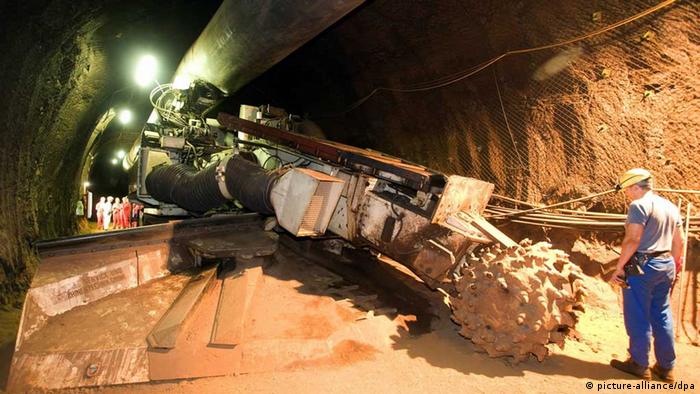 Pausing only to get the okay from the cabinet, Environment Minister Barbara Hendricks gave a press conference on Wednesday to present the government's brand new plan for dealing with radioactive waste.

The plan foresees two locations: one site for low- to medium-radioactive waste is already being converted - the Konrad Shaft, part of a disused iron ore mine near the town of Salzgitter in northern Germany. But the other location, for highly radioactive waste, has yet to be found.

The new news is that Konrad would not be extended, as had been previously proposed, and this unknown new location would therefore also have to house any radioactive waste produced between now and 2022, when Germany plans to shut down its last reactor. 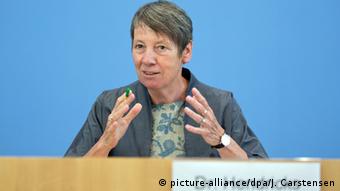 But the plan for dealing with the waste has a much longer time-scale, one which makes clear just how dangerous nuclear waste is to dispose of. Next year, a parliamentary commission will present its findings on the options, but an actual location won't be chosen until 2031, and it will take until 2050 to convert that site until it is ready to store the waste. The process of moving the waste there will then take several more decades.

But even that is optimistic, according to German environmentalists. "We're very, very skeptical of both those deadlines," said Olaf Bandt, head of the German environmental organization BUND. "It's a complex business. Not only that, but we want local populations to be included in the process."

"What became clear at the press conference is the huge amounts of highly-radioactive and medium-radioactive waste that actually exists, and in what ways we will be confronted with it in the next decades when we try to dispose of it safely," Bandt told DW. "We have called for it for some time, and now the government is finally admitting how much there is."

In Germany's defense, Hendricks was at pains to point out that, compared to other countries, the government's plans for dealing with nuclear waste were actually well-advanced. "There is no safe permanent disposal site in existence anywhere in the world," she told reporters. Not only that, she added, Germany has a comparative advantage: since it has a fixed deadline for shutting down its last reactors, authorities can estimate how much waste they will be dealing with. "Those countries that continue to use nuclear power should really be further along."

France is also in the process of constructing a site in the village of Bure, though that has not pleased Germans either, since it is only 120 kilometers (75 miles) from the German border.

But Bandt thinks Germany shouldn't be so quick to pat itself on the back. "Germany has for many years been pursuing an unsuitable plan," he said. "They had the site at Asse [a disused salt mine used to store nuclear waste that was found to be unsound]. They always thought that would be a safe site for decades, centuries, millennia. But it's completely failed, and in 2013 they had to admit they'll have to get the waste out of there again." 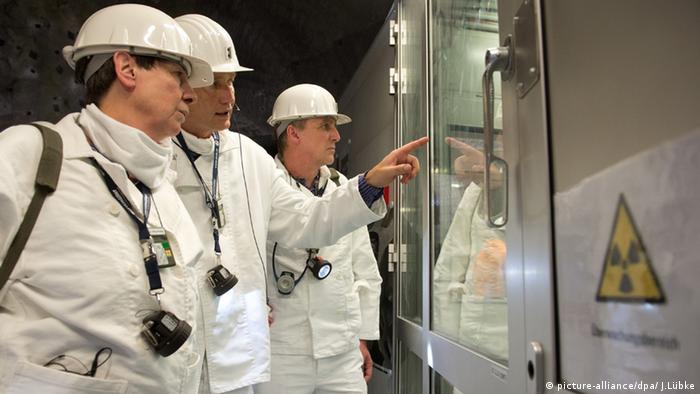 The storage site at Asse was found to be unsafe

Indeed, though Hendricks' plan was a very important step, it also showed that Germany is still at the start of its search. For the past year, a parliamentary commission has been scouring Germany for a place to store the country's highly radioactive nuclear waste. The commission has been working on a "carte blanche" principle - in other words, every German state is open to consideration except the city states of Berlin, Hamburg, and Bremen.

But Bavaria, home to three of the eight German nuclear power stations still running, has apparently withdrawn itself from consideration. "According to the findings of the Bavarian state office for the environment about the underground geological substrate, the locations in Bavaria are not suitable for permanent disposal," the Bavarian Environment Ministry told "Der Spiegel" magazine on Tuesday.

The statement caused much outrage in other German states, but Bavaria has long cleaved to this view - State Premier Horst Seehofer had to take a lot of criticism from his own party, the Christian Social Union, when he agreed to open the state to consideration in 2011.

Meanwhile, geologists have already ruled out large swathes of the country as unsafe to store the waste. Any areas where layers of earth could move, or in which water or gases could seep through are out, as are Germany's few areas of minor tectonic activity - the Swabian Alps in Baden-Württemberg or the Upper Rhine Plain near Frankfurt.

What they are looking for are deep, dry mines or layers of solid rock - most of these are in northern Germany, though some regions in the south and southeast are still under consideration.

Join the discussion and add your comment below. Thread closes after 24 hours.

Nuclear power is one of the world’s top energy sources and one of the most contentious. What lies behind the controversy? (12.08.2015)

France wants to build a permanent nuclear waste storage facility not far from the German border. The plan has irked many in the region, but the government in Berlin sees no need for action. (04.08.2015)