Thousands of people each month still request a look at the files that the former GDR's feared secret police, the Stasi, had kept on them. 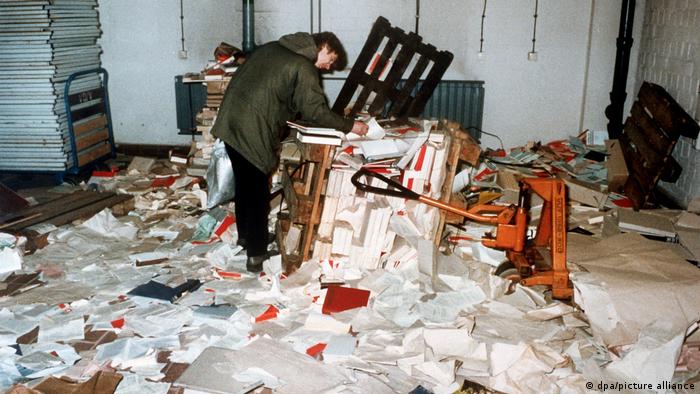 Germany's  agency dedicated to managing former East German Stasi files formally closes on Thursday, but the information stored within it will be incorporated into the broader Federal Archives (Bundesarchiv) facility instead. Despite the relocation, officials would continue processing and researching the massive archive, said State Secretary for Culture and Media Monika Grütters.

The Stasi (formally the Ministerium für Staatssicherheit, or Ministry for State Security) kept tabs on about 6 million people, more than a third of the population in the now-defunct East Germany (GDR). The feared security service was disbanded just months after the fall of the Berlin Wall. However, opposition activists managed to save its files from destruction.

Thursday marks the last day of the designated agency that had been managing the files for the last three decades. The material will now be transferred to federal archives.

Stasi files: Piecing together your own past

In this way, it will be preserved for the future with the public gaining "improved access to the files," said Grütters.

Reclaiming a 'piece of stolen life'

Germany allows private citizens to look at files the Stasi might have had on them or their close relatives. Some 3,000 requests are filed each month.

Talking to DW, spokeswoman for the records agency Dagmar Hovestädt said the archive should be kept on indefinitely. By looking through Stasi records, survivors can "regain control over a piece of stolen life," she said.

"There is a huge amount of files ... writing, much more and video footage, photographs, they document 40 years of secret police activity in the East German communist dictatorship," Hovestädt said.

"New generations need to interact and understand the history of this period."

Echoes of the 1953 uprising

The end of the records agency also means the last day on the job for its head, former dissident Roland Jahn. The 67-year-old has served under the official title of Federal Commissioner for the Records of the State Security Service of the former GDR.

"We've done right by the victims, and we've built a bridge into the next generation," he told the DPA news agency.

The choice of date for transferring the files, June 17, also bears symbolic significance for East German history. On this day in 1953, the GDR regime and Soviet troops crushed a popular uprising against their rule. It is believed that over 100 died, but the death toll remains unclear.

Jahn called for the date to be marked as a holiday to honor all victims of the East German regime.

What has the war in Ukraine brought? How important is finding cultural identity in the former Soviet Union? Filmmakers and eastern European experts describe the impact and background behind Russia’s war of aggression.