A German court has ruled that an election campaign poster saying "Migration kills!" is partly accurate and does not incite racial hatred. The poster was part of the campaign of the extreme-right NPD party. 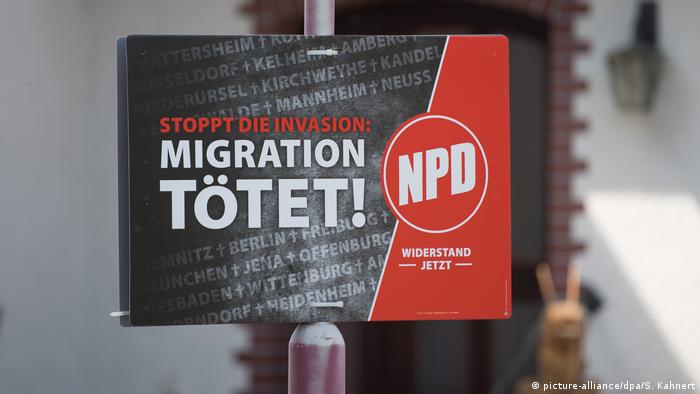 A German judge ruled that an election campaign poster reading "Migration kills!" was a partly accurate description of reality and does not incite racial hatred.

The decision was made in the city of Giessen near Frankfurt, according to German media outlets the Legal Tribune Online and the Redaktionsnetzwerk Deutschland.

The election poster was commissioned by the National Democratic Party (NPD), a far-right nationalistic political party often described as "neo-Nazi." The NDP has no elected members in any regional parliament, the Bundestag or the European Parliament.

The ruling came after the party sued the state of Hesse earlier this year because the mayor of the small town of Ranstadt blocked the NDP from displaying the posters.

The campaign poster was used ahead of the European parliamentary elections earlier in 2019. In full, it reads: "Stop the invasion: Migration kills!"

Judge: Immigration could lead to 'death of German culture'

Judge Andreas Hofer, who made the decision, cited "historical movements of people" from 5,000 years ago to the present day that directly led to "death and ruin," including the expulsion of the Israelites from Egypt and the colonization of the Americas. On that basis, he said that the poster "at least partly reflected reality."

Hofer had previously spoken negatively about the state of immigration in Germany, and in 2015, he said that "abstractly, too much migration in the form of immigration to Germany could lead to the death of German culture," according to media reports.

He alone made the court ruling that the poster was at least partly accurate. The August ruling can be appealed.