Germany coach Joachim Löw has criticized FIFA's plans to expand the World Cup to as many as 48 teams. Löw said the world governing body needed to be careful not to damage a good product. 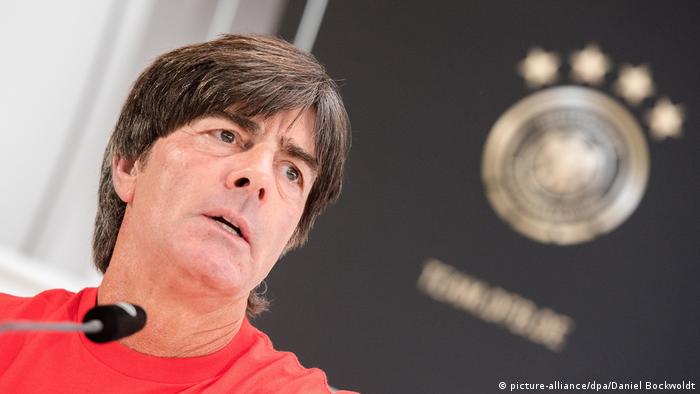 Joachim Löw used an interview with the DPA news agency published on Monday to warn both FIFA and the European governing body, UEFA, against expanding national team tournaments.

"FIFA and UEFA are responsible, they need a sense of proportion and have to find the right balance between commercial interests and a sporting perspective," Löw told the German agency.

"If you look at things over several years, the top players are physically and mentally at their limits. You have to be careful that you do not overdo things with too many games, because the quality must not suffer," he said. "Fans would then also turn away and the interest would subside. If you have a good product, like football, you should also think about limiting it to keep the quality high."

Löw added that at its current 32 teams, the World Cup was "absolutely balanced."

He also criticized the fact that at last summer's European championship a team such as the eventual winners, Portugal, were able to advance from their group with just three points and without having won a match.

The national team coach's comments came after the president of the DFB German football association, Reinhard Grindel publicly announced that he had dropped his opposition to FIFA President Gianni Infantino's plan to increase the number of teams involved in the World Cup.

However, following a meeting with FIFA Secretary General Fatma Samoura at the DFB's Frankfurt headquarters two weeks ago, Grindel said he could only back World Cup expansion if certain conditions were met.

"I have made it clear that no additional burden must be placed on the players and the length of the tournament should not be extended," Grindel said.

In the DPA interview, Löw also differed with the DFB president on the Confederations Cup, which Grindel has suggested, should be scrapped.

"There are, of course, different perspectives. But for some players, participating in such a tournament can really be a good opportunity to present themselves and play to a higher international level," Löw said.

"One advantage is that at the Confed Cup you have the opportunity to integrate young players better than with individual qualifying matches, which surely will be important with regard to the World Cup," he added.

The FIFA Council is to meet on January 10 in Zurich, when its members are to decide whether to expand the World Cup from 32 to 40 or even 48 teams.