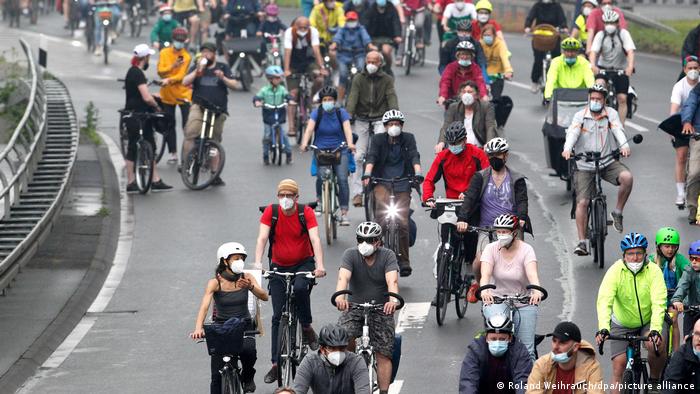 Cyclists and climate activists protesting on the B54 near Dortmund

The diverse protests led by activist groups such as Robin Wood and Sand in the Gears [Sand im Getriebe] claimed "excessive" costs — put at €200,000 ($243,000) per meter for Berlin's A100 autobahn extension — will exacerbate the global climate crisis instead of being invested in reducing greenhouse gas emissions.

'Trail of destruction through Berlin's middle'

At least 400 protesters entered a construction site along Berlin's A100. Others also staged a sit-down blockade, claiming the A100 extension would leave a "trail of destruction through Berlin's middle."

Saturday's protests also focused on the partly built A14 Autobahn, which is intended to link the Baltic Sea port city of Wismar in Mecklenburg-West Pomerania state with Dresden city in Saxony state by 2030.

At Wittenberge in Brandenburg state, 210 kilometers (130 miles) northwest of Berlin, activists occupied a raft on the river Elbe to protest an A14 segment under construction that also transects Saxony-Anhalt, scene of a key regional state election on Sunday.

And near Dortmund in North Rhine-Westphalia state, police said 2,500 activists staged a cycle protest along the multi-lane federal highways (Bundesstrassen) B1 and B54, demanding alternative unhindered fast cycle routing.

Near Kassel in Hesse state, 100 protesters staged a 15-minute cycle protest,  riding between an on- and off-ramp of the Autobahn 49.

Pedestrians and cyclists are normally strictly banned from Germany's highspeed autobahns, which are restricted to cars and heavy vehicles.

During Saturday's protest on Berlin's A100, police detained 13 journalists on trespass charges as they reported on that demostration.

The journalists' union DJU, affiliated to the public sector union Verdi, complained of "massive interference" in press freedoms. Police claimed the journalists had congregated with the activists instead of observing them at a distance.

No speed limits — yet — on the Autobahn

Hundreds of cases of beer tumbled out of a truck and onto the autobahn in southwestern Germany, destroying an estimated €12,000 worth of beer. Emergency teams worked for over six hours to clean up the mess.

In Germany, highway churches offer refueling for the soul.