Lower Saxony's Interior Ministry said a letter had been posted on the internet claiming responsibility for the attack in the city of Braunschweig. 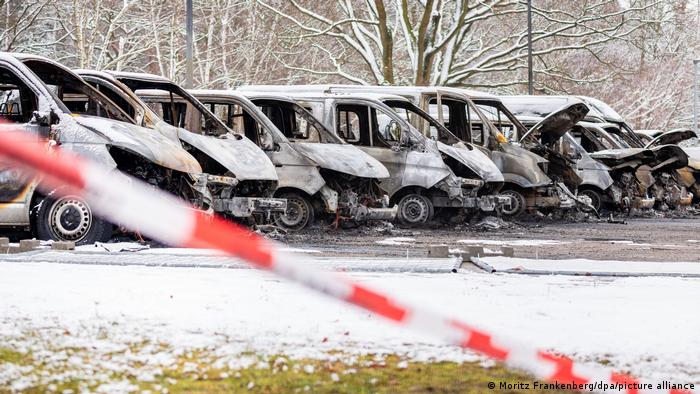 The state's criminal police office will take over the investigation

Authorities in Germany's northern state of Lower Saxony said Saturday police detectives were probing a blaze that destroyed 10 vans and a trailer in the city of Braunschweig.

They suspected that left-wing extremists were behind the fire on the premises of LAB, the state authority that organizes the reception and accommodation of asylum applicants in Lower Saxony. The office also supports the municipal immigration authorities with deportations.

On Friday night, 50 fire brigade personnel were deployed to extinguish the burning vehicles on the LAB grounds, spanning 6.4 hectares (15 acres). No one was hurt in the fire.

Incendiary devices were also found in a building belonging to the same authority in the district of Langenhagen, near the airport in the state capital, Hanover, but they did not ignite.

"Nobody in Germany has the right to ruthlessly and with sheer force implement their own political goals," said Boris Pistorius, Lower Saxony's interior minister.

The state's far-left scene was experiencing a "strong radicalization," and was developing into a "terrorist structure," he said.