The former member of the Gambian armed forces is suspected of involvement in crimes against humanity, murder and attempted murder under then President Yahya Jammeh. 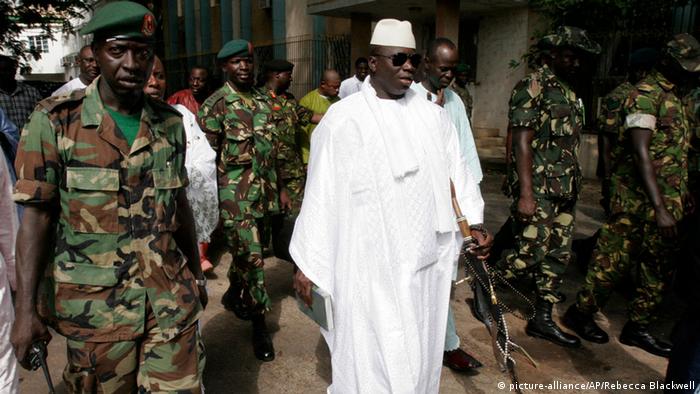 German prosecutors on Tuesday said a Gambian national had been taken into custody, and his apartment searched, over alleged crimes against humanity, murder and attempted murder.

The individual, named only as Bai L., was accused of being part of a military unit used to carry out kill orders at the behest of then-president, Yahya Jammeh.

The arrest warrant said he belonged to a so-called "Patrol Team" of the Gambian military, also known as "Junglers."

The unit was used by the Gambian president at the time to execute illegal kill orders, among other things. The goal was to intimidate the Gambian population and suppress opposition.

Bai L. is accused of acting as a driver for the unit between December 2003 and December 2006.

He is alleged to have been involved in a total of three such liquidation orders, driving unit members to attack sites.

Among those targeted was a journalist who was critical of the government, murdered in 2004, and a lawyer who survived an ambush a year earlier.

In 2006, members of the unit also shot and killed a suspected opponent of the Gambian president near the Banjul airport.

Who is Yahya Jammeh?

Jammeh ruled the small West African state for more than two decades, having become president in 1996, two years after a bloodless coup d'etat.

He fled the country in January 2017, having lost a presidential election to then relative unknown Adama Barrow.

The Gambia subsequently established a Truth, Reconciliation and Reparations Commission to examine rights violations carried out in the Jammeh era.

The commission has heard testimony about death squads and state-sponsored witch hunts, as well as torture and rape.

Jammeh is accused of having stolen millions of dollars from the country's coffers to fund a life of luxury. Upon leaving office, his assets were frozen by many countries and he went into exile.

As well as facing charges of corruption and human rights violations, Jammeh is also accused of several counts of rape.