Germany and Turkey agree to work harder on integration | Europe| News and current affairs from around the continent | DW | 09.10.2010

Chancellor Angela Merkel met with Turkish Prime Minister Recep Tayyip Erdogan in Berlin with a range issues on the agenda. Among them was the integration of Muslims in Germany, a much-debated topic in recent weeks. 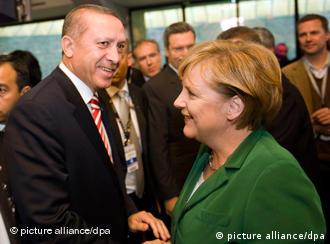 Merkel and Erdogan said the aim was not assimilation 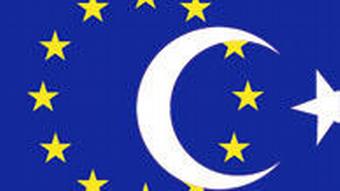 Erdogan stressed a need for a solid prospect of EU membership

Both leaders pledged more to improve the integration of Germany's 2.5-million-strong Turkish minority after the issue became a focus of public discussion.

Following the meeting, Merkel said Germany should use the 50th anniversary of a guest worker pact between Germany and Turkey to take a look at the ongoing problems of integrating immigrant groups.

"We propose that everywhere in cities and towns where there are people of Turkish origin, we use this event as a way of taking stock and seeing where we are and what has to be done," Merkel told reporters, adding that there were still problems to be addressed and that Turkey was a willing and constructive partner.

"Assimilation is not on our agenda, this is about integration," Merkel added, stressing that learning the German language was integral for the employment opportunities of young Turks living in Europe's largest country.

Erdogan, meanwhile, said the integration of some 2 million Turkish people living in Germany was "very important," and that both countries needed to take a closer look at what could be done to advance the process. 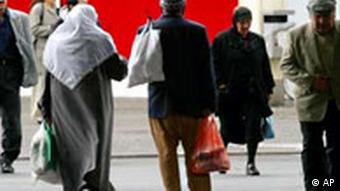 The theme of Muslim integration has been a hot topic lately

The Turkish premier went on to welcome recent comments by German President Christian Wulff, who said on the 20th anniversary of German reunification on October 3 that Islam was "now a part of Germany."

The integration debate in Germany has flared in recent months after a central banker said Germany was becoming "more stupid," claiming immigrants from Muslim nations are poorly educated and unproductive.

Erdogan told a joint news conference with Merkel that Turkey's bid to enter the EU must not be allowed to slow, addressing concerns that some EU members are stalling entry of a Muslim country to the club.

The two leaders met over breakfast in Berlin after the previous night's Euro 2012 football qualifying match in the city, where Germany beat Turkey 3-0.

'No clear prospect' for EU membership

Prior to his visit, Erdogan accused the EU of failing to provide his country with a clear prospect of joining the bloc. 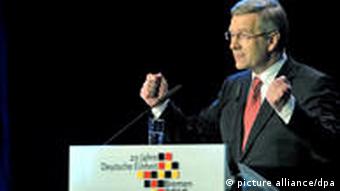 Wulff was praised for his comments about Islam

The EU Commission is finalizing its annual report on how Turkey is progressing on EU requirements. An impasse over Cyprus, an EU member that Turkey has refused to recognize, will be seen as the main outstanding problem.

Meanwhile, Horst Seehofer, the head of the conservative Christian Social Union party and state premier of Bavaria, has called for a restriction of immigration to Germany from certain cultures.

Seehofer told Focus magazine that migrants from Turkey and Arab countries had a harder time integrating, and that those immigrants who refused to integrate must be dealt with more firmly.

EU foreign affairs chief Catherine Ashton held talks in Istanbul on the country's stalled membership bid and Turkey's growing regional diplomatic role. The visit is seen as a first step in a new cooperation with Turkey. (14.07.2010)