Controversial central banker quits and opens new can of worms | Germany| News and in-depth reporting from Berlin and beyond | DW | 10.09.2010

Thilo Sarrazin, a member of Germany's central bank, has stepped down. He now presents a problem for his political party, the Social Democrats, after claiming in a new book that Muslims are undermining German society. 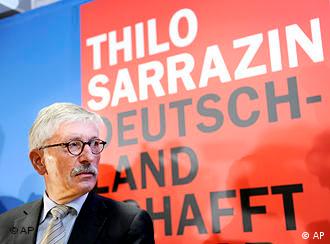 Sarrazin got a standing ovation at a Potsdam reading

Controversial German central bank board member, Thilo Sarrazin, has resigned from his post in the wake of mounting pressure over comments he made which were interpreted by many as being xenophobic.

Sarrazin asked German President Christian Wulff to relieve him of his duties, according to a statement by the Bundesbank on Thursday evening.

His resignation from the bank has saved the president from having to make the difficult decision of whether to remove him from the post. Legal opinion is divided over whether a dismissal would stand up in court.

The scandal is far from over

The next chapter in the Sarrazin saga, however, is just beginning with demands from his political party, the center-left Social Democrats, to throw him out of the organization.

Sarrazin has been a card-carrying SPD member for decades and once served as finance minister for the city-state of Berlin under an SPD government.

The SPD has begun proceedings to expel him, but Sarrazin has said he aims "to go to his grave" as a member of the party.

Polls show that the SPD has been hurt by the debate over whether to eject him.

SPD party leaders have been inundated with messages of support for the banker.

At a reading of his new book on Thursday in Potsdam, many of the 700-strong audience gave him a standing ovation, reports said. 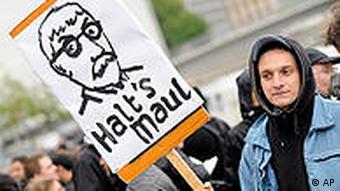 Sarrazin sparked the controversy several months ago with his theories about race and the impact of immigration, particularly by Muslims, in Germany.

A series of comments published to coincide with the publication of his book "Deutschland schafft sich ab," ("Germany is doing away with itself") had raised the debate to a new level in the past two weeks.

In his book, Sarrazin claims that Muslims are undermining German society by failing to integrate, having too many children and underachieving in school.

Sarrazin also caused concern with comments that all Jews shared a gene that made them different from other people.

Earlier in the year, Sarrazin also courted controversy by claiming that immigration from Muslim countries was making Germany "more stupid."

The constitution should make it clear that German is the country's official language, a leading conservative politician said on Friday. His call comes as social integration is at the center of public debate in Germany. (10.09.2010)

Central bank executive Thilo Sarrazin launched his new book "Germany is doing away with itself" on Monday. Deutsche Welle has covered the controversial banker and received many responses from readers. (03.09.2010)