German president′s call for religious tolerance meets with praise and criticism | Germany | News and in-depth reporting from Berlin and beyond | DW | 04.10.2010

President Christian Wulff marked the 20th anniversary of German reunification by calling on Germans to be more open to Muslims. The address drew a mixed response from the country's religious groups and politicians. 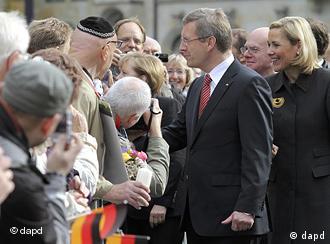 Wulff used his speech to call for openness from Germans

German President Christian Wulff's speech to commemorate the 20th anniversary of German reunification, in which he called for the integration of Muslims in Germany, has met with praise and light criticism among religious groups and politicians in the country.

The leader of Germany's Central Committee of Muslims, Aiman Mazyek, told Monday's edition of the Berliner Zeitung that the address was a "distinct signal" of openness.

"The inner unity of Germany is not achieved only by bringing together East and West, but rather by allowing the different cultures and religions to grow together," he said.

The head of Germany's Left party, Gregor Gysi, echoed those sentiments on Monday, lending praise to Wulff's assertion that "it's not only immigrants who are responsible for integrating but also Germany."

"No other German president has ever posed this question on the occasion of the anniversary of German reunification the way President Wulff did in his speech last night," Gysi said.

In the address, Wulff urged Germans to be more open and tolerant towards each other. "The country must accept difference, it should even want it," he said. "The future belongs to nations that are open to cultural diversity, for new ideas and coming to terms with strangers," he said.

German Chancellor Angela Merkel, while endorsing Wulff's words, also expressed reservations on Monday with regard to the position of Islam in German culture. 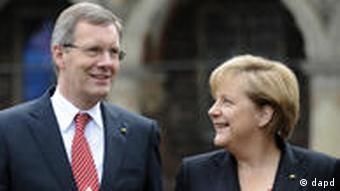 All Germans must 'conform to German values,' Merkel said

Merkel demanded that Muslims living in Germany also conform to "fundamental German values," saying there was no leeway on the issue.

Similar reservations to Wulff's call for religious unity were expressed by Norbert Geis, a member of parliament belonging to the Christian Social Union, the Bavaria-based sister party of Chancellor Merkel's Christian Democratic Union.

Geis told German pubic radio that Wulff's statement that "Islam also belongs in Germany" should not be construed as meaning Islam and Christianity have an equal footing in the country.

"Islam does not belong to Germany in the same way that Judaism and Christianity does. It would be false and far from reality to make such a comparison," he added on Deutschlandfunk.

Wulff's speech came after a simmering debate on the role of immigrants fueled by Thilo Sarrazin, an outspoken former board member of Germany's central bank. In a controversial book, Sarrazin accused Muslim immigrants of sponging off the welfare state, refusing to integrate and undermining the nation's development.

Without mentioning Sarrazin, Wulff said: "We cannot allow the perpetration of myths, the hardening of prejudices and exclusion."

"Twenty years after reunification, we stand before the huge task of finding new solidarity in a Germany that is part of a swiftly changing world," the president said, urging all faiths and ethnicities to live together without "daydreaming or fear."

On October 3, 1990, Germany was officially reunified after four decades of being divided and at the heart of the Cold War. The day has been a national holiday ever since.

German President Christian Wulff has vowed to focus on the hot button issue of integration of immigrants. And the president made good on that pledge in his speech marking German Unity Day, DW's Volker Wagener says. (03.10.2010)

Germany kicks off celebrations to mark 20 years since reunification

Germany has begun a weekend of celebrations to mark the 20th anniversary of reunification. Politicians have been urging Germans to celebrate the accomplishments achieved in the united country over the past two decades. (02.10.2010)

A grand celebration of unity

On the night of October 3, 1990 thousands of people celebrated German reunification in Berlin. That night was the culmination of months of difficult negotiations, months when it wasn't at all clear how it all would end. (01.10.2010)