Germany and its 200 million chocolate bunnies | Business| Economy and finance news from a German perspective | DW | 25.03.2016

Germany and its 200 million chocolate bunnies

Easter is almost as sweet as Christmas for German confectioners. And for chocolatiers, it's even sweeter. Chocolate bunnies remain in high demand in many parts of the world, a German industry group confirms. 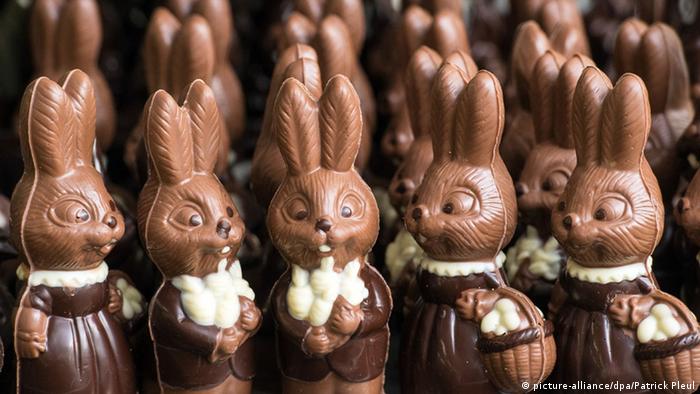 The Association of the German Confectionery Industry estimates that around 200 million of its chocolate Easter bunnies will sell worldwide in 2016 - and this is a down year.

Though they may now come in all sorts of shapes and outfits, German consumers prefer the classic bunnies, perhaps for their nostalgic value.

But more than 40 percent of the bunnies end up outside of Germany. Most find their way to other European countries. Some make it all the way to the US and Australia.

Not a bumper year

The production of sweets has been down though this year for a number of reasons.

One of them is surprising - the chairman of the Association of the German Confectionery Industry Hans Strohmaier points to warmer weather.

"Business this season was hardly restrained by wavering consumer sentiment, but instead by climate conditions." Cooler temperatures mean sweeter tooths.

Regardless, the few days before the holiday count most, according to Michael Griess, a sweets expert with the market research institute Nielsen. Demand during the record-setting week before Easter "spurs sales of all other sweets."

Nielsen reports that last year Germans spent an average of 5.65 euros ($6.3) per person for goods related to the holiday. That adds up to about 453 million euros ($505.5 million) in total.

5 things you probably didn't know eggs can do

Beyond ruling the breakfast table and the Easter basket, discover these five unexpected functions of eggs. You can also get passionately involved in a very German debate: How do you eat a soft-boiled egg? (24.03.2016)

How to celebrate Easter in Germany

Watch out for sugar-coated lambs, fire and lots and lots of chocolate. Here's what to expect during the four-day Easter holiday in Germany. (24.03.2016)

Germany's Federal Court of Justice has ended a long-standing legal battle, ruling that the Swiss candy giant's chocolate teddy bears are no copy of Haribo's gummy bears and no violation of Haribo's logo. (23.09.2015)