Thousands of Germans are traveling to Mallorca as part of a pilot project before Spain officially reopens its borders on June 21. What kind of vacation is possible during the coronavirus pandemic? 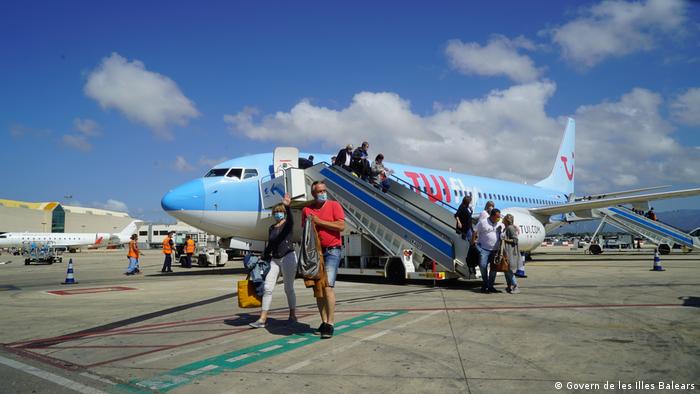 Dietmar Bumbullis had not expected this sort of welcome. The entire hotel staff stood guard and applauded as they climbed the few steps from the bus to the hotel. The couple from Olfen, in western Germany's Münsterland carried their own suitcases. Dozens of camera teams, reporters and photographers followed their arrival. "It almost makes you feel a bit like a movie star," the holidaymakers said, sitting on the sun terrace of the Hotel Riu Concordia on the Playa de Palma a little later with a cool beer.

One hundred and sixty-five holidaymakers arrived on Mallorca Monday morning as part of a pilot project run by the government of the Balearic Islands, the regional hotel association and the tour operator TUI — despite the fact that Spain is actually still on high alert because of the coronavirus pandemic, which normally would mean that travelers from abroad have to spend two weeks in quarantine. This rule does not apply to these German holidaymakers. It is something like a trial run for the late start of the tourist season on Mallorca. 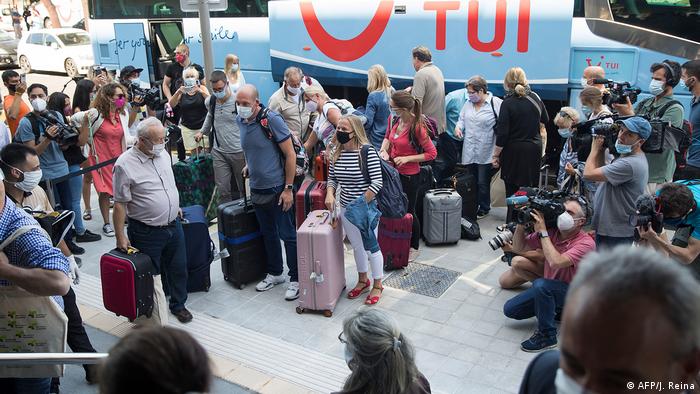 Media hype in front of the Hotel Riu Concordia

The hygiene rules in the five hotels taking part in the one-week pilot project are accordingly strict. Arrows glued to the floor show the way. Those who do not adhere to the rules are politely but firmly reprimanded. Every few meters there are dispensers with hand disinfectant. At the entrance to the dining room, meticulous attention is paid to making sure that everyone uses it — and that face masks are worn properly. To the left and right of Andrea and Dietmar Bumbullis, there is plenty of space, because the distance between the tables has been increased on the terrace.

"Germany is also subject to hygiene rules," the Bumbullises said. "It makes no difference — except here the sun shines." At the airport they had to line up in front of a thermal imaging camera to prove that they did not have an elevated temperature. They had to provide their personal information. And during their holidays, they receive a daily phone call from the Balearic health authority to check that they are doing OK. If there are signs of a coronavirus infection, the person is tested and isolated if the result is positive. 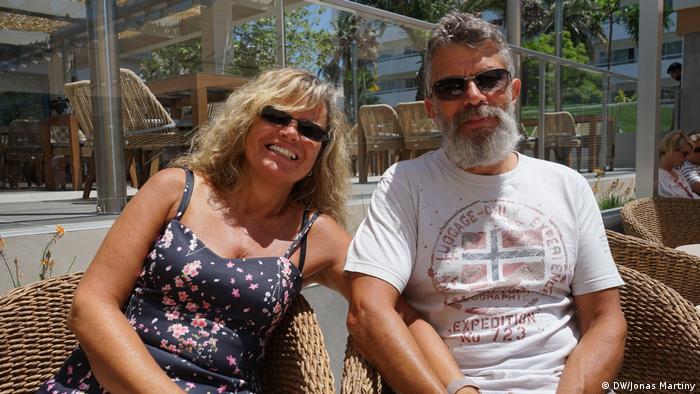 None of this has deterred the Bumbullises. They had already taken holiday leave, and then, when the offer came up, they booked at short notice — it helped that it was really cheap. Dietmar called it "a real scoop": "A week's holiday somewhere in Germany would certainly have cost more."

The project will initially be a financial drain on Mallorca's hotel sector. Joan Company, the director of the Alcudia Garden Hotel in the north of the island, freely acknowledged this. "Economically, this test run will be a disaster," he said. "We're going to lose money." Opening the whole hotel for 40 guests is not worth it. In addition, he has also had to increase staff considerably to enforce the strict hygiene rules. "What we want to do is to get started again," he said, "so the world can see that it's safe to spend your holidays here on Mallorca." The pilot project is primarily a marketing campaign. No one is trying to hide that fact. "This way, we are establishing ourselves internationally as a safe destination," said Francina Armengol, the president of the regional government of the Balearic Islands.

Palma Mayor Jose Hila said: "We want to show Germany that we are ready."

On Monday, dozens of reporters watched a press event to welcome the travelers, which was also attended by the regional tourism minister, the president of the island's council, and TUI executive board member Sebastian Ebel. They all praised each other for the successful cooperation and said they were optimistic.

A few streets away, the mood was not quite as rosy. "Playa de Palma is not at all prepared for the start of the season," said Tomeu Mestres. He was one of the first owners in the area to reopen his tapas restaurant a few days ago after a mandatory break lasting for weeks — in the hope of being able to welcome German holidaymakers. On June 21, Spain's state of alert will be lifted and the country will reopen its borders to international tourism, although most of the hygiene rules will still apply. But, at Playa de Palma, weeds are still growing out of the cracks in the asphalt, Mestres said: "The city council hasn't even had the palm trees trimmed yet." The restaurants in which generations of German holidaymakers have celebrated are still barricaded. The area looks like the deepest winter, when nothing at all happens here. 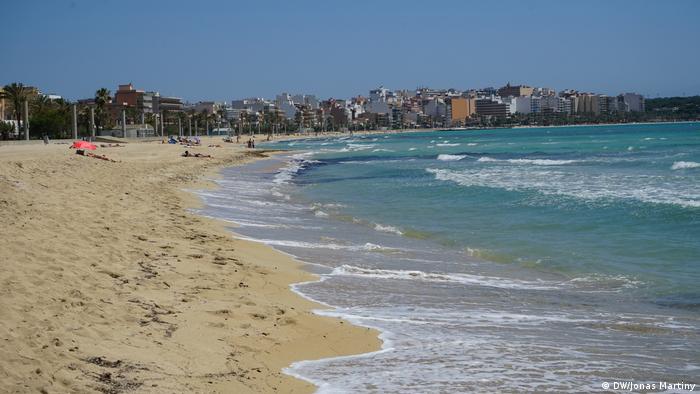 For now, there is plenty of space on the 6-kilometer (3.7-mile) Playa de Palma beach

The Bumbullises don't mind: They did not come to get wild. "Under normal circumstances, we would never have booked a holiday at a notorious party location," they said. Normally they are more likely to be drawn to quieter areas of the island. "We were curious to see Mallorca without tourists," they said. You can see exactly how that looks on the beach just around the corner. Here, where thousands of holidaymakers throng in a typical June, there is absolute emptiness. The few sunbathers spread out on the kilometer-long sandy beach are guaranteed not to get too close to each other — even without having to observe any social distancing rules.

COVID-19: Summer vacation away from the mainstream

Holidays are his profession: Publisher Michael Müller is one of the co-creators of a series of individual travel guides in Germany. We asked him what the prospects for summer holidays in 2020 might be. (25.05.2020)

On June 15, the German government's worldwide travel warning for most European countries will be lifted. How are tour operators and travel agencies preparing for the new start? How willing are Germans to travel? (12.06.2020)

The COVID-19 epidemic poses a threat to the everyday life of people worldwide. Travelers are particularly affected, as are people working in tourism. Here are the latest developments. (17.06.2020)

The 10 most popular holiday destinations for Germans

Mediterranean or the Alps? Germany is lifting its European travel warning from June 15, Germans will be able to go abroad again. These are their favorite destinations, according to the German Travel Association in 2019. (03.06.2020)

From never-ending lines at airports to crowded trains, drought and wildfires in vacation areas, travel in the summer of 2022 was fraught with challenges. Here's a recap of the travel season.