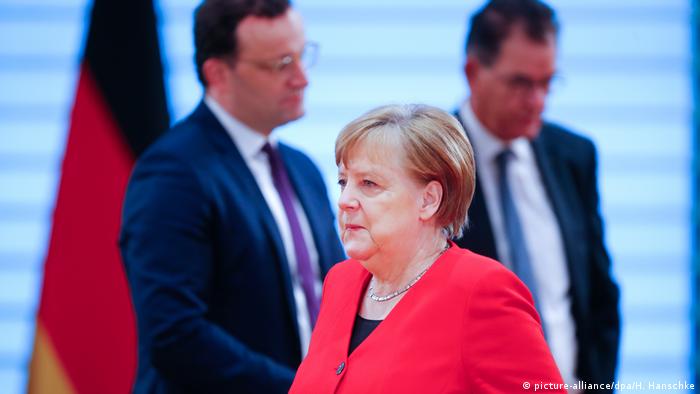 After the initial shock of the COVID-19 pandemic and brief phase of political unity that followed, the opposition Free Democratic Party (FDP) and Alternative for Germany (AfD) have shifted tack of late and begun to criticize the government's response. Many media outlets have followed suit.

These developments might lead one to think Germany is polarized, yet most people in the country don't appear to be feeling the partisan animosity. The latest Deutschlandtrend survey by Infratest dimap shows that two-thirds of respondents give the government positive marks for its handling of the coronavirus crisis. Those numbers show little deviation from last month.

High approval ratings for Merkel and the CDU

Among the parties, Merkel's conservative Christian Democratic Union (CDU) and its Bavarian sister party, the Christian Social Union (CSU), garnered the highest approval, up five percentage points (to 39%) from last month. The last time the CDU/CSU enjoyed such levels of approval was August 2017. Their junior coalition partners, the center-left Social Democrats (SPD), remain stuck at 16%.

Opposition parties, however, continue to struggle. The Green party's 18% approval rating (-4) was its lowest since October 2018, and the far-right AfD's 9% approval rating (-1) put it in single digits for the first time since August 2017. Like last month, the business-friendly FDP would be hard-pressed to win seats in parliament at just 5% support. Only the Left Party saw a slight bump in approval among opposition parties, up this month to 8% (+1).

Currently, the question of who will become the new leader of the CDU and who will succeed Merkel as the conservative candidate for chancellor has been put on hold. Before the coronavirus pandemic began, three men had thrown their hats in the ring: Norbert Röttgen, Friedrich Merz and Armin Laschet. Now a fourth, one who never asked for the job, is getting a close look: Markus Söder, the head of the CSU and Bavaria's state premier. Söder has been front and center during the crisis, garnering significant media attention. Half of all respondents think he would make a good candidate for chancellor.

It is unclear when the conservatives' leadership future will be determined, however, as Germany currently has a ban on large gatherings, making it impossible to stage in-person party conventions.

This month's poll took place on May 4 and 5, before the federal government announced the first loosening of lockdown rules. Merkel said she saw "very good developments" regarding the pandemic and citizens seem to agree with that assessment. Over the past month, fear of infection as well as concerns about strains on Germany's health care infrastructure have greatly dissipated. Fear that oneself or one's family might get infected dropped by half, and fears of medical shortages fell from 37% to 21% among respondents.

Read more: Will the coronavirus crisis finally spell the end of cash payments in Germany?

The one thing that scares Germans is the economy. The federal government has projected a deep recession and economic research institutes are reporting dismal numbers. It is unsurprising, then, that despite two-thirds of Germans having a positive outlook on the economy in March — before the lockdown — only one-third share that optimism today — the lowest number registered in a Deutschlandtrend survey since the 2008/2009 financial crisis.

Interestingly, fear of losing one's own job remains relatively low. Emergency aid programs, short-time work rules and other measures seem to have allayed fears in that regard. In fact, the number of individuals who said they had serious concerns about job security dropped from 18% in April to 13% in May.

Beyond the economic impact of the crisis, social aspects of the lockdown have also taken on a sense of urgency, with more attention focused on the well-being of children. About two-thirds of Germans (63%) say they are concerned that childhood development could be negatively impacted by long-term closings at daycare centers and schools.

Pollsters also asked respondents how concerned they were about losing personal freedoms as a result of the lockdown. Roughly four-in-10 respondents said it was a concern, down slightly from last month. Here, too, those most concerned tended to be AfD and FDP supporters. Whether the relaxing of lockdown restrictions allay those concerns may be a question for the June Deutschlandtrend survey.