Currently, Germany allots more office space per worker than any other European country. But will new business trends put a squeeze on professional elbow room? 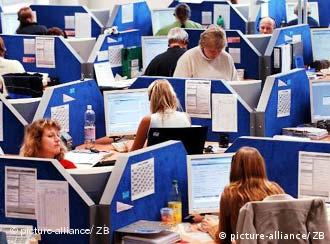 Most Germans enjoy a fair amount of office space, unlike these workers

A recent study by global real estate brokers Cushman & Wakefield shows German businesses allot workers more than twice as much office space -- 30 square meters per person -- than the European average of 14 square meters. That's the most of any European country, with the nearest competitors -- Netherlands, Scandinavia and Switzerland -- renting 20 meters of space per worker. Bulgaria trailed the pack with 10 square meters.

The same study showed that, overall, lawyers had the biggest offices in Europe, with an average of 17 square meters per person, followed by banks and IT companies. Not surprisingly perhaps, call-center workers had the tightest fit, with a mere eight square meters.

Gabriele Stegers, a spokeswoman for international real estate consulting firm Colliers Trombello Kölbel in Düsseldorf says it is true that many German office workers have spaces that may seem like pashas' dens compared with conditions elsewhere. 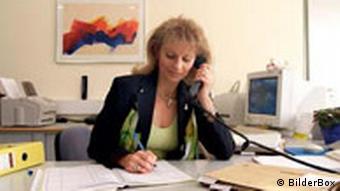 She's got her own office

The cubicle -- so common in the United States -- has only made limited inroads into German business. And actual offices -- with doors that close and windows that let in natural air and light -- are common perks for even mid-level managers.

"It's true, that Germans get more leg room," said Stegers. "Everybody here wants to make the office like their own little house; they put pictures on the desk and calendars on the walls."

Some of that has to do with technical issues. For example, raised floors that allow cables to be run into a giant open-space office first became standard here in the 1980s. Strict workplace regulations in Germany also require workers to have access to natural light.

"Germany has a more hierarchical working style. In Britain, and the US, there is less hierarchy, and more flexible types of work models, said Stegers." Companies that rely on teamwork or groups that form anew for each project require more open-plan office space, and more transparent communication."

But as the nature of work changes and trends like telecommuting and "hot-desking," workers bringing their own belongings to whatever desk happens to be unoccupied that day, continue to gain ground, this is likely to change.

Indeed, Wilhelm Bauer, a researcher at the Office Innovation Center at Germany's Fraunhofer research institute, pointed back in 2004 to prognoses that between 40 and 60 percent of all employees will be working as "e-lancers" by the year 2020. 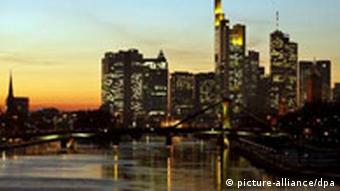 Frankfurt's cheap when it comes to office space

In a speech to the office design fair Orgatec, he noted that employees actually use their own office just 30 to 50 percent of the time. "For this reason we are stepping in the direction of the non-territorial office."

Cushman & Wakefield's study showed, too, that the number of open-plan offices, also known as "cubicle farms" -- is growing. Some 40 percent of those questioned said they planned to expand their open-plan offices in the next 12 months, and 20 percent wanted to increase workplace flexibility through hot-desking or by introducing external work sites.

But according to Stegers, big changes may be more theoretical than practical.

"I think it is very complicated for big companies, like Siemens or Daimler Chrysler," he said. "They have a huge administration, and they only have a small portion of people who can use these flexible office spaces."

But there is another key factor to why German office workers have so much breathing room: companies can afford to offer it. Commercial real estate in Germany is cheaper than most anywhere else in western Europe. 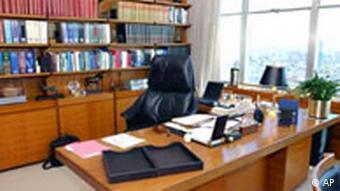 While most Germans don't have offices like former UN chief Kofi Annan's, they've got more room than most

A study by CB Richard Ellis shows Germany's most expensive commercial real estate market, Frankfurt, ranks just 29th worldwide in terms of cost. That puts it far below cities like London, which topped the list, Moscow (sixth place), Paris (eighth) and even behind Bombay, which offers the seventh most expensive office space in the world.

This puts Germany in a good position when it comes to competing for office space in the international marketplace. Rent is a huge fixed-cost factor in a balance sheet, said Robert Menke, head of Cushman & Wakefield's office space division.

Menke, too, sees that companies will increasingly try to optimize the office environment by going for open floor plans, and trying to improve communication flow.

Meanwhile, until some sea changes take effect, German offices continue to do what works best for a given situation.

My laptop, my office

At Cologne-based software and consulting company ifb AG, some of the employees spend almost all of their time at a client site, and are only in the home office a few days a year. They have a rolling cabinet with a few drawers that contain their personal effects, and a laptop and cell phone provided by the company.

"Many of our employees are used to sitting at desks that are not their own," said ifb spokesman Andreas Grotz. "The notebook becomes the home office, in effect."

But doesn't having a fixed work space -- the bigger the better -- make people feel more attached to their company?

No, Grotz said. There are more important factors: Work appreciation, getting space to learn new things and being treated honestly.

Life got a little tougher for the elderly in Germany this week as the government decided on new measures designed to iron out of some of the wrinkles in German society. (30.11.2006)

The German government has abandoned plans to make it easier for highly skilled foreign workers to immigrate to Germany. (25.10.2006)

Three decades ago, German employees saw their influence at work greatly increased. A "co-determination" law went into effect putting workers representatives in the boardroom. Some ask if it is still right for the times. (30.08.2006)