German women lose to US to open SheBelieves Cup campaign

Germany's women have gotten off to a losing start at the SheBelieves Cup in the United States, losing 1-0 to the hosts. The Germans haven't beaten the Americans in more than 13 years. 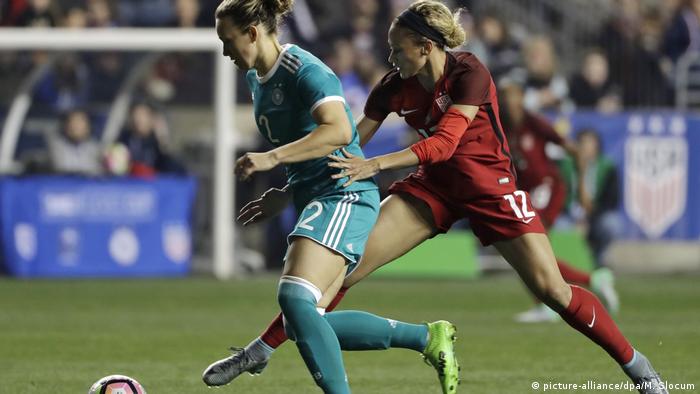 The Americans came out on top in Wednesday's duel between the world's two top women's national teams, as Lynn Williams scored in the 56th minute to give the United States the 1-0 victory in the match played in Chester, Pennsylvania.

"I happened to be there at the right time," the 23-year-old Williams said.

In addition to being the No.1 and No. 2 teams in FIFA's women's rankings, the United States and Germany have won the last two major women's trophies; the World Cup and the Olympic gold medal in Rio.

This was the first defeat for in the six matches since German head coach Steffi Jones took over from Silvia Neid.

"In view of the travel stress I am proud of the performance my team showed, despite the defeat," Jones said afterwards. "We closed down well, but we still lacked precision."

Wednesday's match marked the 150th appearance for the national team for Anja Mittag.

"I am proud to have played my 150th match for the national team, the 31-year-old Wolfsburg striker said. "It's too bad that we narrowly lost. There was more in it (for us)."

The defeat means that Germany's long dry spell against the United States continues. Germany's last victory over the Americans was their 3-0 win in the semifinals of the 2003 World Cup, which was hosted by the US.

Germany's next match is against France on Saturday, before they go on to face England on Tuesday.