German Welfare State at a Turning Point | News and current affairs from Germany and around the world | DW | 15.08.2004

Germany's social insurance system is one of the most generous in the world and boasts both a long history and extended expansion course. But its long upward arc is changing direction. 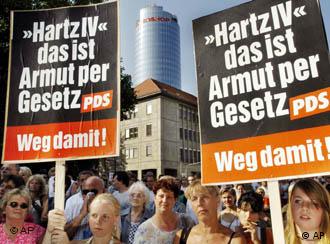 Germany's social welfare system, much loved by those on the left, was in fact put into place by a 19th century conservative Prussian with strong authoritarian tendencies, Chancellor Otto von Bismarck. In the 1880s, he established obligatory health, accident and old-age and disability insurance programs, whose principles have guided the development of social policy development to this day. 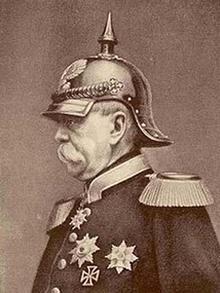 But Bismarck's (photo) motives were not altruistic, and this landed gentleman felt no particular affinity to the working classes. In fact, he set in motion Germany's welfare state as a way to keep the poor who manned the factories in the rapidly industrializing country from defecting to the hated opposition, the Social Democrats.

While he did not manage to fatally wound his political enemies with the strategy, he did succeed in laying the base for a social welfare system that grew and expanded until, with some exceptions, provided citizens with cradle-to-grave security.

After its inception and until World War I, the social insurance was limited to workers and didn't cover white-collar employees. That changed during the 1920s and the Weimar Republic, when German social policy embarked on an expansion course. Important benefits were added during this time, such as unemployment insurance in 1927.

That growth continued during the Nazi era, as health care and old age provisions were improved upon.

"When a government is preparing its citizens for a war, it's important to give them something," Karl Hinrichs, professor at the University of Bremen's Center for Social Policy, told DW-WORLD. "This was the carrot part of the carrot and stick approach." 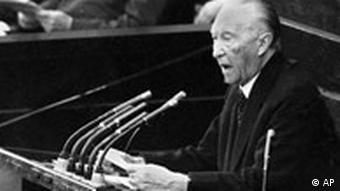 After the war, the next big change came in 1957, when then-Chancellor Konrad Adenauer (photo), another conservative, put through his Pension Reform Law, that was designed with the ambitious goal of sharing the wealth of Germany's "economic miracle" with the retirees who had contributed to it during their working lives.

The new system abandoned the earlier Bismarck system of residual benefits designed only to keep the elderly out of severe poverty. It replaced them with pensions linked to past wages and increases in payout amounts coupled with rising wage levels. 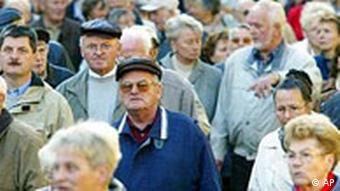 The scheme was financed through shared employer and employee contributions calculated as a percentage of gross wages, the "pay-as-you-go" model. It paid for current pension benefits, which averaged about 70 percent of previous wages, out of what current workers paid in, a plan which worked very well during the boom years of the 1950s and 1960s.

"The reform put an end to the old maxim, being old is being poor," said Hinrichs.

The system remained in good health until the early 1970s , even after almost twenty years of rising benefits. This was reflected in the fact that in 1970, total social contributions, were around 26 percent of gross wages. Twenty years later, they were approaching 40 percent.

The good economic times were not to last. The oil crisis of the early seventies effectively ended Germany's "miracle" and the first signs appeared hinting that the social welfare system might run into future problems. Demographers began looking at future population structures in the country and coming to the conclusion that the population was beginning age significantly. The graying of the society then looked poised to accelerate rapidly in the 21st century.

The 1980s brought further bad news, as rising unemployment, slowing growth and rising contribution rates began to put more pressure on the system. In 1990, when the two German states were reunited, East Germans began to participate fully in the West German system. 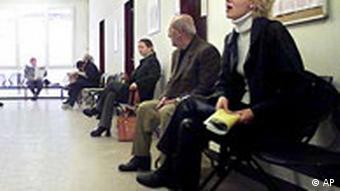 Unemployed waiting at a job center in the western city of Gelsenkirchen.

Expenditures shot up, and the massive loss of jobs in the east meant workers were paying less into the system, but demanding more of it. The system's financing model increasingly looked unsustainable.

"But the government had been able to make it all work until then, and kind of fallen asleep at the wheel," said Hinrichs. "Other countries with similar systems started tackling these kinds of problems earlier than Germany did."

Slowly, many analysts say much too slowly, officials began to realized the system created in the 19th century was no longer functioning in the 21st. Advances in health care mean that today people are drawing of pensions for twenty years or more. A century ago, drawing a pension for five years was considered a long time. Payroll taxes have had to steadily increase to finance the system, making German labor more expensive. That, in turn, causes firms to leave Germany for cheaper shores and drives up unemployment, which, in a vicious circle, drains the system further.

But attempts by Chancellor Gerhard Schröder's coalition government to reform the system to ensure its long-term survival and boost economic growth have met with widespread anger from the populace. 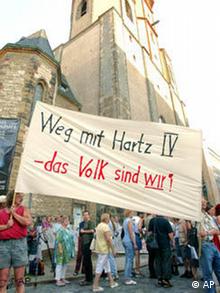 Demonstration in Leipzig against welfare and labor market reforms.

Recent rallies in eastern Germany protesting the so-called Hartz IV law which would trim benefits for many, particularly the long-term unemployed, have brought thousands of people to the streets. Several members of Schröder's own Social Democrats have threatened to split from the party on the issue. Apparently taken aback by the intensity of the protests, Schröder has been forced to soften some of the reforms' rougher edges.

Still, the chancellor insists that wide-ranging and sometimes painful reforms are the only way that the country's welfare state will survive in any form in today's globalized world. Most analysts agree.

"It's difficult to put these reforms through in Germany, although they have to go further," said Hinrichs. "People are accustomed to their benefits and they're not ready yet to give them up."

Public protests against the government’s social and economic reforms reached a new peak Monday night, as tens of thousands of demonstrators took to the streets in over 30 cities mainly in former communist East Germany. (Aug. 10, 2004)