Facebook's plan to debunk hoax stories with the help of fact checking websites is an approach a German project has been taking since February. DW talked to its founder about the allure of online rumors. 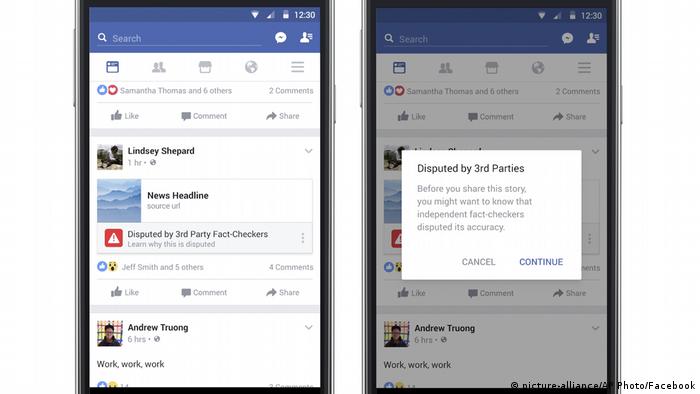 The fight against so-called fake news has entered the next round: In an attempt to identify fictitious stories on its platform, Facebook announced a partnership on December 15th with fact checking sites including ABC News, PolitiFact, Snopes and The Associated Press.

Facebook has been criticized for not doing more against the spread of fabricated news stories. Almost two in three US adults say such misinformation causes a great deal of confusion, according to a  Pew Research Center poll.

But where Facebook and others are just starting to take measures, German project Hoaxmap has been fighting fake news since February. Built by a two-person team, the interactive map displays instances of rumors and fake news about refugees or migrants and links them to news reports that debunk them. Since the portal launched, Karolin Schwarz and her co-founder have compiled 435 cases, ranging from harassment and arson to involuntary manslaughter.

DW talked to Schwarz, who started Hoaxmap after being confronted with rumors working in a refugee shelter in Leipzig, Germany.

DW: What are you hoping to accomplish with Hoaxmap?

Karolin Schwarz: At the shelter, I heard many rumors about refugees spread by alt-right and neo-Nazi movements being refuted every day. So I was like: "We need to show that is a phenomenon we didn't see before." Rumors and fake news about refugees are being used on social media to poison the political discourse. We want to raise awareness about the importance of fact checking, which was under the radar in Germany until Trump was elected. When we launched, there was a lot of buzz - people contacted us from Canada, Spain, Denmark, even Japan, saying "This is going on in our countries as well." 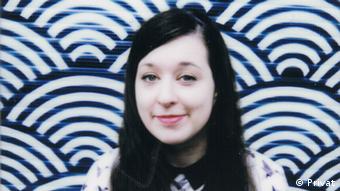 Are there exceptions to the rule that rumors and 'fake news' spread more virulently than real news?

One of the rumors we debunked was about refugees robbing a supermarket. The owner reacted really fast by putting up this sign on his front door saying that this isn't true and posting about it on social media. This post was shared way more than the original fake news post. But cases like this are few and far between.

Some people seem to be more susceptible to hoax stories than others. A recent study states that while a majority of Germans defends democratic values and the government's pro-refugee policies, radicalization is on the rise among a growing minority.

That's true, and once these people are radicalized, it's hard to reach them with facts. Many of them have created an alternative reality in their lives where the classic media houses don't matter anymore. They get their news from alt-right or neo-Nazi websites, which don't depend on Facebook that much for sharing their "news." If a user is banned from Facebook, for example, he or she can go to sites like the Russian network VK.com, which many German neo-Nazis use to spread their hate. Knowing we can't reach alt-right folks who believe in this stuff anyway, we primarily reach out to those who aren't sure if something is true. But we try not to talk to them like they're dumb. They might lack social media competencies. I believe Germany's education system doesn't adequately prepare people to use the internet to consume news.

Do you see any drawbacks to the kind of fact checking Facebook and others are doing?

[Media outlets] are rumored to be working with the government against alt-right parties. In that sense, fact checking could be seen as a conspiracy between classic media and mainstream political parties, which manifests itself in the "Lügenpresse" [lying press] narrative going around in Germany.

A prominent case on Hoaxmap is Jürgen Kasek, the chairman of Germany’s green party in Saxony. How did he become the victim of false information?

In July, Legida [the Leipzig chapter of the German right-wing protest movement PEGIDA], accused Kasek on Facebook of having orchestrated an attack on one of their security guards. People showed up at Kasek's office, insulted and threatened him. He also received more than 200 hate comments on Facebook, and people shared his private address and the addresses of his family. After Kasek sued Legida, it took down the post and agreed to refrain from repeating the accusations. It's really one of the more frightening cases that shows the potential of a rumor created in minutes that spread like wildfire and really hurt someone and his family.

Can you describe a few other examples?

A German-Russian girl in Berlin reported to have been raped by refugees. In the following days, we saw demonstrations by German-Russian people and even diplomatic tension between the two countries. It turned out the girl made up the story to hide what really happened. Another example is a rumor about a woman in Bavaria that spread on social media. She was supposed to get extensions and braids, for which the local government allegedly paid 700 euros, for religious reasons. It was debunked because the local government made a public statement. 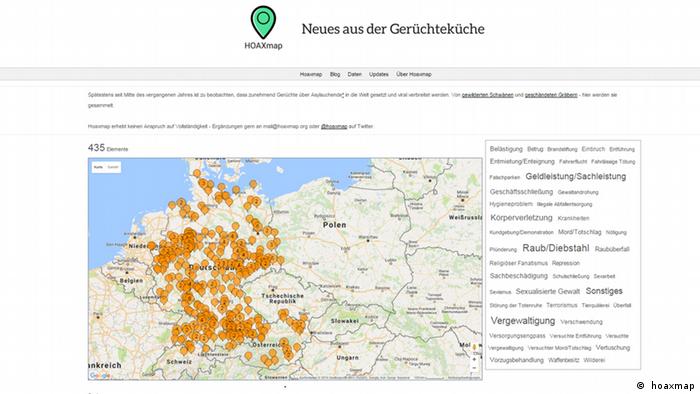 Have you detected any patterns among the cases?

We see a lot of rumors about excessive social welfare, especially in Bavaria. And many photos are taken out of context, for example a hip hop artist using a gun for his music video, which people posted and said: "Look, migrants are running around with weapons." And then we also have a lot of people reporting false stories to the police to hide what really happened.

Have you noticed any differences and similarities between Germany and the US when it comes to rumors and 'fake news?'

Both countries have alt-right websites, Facebook pages and private people spreading fake news. But in Germany none of them exist just to make money as we are seeing in the US. A substantial part of the population doesn't seem to care about the truth in both countries. Similarly, there are politicians who spread rumors without bothering to check if they're true, such as some AFD [Alternative for Germany] politicians here. Although there's less of that in Germany so far, I'm scared we'll see a lot more of this in Germany with Breitbart and other fake or alt-right websites coming to Europe.

What can people do when they are confronted with a rumor?

People should question stories they have heard from a friend of a friend. Just asking for details like the source could help debunk the rumor or story. They should also question the purpose and legitimacy of suspicious documents, such as fake letters sent out by city governments telling people to make space for refugees in their homes. And be weary of photos taken out of context like the one showing refugees in Germany going through clothes lying on the ground. This is supposed to create the impression that they're treating what we're giving them without respect.

Karolin Schwarz is a community manager, blogger and consultant based in Berlin. She holds a degree in ethnology and African studies and currently works as a social media editor. Earlier this year, she was nominated for the Grimme Online Award for initiating Hoaxmap.org.

Facebook has announced it will offer new ways to allow users to flag up concerns about fake news. Users will be able to report false stories more quickly and stories deemed untrue will not be promoted. (15.12.2016)

The map shows locations and provides links to sources that refute stories about crimes reportedly involving refugees. Creators say the response has been overwhelmingly positive. (11.02.2016)