Eleven men have gone on trial in the southern city of Freiburg in the rape of an 18-year-old outside a nightclub. Between now and December, two forensic experts and 50 witnesses are set to testify. 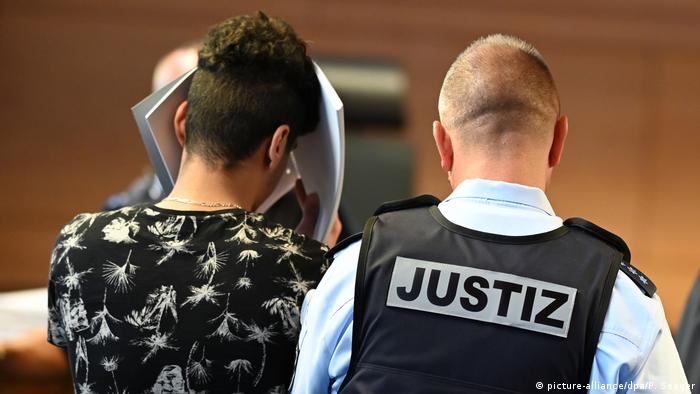 A juvenile court in Freiburg, Germany, on Wednesday began what is expected to be a four-month hearing into what happened last October outside a nightclub in the city's northern industrial area.

Due to stand trial on charges of rape and failure to provide assistance were 11 men of various backgrounds, according to judicial officials. They are currently aged between 19 and 30 and include a 22-year-old main suspect described as a "multiple offender."

Prosecutors accused him of raping the 18-year-old woman in shrubs outside Freiburg's Hans-Bunte-Areal nightclub and, over the course of several hours, encouraging other men to emulate him. The case shocked Germany and led to marches in support of the victim.

The main suspect's defense lawyer, shortly before Wednesday's opening, said his client was not guilty in the context of the charges laid.

The defendants include eight Syrians, one 23-year-old Iraqi, an 18-year-old Algerian and a 25-year-old German said by authorities to be "without migratory background." The 11 men have already spent months in investigative custody.

Read more: Rape survivor calls for 'justice to be done'

The woman was allegedly offered the drug Ecstasy and then a separate unknown substance was mixed into her drink, rendering her defenseless, prosecutors said. On the following morning, she went to police, who then searched for a further unidentified suspect using a composite sketch.

In total, 12 suspects were detained between October 2018 and April 2019, with one of them later released and investigations against him dropped.

The victim is listed as joint plaintiff in the case, but was not present at Wednesday's trial opening, which was delayed by an hour and a half while the accused were transported to Freiburg's court complex from various prisons, reported SWR radio.

The court foresees 27 days of proceedings between now and December.

Read more: Violence against women is a problem for us all

Reporters and film teams in Freiburg were required to obtain court permission to film the trial's start and to obscure images of the faces of those accused and of the plaintiff. Security checks, including metal detectors inside the complex's entrance, were also ordered.

Retaining anonymity for those involved was necessary, said the court in a May 27 press statement, "because of the presumption of innocence in their favor up to the final conviction."

Journalists observing proceedings inside the courtroom were barred from making sound and film recordings.

As the Hollywood-precipitated #metoo movement reverberates across society, the prevalence of sexual abuse toward women in the UK has never been more under the spotlight. Sarah Bradbury reports. (31.03.2018)

Freiburg's mayor has urged the protesters to remain "peaceful" and refrain from "further violence." Outnumbering the AfD-organized demonstration, counterprotesters have accused the far-right party of inciting hatred. (29.10.2018)