Germany's national football team has arrived in Brazil, a few days ahead of the World Cup. This comes just hours after the players learned that they would have to leave behind one of their key teammates due to injury. 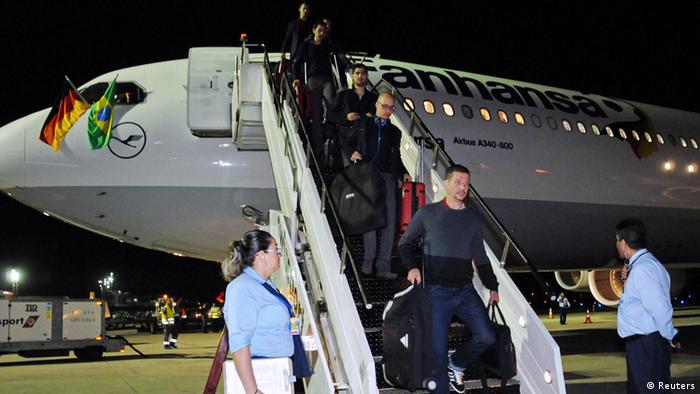 The Lufthansa jet carrying Germany's 23-man squad, along with almost 40 other members of the delegation, including coaches and other support staff, touched down at the airport at Salvador de Bahia in the early hours of Sunday local time.

The team was then took a connecting flight to Porto Seguro, before traveling the 30 kilometers (19 miles) to its final destination, Campo Bahia (pictured above), where the squad is to be based throughout the World Cup.

"It's good that it is finally starting" said team manager Oliver Bierhoff shortly after they arrived.

Coach Joachim Löw's men had set out on their 10-and-a-half hour flight from Frankfurt late on Saturday local time.

The team headed for Brazil without one of their key players: speedy midfielder Marco Reus, who sustained an ankle injury in Germany's last friendly prior to the start of the World Cup, a 6-1 victory over Mainz on Friday.

In Reus' absence, coach Löw nominated Sampdoria defender Shkodran Mustafi to round out his 23-man roster for the tournament, which begins on Thursday.

Bierhoff said he expected the team to take the loss of Reus in their stride.

"We won't be complaining. We will accept the conditions as they are," he said. "I am convinced that with this attitude we can achieve a lot at the World Cup."

The team was to hold its first training session in Brazil later on Sunday, as it prepares for Germany's first World Cup game - against Portugal on June 16.

After learning of his diagnosis on Saturday, Reus said he felt crushed by the news that he would not be going to the World Cup.

"I really don't know how to express what I feel in words," Reus said.

At the same time, though, he said he would now put all of his energy into rehab from his injury, a partial ligament tear above his left ankle, which is expected to keep him off the training field for the next six to eight weeks.

"I need to approach my rehab professionally," the Dortmund player said."Life goes on and I intend to come back even stronger than before."