German states speed up refugee deportations under federal pressure | Germany| News and in-depth reporting from Berlin and beyond | DW | 03.06.2016

Germany's federal government and states are blaming each other over the pace of the deportation of asylum-seekers and accusing each other of slowing down the process. Meanwhile, the rate of deportations is accelerating. 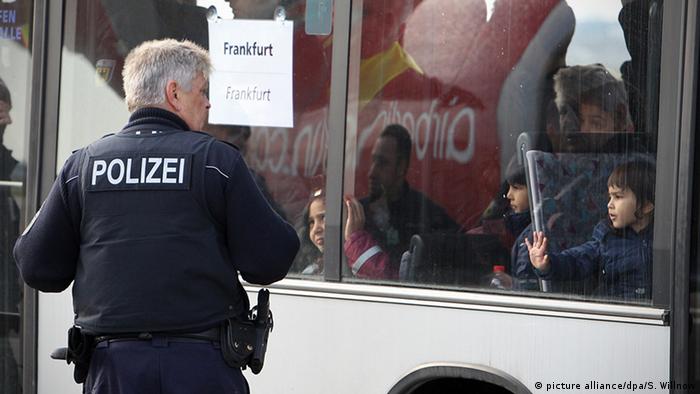 A row between the federal government and state governments has erupted after a Federal Interior Ministry report was leaked to the "Bild" newspaper on Wednesday that named a host of reasons why deportations of asylum-seekers were not happening as quickly as they would like.

In the internal report, Interior Minister Thomas de Maiziere accused the states of "only now developing the political will to implement the residency law," a problem compounded by "very poor staffing" in the relevant offices. Not only that, de Maiziere complained, there was poor cooperation with countries of origin whose embassies were not issuing replacement papers for their citizens.

In general, de Maiziere bemoaned the long time it takes for "the organization and implementation of deportation measures, which makes it easier for those obliged to leave the country to disappear."

Nevertheless, the Interior Ministry's own figures showed that the rate of deportations was speeding up, and would rise by 4,500 to around 27,000 in 2016. Furthermore, the ministry expects the number of asylum-seekers who leave voluntarily to also rise significantly - from 37,500 in 2015 to 61,000 this year. 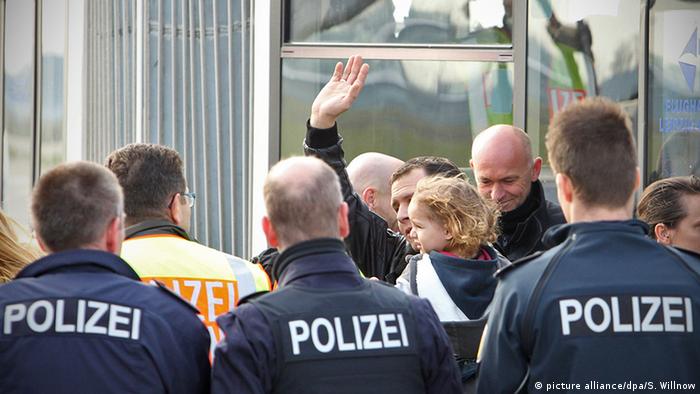 Altogether, the government estimates that there are some 220,000 people in Germany who should be deported, of whom 168,000 have been granted "toleration" status - a temporary reprieve from deportation for legal reasons.

The political pressure for more deportations has made itself felt. "In Bavaria the deportations have risen significantly," Stephan Dünnwald of the Bavarian Refugee Council told DW. "The Bavarian interior minister is trying to force through at least one deportation flight a week."

States are also investing a lot more resources in accelerating deportation. "In Bavaria they want to create 750 more positions in central deportation authorities," said Dünnwald. "That's an immense number, and their aim is certainly to force through deportation."

"When it's centralized like that, it becomes an anonymous thing," he added. "Often they don't look for reasons that might speak against deportation, like a training contract or an illness. The first thing they want to do is force the deportation, with a lot of pressure, against human rights and human common sense."

"I had a deportation case yesterday," said Oda Jentsch, a lawyer who represents asylum cases in Berlin. "He was an Afghan, he'd been in Germany for seven years, and he had work. The court could have said, 'Okay, we'll give you tolerance status, and if you manage to keep your job and prove you have your own income' - which he had - 'we'll look into residence status.' This wouldn't have been a deportation case before the recent law change."

Jentsch has certainly seen the extra pressure from the authorities to speed up deportation. "That was a case where I would say the authorities have completely lost all sense of perspective," she told DW. "They're no longer assessing things properly, but trying to fill statistics."

In response to de Maiziere's accusations, various state interior ministers took to the media on Thursday and Friday to defend their work. North Rhine-Westphalia's Ralf Jäger, speaking on behalf other Social Democrat-held interior ministries, said the "extremely uncooperative" countries of origin were mainly to blame, along with the "completely impractical" deportation agreement that the federal government had agreed with Morocco. 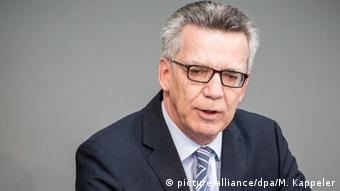 De Maiziere questioned the "political will" in the states

This, he claimed, could mean that deportations to that country could take 25 years. (This was at odds with Jäger's statements in February, when the minister enthusiastically welcomed the Morocco agreement.)

Jäger also credited the local government's migration offices with taking on the bulk of the burden. "If the Federal Office for Migration and Refugees had managed a similar feat, the asylum processes in Germany wouldn't take nearly a year," he said.

Berlin Interior Minister Frank Henkel was similarly defensive. His state came under particular criticism in the federal government report because only 16 percent of those obliged to leave Berlin had been deported. But Henkel had stats of his own. "After just four months we have already reached 75 percent of the total for 2015," he told "Deutschlandfunk" radio. "That means, the doubling that the federal government had formulated as an expectation is very realistic from a Berlin point of view."

Balancing quotas with the law

As Jentsch pointed out, states do not just have a responsibility to fulfill their deportation quotas; they also have to make sure the law is being observed in each asylum case. The increased political pressure has not come with any relief of their responsibilities.

"It doesn't just mean taking a refugee and putting them on a chartered plane," she said. "If they are sick, then you have to make sure that there will be treatment in the country of origin."

"I can imagine it's very difficult for the states," she added. "They have to guarantee that everything will be processed properly. So if suddenly there have to be so and so many deportations, that can't be lawful - that can't be sensible. That's worrying for us."

Thomas de Maiziere said German police would task more officers with returning migrants to home countries, according to a Bild newspaper report. Berlin estimates that some 27,000 migrants will be sent back this year. (01.06.2016)

Desperation grows in Greece as asylum process drags on

Nearly two months after the implementation of the EU-Turkey deportation deal, refugees are packed into camps on Greek islands. Those who have a shot at asylum wait. Others risk their lives by trying to swim away. (13.05.2016)