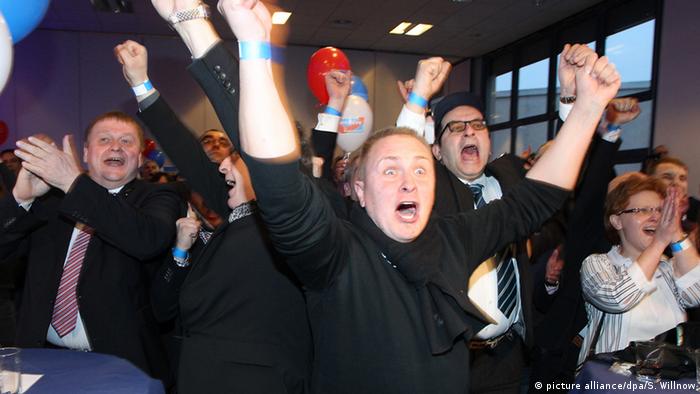 The right-leaning AfD managed to enter all three state parliaments, winning double-digit percentage results in Baden-Württemberg, Rhineland-Palatinate and Saxony-Anhalt, according to official results.

More than 12 million Germans were eligible to vote in the polls to elect new regional parliaments in the three states.

The AfD won 24.2 percent in the eastern German state of Saxony-Anhalt, making it the second largest party after the ruling CDU, which managed to win 29.8 percent. The SPD meanwhile was dwarfed to 10.6 percent, behind the Left Party which won 16.3 percent. 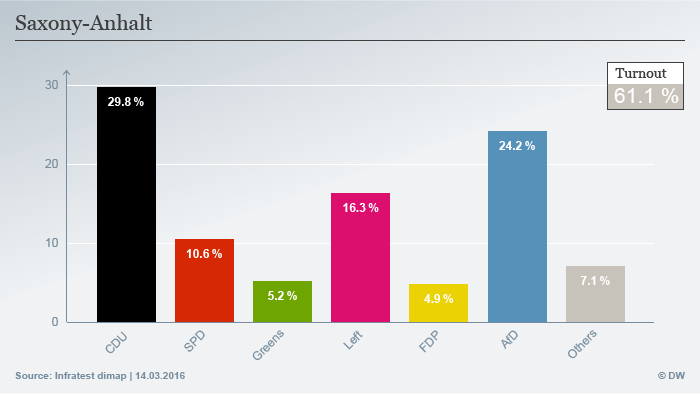 DW-analyst Simon Young said Germany was seeing a consolidation of support for the right-wing party across the country. "I think that means that the AfD wil have to ask itself in turn whether it wants to continue with this very aggressive anti-foreigner tone that it has used in the last few months."

The current prime minister of Saxony-Anhalt, Reiner Haseloff, said that the results showed a clear mandate for his CDU party to lead a coalition government.

"We are going to build a strong, center government in Saxony-Anhalt," he said. "We need to deal with the issue as mainstream parties and find a solution."

The current coalition of CDU and SPD, however, cannot continue, as the two parties together do not hold a majority of the seats in the state parliament.

At the same time, the state leader of the Left, Birke Bull, described the projected results for her party as "bitter."

"We have failed to convince the electorate," she said.

In the western state of Rhineland-Palatinate the ruling SPD is set to remain in power, with final results putting them at 36.2 percent. The conservative CDU, led by Julia Klöckner, lost around three percent, putting it at 31.8 per cent. The Greens barely managed to cross the five percent threshhold needed for representation in Parliament. Meanwhile, the AfD managed to win 12.6 percent. 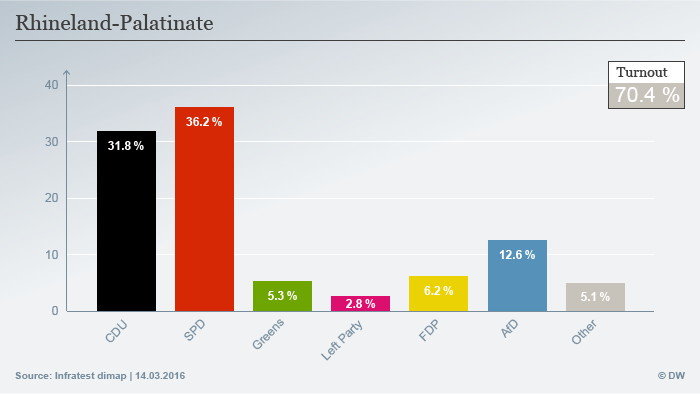 The SPD-frontrunner Malu Drayer refused to answer a question on the issue of post electoral coalitions.

"I am not going to lean towards anything today - today, I am going to celebrate," she said.

DW's Kate Brady reported celebration from the scene at the SPD headquarters.

In Baden-Württemberg, the ruling Green Party gained a substantial 30.3 percent, while the CDU, which ruled the state for almost six decades until 2011, lost a dramatic 11 percent bringing it down to 27 percent.

State elections present a defeat for the Chancellor

The populist right-wing party AfD made the biggest gains in Sunday's state elections, apparently because the electorate felt they were not being taken seriously by the main parties writes DW's Bernd Grässler. (14.03.2016)

The AfD also managed to win 15.1 percent in the state, putting it in third place before the SPD, currently the junior coalition partner in government, which fell to 12.7 percent (from 23) in 2011.

Prime Minister of Baden-Württemberg Winfried Kretschmann described the results as a historic victory for the Green Party.

"I see this plebiscite as an assignment to once more establish the state government and provide the premier," he said.

Because of the SPD's losses it will not be possible for the current coalition to continue.

The so-called "Super Sunday" is largely billed as a referendum on Merkel's open door policy towards refugees, which saw more than a million people arrive in Germany last year.

The policy has proven divisive, both among the German public and within Merkel's CDU. The chancellor has rejected measures such as imposing a cap on new arrivals, favoring instead a plan to distribute refugees across the 28 European Union member states. 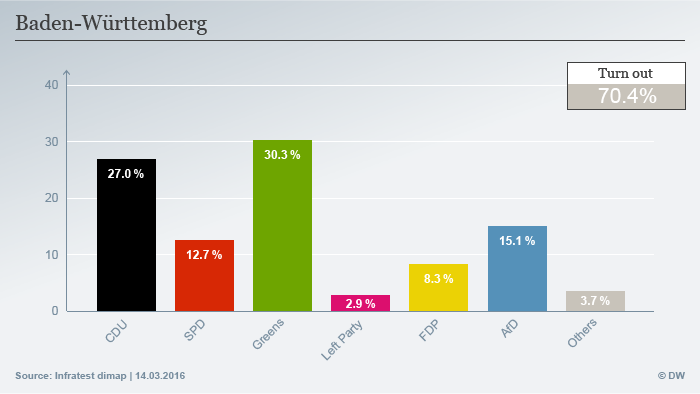 Pre-election surveys had suggested the CDU and its coalition partner, the SPD, could take a hit across the board, while the right-wing populist Alternative for Germany (AfD) was expected to win seats in all three states.

In its traditional support base, the southwestern state of Baden-Württemberg, the CDU appeared set to lose to the Greens, with support for the party dropping by around 10 points to 29 percent. Meanwhile, the AfD had an 11 percent approval rating.

Guido Wolf, the CDU's leading candidate in the southwest, said this year's election campaign was the "most difficult" the party has had to run.

The AfD leader Frauke Petry told German public radio that her party is not expecting to enter government in any of the three states.

"We have been set to work from the opposition since long before this election," she said, adding that this position was quite normal for a young party.

"This election shows that numerous voters are turning their backs on well-established parties," she said.

The populist right-wing AfD campaigned on an anti-immigration platform, and has sought to scoop support from voters disillusioned with the Merkel government's stance on refugees. In comments that provoked an international outcry, the party's leader Frauke Petry suggested earlier this year that police should fire at refugees "as a last resort," to prevent unregistered asylum seekers entering the country.

Interior Minister Thomas de Maiziere meanwhile had cautioned voters against backing the AfD, saying its call to close the borders "harms our country."

"The AfD has no political concept and no competence in terms of finding solutions" to Germany's problems, he told "Die Welt" newspaper.