The populist right-wing AfD party made the biggest gains in Sunday's state elections, apparently because the electorate felt they were not being taken seriously by the main parties writes DW's Bernd Grässler. 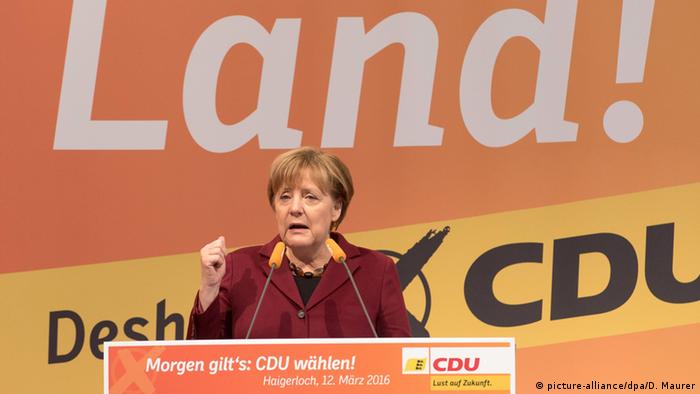 The results in the three state elections in Baden-Württemberg, Rhineland-Palatinate and Saxony-Anhalt are a reflection of the turbulence that Angela Merkel's open-border refugee policy has caused in German society.

While more people took part in the elections than five years ago, many of the voters gave their vote to the right-leaning AfD (Alternative für Deutschland) party, whose goal is to immediately stop Germany's intake of refugees. This is something that will no doubt annoy the major parties.

In the eastern German state of Saxony-Anhalt, the AfD received as much as 24 percent of the vote. That's more than a right-wing party has ever received in modern Germany. 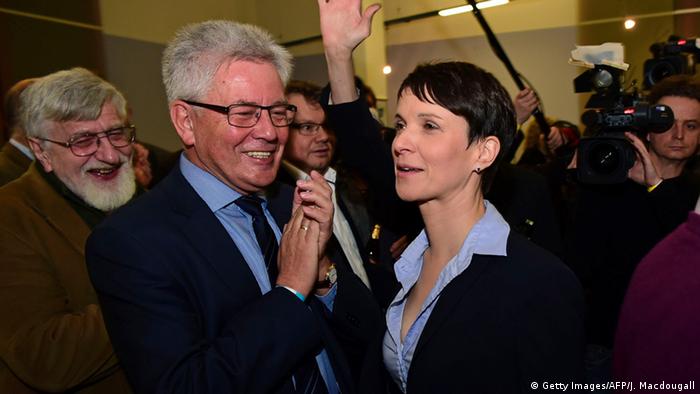 Winners are grinners: Frauke Petry (right) is the party leader of the AfD

Even in the western German state of Baden-Württemberg, where the economic situation is good and the unemployment level is low, the AfD received around 15 percent. Here, half the population is reported to be afraid that refugees will make the housing market too competitive, increase crime and lead to too much Islamic influence in Germany.

The results are clearly a setback for the Chancellor, who has been committed to her policy on refugees. In her former heartland of support, Baden-Württemberg, Merkel's Christian Democrat (CDU) party is no longer the strongest force for the first time since 1952.

In the states of Rhineland-Palatinate and Saxony-Anhalt the CDU also lost votes. That things didn't turn out a lot worse is probably thanks to the closure of the so-called Balkan route for the refugees through Austria and southeastern Europe, something which Angela Merkel has heavily criticized. Some 70 percent of voters say that they are "relieved" that not so many refugees are coming to Germany at the moment.

At the same time these elections send a clear message to the government in Berlin to stop refugee numbers from growing again. In the current Grand Coalition, the CDU's Bavarian partners, the CSU, have been arguing for this all along.

Three days ahead of the talks with Turkey in Brussels, Merkel is now also under increasing pressure across Europe. Austria's Chancellor Werner Faymann demanded in a newspaper interview on Sunday that Merkel should set intake limits for refugees in order to stop the "refugee race" to Germany.

Despite these results, Merkel's resignation can basically be ruled out though. In the German parliament, the Bundestag, she still has the majority. Also, apart from her role in the refugee crisis, most Germans remain satisfied with Angela Merkel's work.

The main parties are struggling

The refugee crisis is really giving the political landscape in Germany a shake-up. In addition to the CDU, the country's other main party, the Social Democrats (SPD), are also losing support fast. The majority of voters say they don't know what the party truly stands for anymore. That has a lot to do with the refugee crisis too, about which party leader Sigmar Gabriel remains cagey.

The era in which Germany's two biggest parties, the CDU and the SPD, could choose a smaller coalition partner to govern with are now over. A Europe-wide trend has now well and truly arrived in Germany: the number of people voting for traditional parties has dropped away, and parliaments and governments are becoming more mixed. Even a Grand Coalition of CDU and SPD would not have the required majority to govern in Baden-Württemberg - another first for a German state. 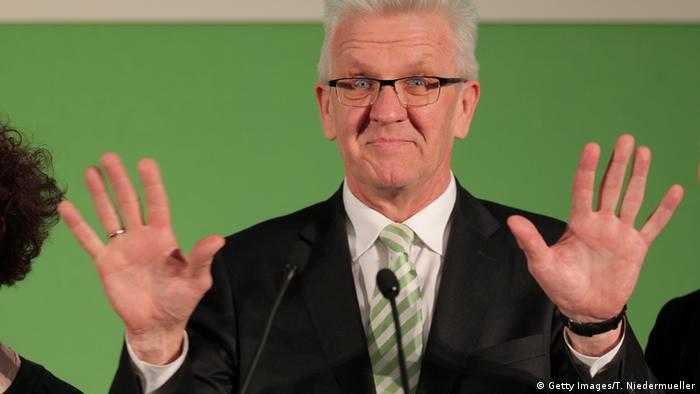 Winfried Kretschmann: a Greens party candidate that everyone can love

State Premier Winfried Kretschmann is the reason for the new spread of votes in Baden-Württemberg. He has helped make the Greens the strongest party in a German state for the first time ever. The politician is known for his traditional values, and he enjoys support from voters from across the political spectrum.

Since the beginning of the refugee influx, Kretschmann has been arguing for a tightening of immigration laws, in contrast to the rest of his party. It's no surprise that 70 percent of AfD voters think Kretschmann makes a good state premier.

Recently, the Free Democrats (FDP) have also been making a comeback of sorts. The party had dropped out of the federal parliament in 2013 due to a lack of support. Now they are back in the state parliaments in Baden-Württemberg and Rhineland-Palatinate, as well as in Hamburg and Bremen. In contrast, the Left Party has lost considerable support in the east of Germany, apparently because they say they don't want to cap refugee numbers.

The AfD lays down the challenge

According to the AfD's leading candidate in Saxony-Anhalt, André Poggenburg, the AfD made the biggest democratic contribution to the state elections on Sunday mainly because the party's mere presence encouraged more people to turn out at the ballot box than usual.

In fact, analyses show that the populist right-wing party gained many voters who would normally have voted SPD or CDU, but it also picked up a lot of first-time voters.

On the issue of refugees, it seems the electorate feels they are not being taken seriously. A quarter of them believe that the AfD understands them best on this issue. But a majority of people questioned also suspect that the AfD is a protest party which is good at identifying the problems but won't provide a viable solution in the long term. 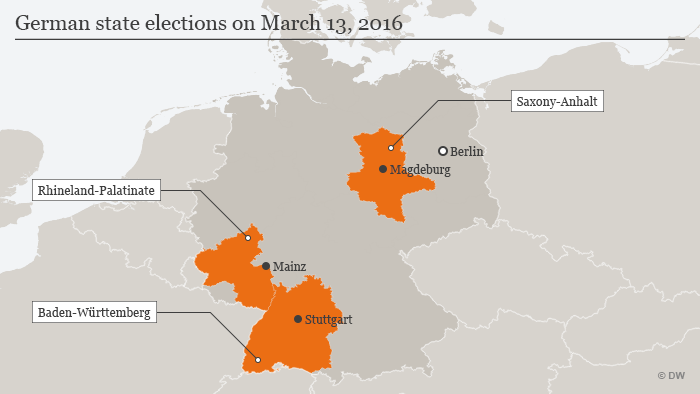 The party is now represented in eight state parliaments, and it could well make it into the federal parliament in 2017. The reason for that, according to political analysts, is that the CDU has become more middle-of-the-road in its policies under Angela Merkel. There is now space for a new party on the right of the political spectrum in Germany.

Protest parties have generally had a pretty short shelf life in Germany. The Schill and Statt parties both disappeared pretty quickly, and the German Pirate party is on its way out. The one thing that would suggest that the AfD won't disappear quite as quickly is that the refugee crisis - and its consequences - are likely to dominate German politics for a considerable time to come.