German accounts for 55 percent of global solar electricity production and is the world's market leader. One of the main benefactors of the solar boom is eastern Germany, which has long been under an economic shadow. 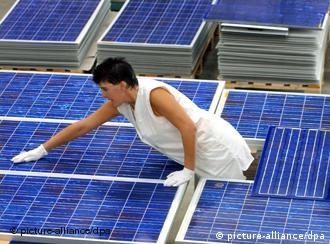 One study says by 2020, more people could work in solar and related branches than in the car industry

Although Germans are renowned for spending much of their six weeks of annual vacation in sunnier climes to escape the frequent gray skies and rain of home, solar energy is turning out to be one of the country's fastest-growing sectors and could be the light at the end of the tunnel for the struggling east.

The eastern city of Frankfurt an der Oder is turning into one of the main beneficiaries of the solar upsurge, with three solar production facilities planned for the region. One, being built by the green energy company Conergy, is scheduled to go online in October or November.

Inside the shell of a chip factory that never got off the ground another in a long string of economic disappointments for the region workers are busy putting in machines that cut and clean silicon. When up and running toward the end of this year, Conergy hopes to produce about 1.2 million photovoltaic modules, which convert the sun's energy into electricity, per year and employ around 600 people. 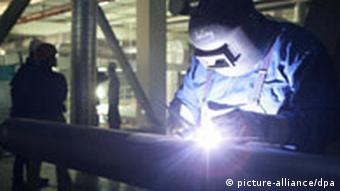 A welder at the Conergy plant in Frankfurt an der Oder

For Frankfurt, which symbolizes the economic woes of eastern Germany in the wake of reunification, the news of new jobs was like bread for the starving.

"We had a job forum in December, where we and the other two solar companies presented ourselves," said Andreas von Brandemer, the plant director at this new location.

"Afterwards we had 5,000 people applying for a job in our factory. The HR people had a lot to do."

Only 100 jobs were on offer at the time, although von Brandermer says if all goes to plan, Conergy hopes to build a second factory in the city in 2009 and will employ around 1,000.

Germany's biggest solar company, Bonn-based SolarWorld, is also expanding its presence in the east. Expansion plans at its state-of-the-art production facility in Freiburg, in the eastern state of Saxony, have a price tag in the hundreds of millions of euros.

Eastern Germany is attractive so many solar players that it's been dubbed, perhaps inevitably, "solar valley." It is attractive to investors for several reasons: wages in the east are lower then they are in western Germany; massive investment in the years since reunification means the infrastructure is excellent; and eastern German cities have been generous with tax incentives to lure companies.

But another important reason for potential investors has been the hometown workforce. Frankfurt an der Oder was the home of East Germany's semiconductor industry. The region already has a skilled workforce, although many of those who used to work in the GDR-era semiconductor industry have been out of work for years or been forced to enter different industries. Many are ready to return. 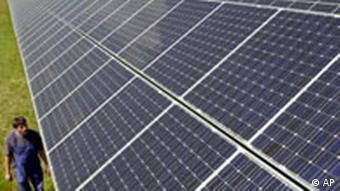 Solar panels in the eastern state of Brandenburg

"So you already have a lot of skilled, knowledgeable workers in the field of handling silicon and that's a major point for companies considering investing in eastern Germany," said Nicholas Dobrott, director of renewable energies for the Industrial Investment Council.

Andreas Kritzski is one of them. He worked in Frankfurt's semiconductor factory in the GDR era, but lost his job with the plant closed. He entered retraining programs in construction, did some work in western Germany, then

lost other jobs as firms folded. He was out of work for several years before starting at Conergy about a month ago.

"The recovery is finally coming, like it was announced all those years ago," he said. "People are sending in their applications and waiting excitedly. Like I did, a lot of looking on the Internet to find out how solar energy works."

Although it might be counterintuitive, photovoltaic cells can operate just fine under cloudy skies, since despite the grayness of a rainy day, there is still solar radiation in the air, otherwise it would be dark.

While the sunniest spots in the world, like the Sahara desert, have a solar energy potential of about two thousand kilowatt hours per square meter per year, Germany's manages a respectable one thousand, according to Henner Weithöner of Solarpraxis, a company that tracks Germany's solar sector.

"This shows how much even Germany or parts of northern Europe, how much solar energy we have and what huge potential," he said. "We just have to use it."

Germans' general environmental consciousness has also helped the country take the solar lead. The Green party is a strong presence on the political stage, having been part of the previous governing coalition headed by Chancellor Gerhard Schröder.

Experts say that that administration's passage of the Renewable Energies Law in 2000 was the momentum behind the current solar surge. 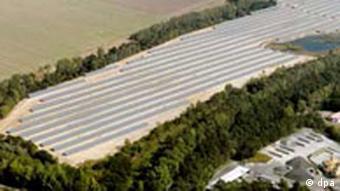 Huge solar facility near the eastern city of Leipzig with around 33.500 solar modules

The legislation committed the country to at least doubling the percentage of renewable energy in the overall supply by 2010. It set up generous rates for renewable energy providers who feed into the electricity grid, and created a market for solar energy. Last year, the solar industry had sales of 3.8 billion euros ($5 billion) and employs 53,000.

According to a report in the daily Frankfurter Allgemeine Zeitung, a study carried out by the Munich-based consulting firm Roland Berger estimates that by 2020, more people could be employed in the environment-related sector than are in the auto industry and engineering.

There are still hurdles to be overcome, especially around the issue of price, and bringing it down. Estimates are that electricity from photovoltaics still needs ten years to become competitive with energy from traditional sources like coal or nuclear. But solar companies aren't waiting. They are continuing to invest, counting on technology to eventually bring those prices down.

"If you build up a solar company, lots of manpower is needed," said Weithöner of Solarpraxis. "It is a real job engine for the eastern states."

What Can Be Done to Curb Global Warming?

The earth's glaciers may disappear within 30 years, according to climate expert Roland Psenner, and while climate change has been on world leaders' minds, DW-WORLD.DE readers have also been thinking about the issue. (01.02.2007)