Support for the TTIP free trade agreement with the US is waning further among Germany's Social Democrats. That's a growing problem for Economy Minister Sigmar Gabriel, who's also SPD party chief. 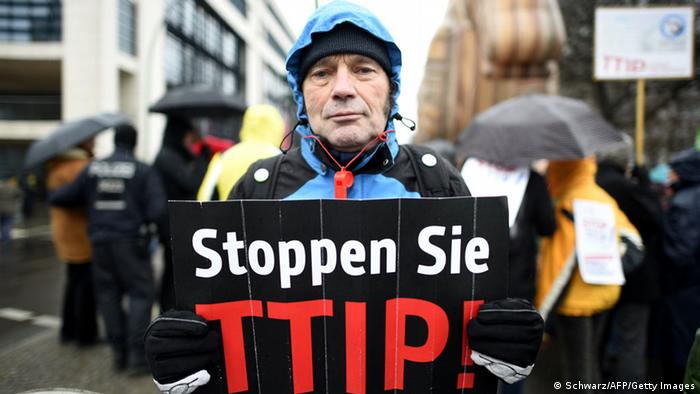 It was a busy day for Sigmar Gabriel. In the morning, in his capacity as Minister of Economics, he was a guest of the Federation of German Industries at the Transatlantic Economic Forum 2015. In the early afternoon, as chairman of the Social Democratic Party (SPD), he had to face his comrades' critical questions at party headquarters.

"Transatlantic Free Trade - Opportunities and Risks" was the title of the conference at the SPD's Willy Brandt Building. Gabriel was at both events to discuss the proposed free trade agreements between the European Union and the United States (TTIP) and Canada (CETA). However, his approaches could not have been more different.

Germany's business associations support the agreements with virtually no reservations. They are demanding the economics minister implement them as quickly as possible. In their view, TTIP and CETA offer the long-awaited opportunity to reduce tariffs and other administrative barriers to transatlantic trade.

Federation of German Industries (BDI) President Ulrich Grillo spoke of hope: "Hope for economic growth, hope for more jobs and hope for the chance to actively shape globalization." German industries see "clearly an opportunity," in TTIP, Grillo said, "namely the opportunity to ensure our prosperity and our excellent position in the world economy over the long term."

It's a completely different mood in the ranks of the SPD, where the agreements are primarily a source of worry. Social Democrats pin their hopes on substantially rewriting TTIP. The demonstrators standing in the rain in front of the SPD headquarters are taking their reservations a step further. There are so many of them that the road in front of the Willy Brandt Building had to be closed to traffic.

"Whoever whispers, lies," and "No secret negotiations, stop TTIP," reads a large banner stretched across a replica of the Trojan horse several meters high. The horse reflects their fear that the agreement would primarily serve the interests of industry and thus would seal the end of European consumer and environmental protection standards.

"Don't be fooled when they tell you they could make TTIP more beautiful, socially conscious, environmentally friendly or democratic," read a flyer that one protester pressed into the hand of everyone who passed him on the way to the SPD conference. It's an appeal that is not welcome there. "Either you put away the flyers, or I will have to take them away," a security guard at the entrance said.

The SPD leadership is critical of the demonstrators. "Out there it's all about PR and emotional campaigns against which rational discussion has no chance," Gabriel said. "'TTIP is evil' does not help us."

Between 'cute' and 'hysterical'

Gabriel tries to counter this opposition with facts. "I see with great concern that members of the public have closed themselves off with their arguments," he said.

Prior to the conference, the SPD website called on members to formulate questions and contributions. There were 820 responses, not one of which had anything good to say about the free trade agreements.

A respondent identified as "Paramonga" asked, "How can the Social Democratic Party support trade agreements that are neither social nor democratic, but will result in a concentration of wealth and power for large corporations and further promote the division of the world population into many poor and few rich?"

"Why in these trade agreements between democratic and constitutional countries is nonsense like secret and non-transparent arbitration courts even being discussed?" asked "Frank."

A "Marion" addressed the SPD leader directly: "How can I explain to my local party group and interested citizens that you, Sigmar, have described the discussion of TTIP and CETA in your public appearances in terms ranging from 'cute' to 'hysterical,' while in Davos you gave the highest praise (in English) to arbitration courts and then sent a letter to us members in which you invite us to discuss the issue?" 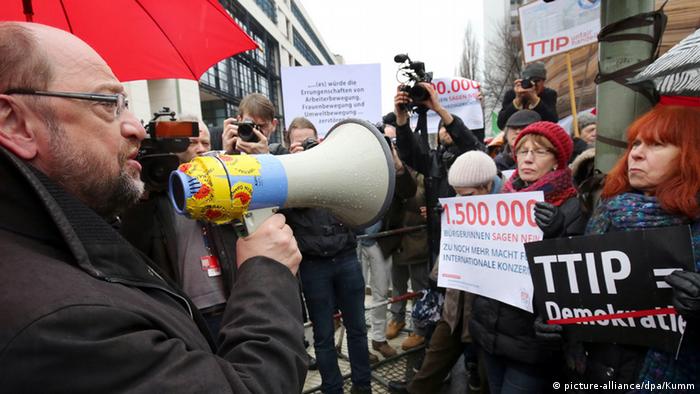 That discussion, Gabriel had told the BDI, had focused too much on fears of American chlorine-washed chicken and too little on the geopolitical importance of free trade agreements. He spoke of the export-oriented German economy and its dependence on open markets. "Fifty-three percent of our gross domestic product is export-driven and a quarter of all jobs depend on exports."

Indirectly, he said, that dependence is even greater. "Part of the problem in our country is that often those who do not work in that field do not know that the economic, social, cultural and ecological progress and success in the sectors in which they themselves work depend heavily on the export sector developing well and successfully."

That's why Gabriel is in favor of TTIP. If the agreement does not materialize, Europe will be on its way down, he reasons. But he knows that he cannot push through a German "yes" to TTIP and CETA against the will of his own party. Hence he takes the concerns of the party members seriously and tries to convince the SPD followers with arguments.

"We can and want to put up our own standards for consumer and environmental protection, and labor law protection," he emphasized. No existing law could be made null and void through such free trade agreements, he maintained.

There's particular resistance in the party ranks against the proposed procedure involving arbitration courts to settle issues between states and investors. It would enable big companies to turn to private arbitration courts over lost profits. Many SPD members want to make sure that states cannot be held liable for national laws which may stand in the way of companies' interests.

Protecting investors in a modern way

Sigmar Gabriel has made a proposal, which he already debated with fellow Social Democrat leaders at a meeting in Madrid last weekend. What he's got in mind is the creation of an alternative investment court presided over by independent and professional judges.

He wants to make sure that oversees investors have no more rights than European investors, with the alternative investment court standing for an open, transparent process.

EU Trade Commissioner Cecilia Malmstrom thinks that's a good idea, adding that in Germany the debate about the free trade agreements in question is being conducted very emotionally.

Not so long ago, hardly anyone showed an interest in trade policies, she said. She argues the discussion has to be on the basis of facts rather than being focused on things like imports of chlorine chicken or hormone-treated meat, which were not being considered anyway.

TTIP is different in so far as many things are still subject to change, despite eight rounds of negotiations already being over.

"Of course, nobody can say for sure whether we can push through all our demands in the end," Gabriel said. "But if we're just of the opinion that the whole thing is solely about US companies teaming up with European firms to trample on citizen's rights, we can just as well stop fighting for rules and regulations in the globalization process."