Executives in Germany's car industry have made their frankest statement to date on a free trade deal between the EU and the United States. They trumpeted freedom from tariffs but labor unions remain cautious. 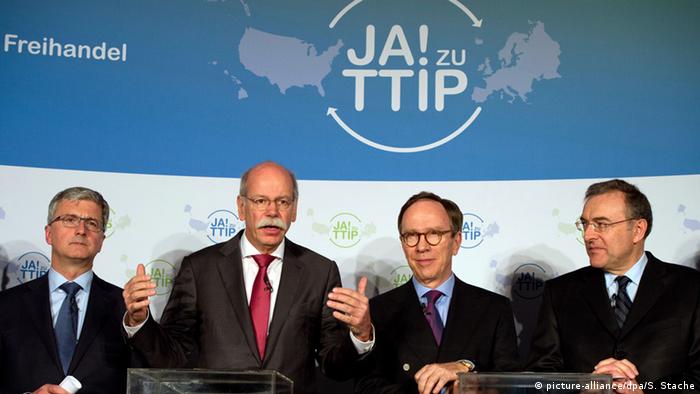 Germany's carmakers positioned themselves squarely behind a planned free trade agreement between the European Union and the United States on Wednesday.

Germany, one of the biggest exporters in the world, "benefits from and lives, like virtually no other country, on globalization," said Matthias Wissmann of the German Association of the Automobile Industry.

At an event in Berlin, top representatives from Daimler, BMW, Porsche and Volkswagen lobbied for the Transatlantic Trade and Investment Partnership (TTIP), saying their firms would save more than 1 billion euros ($1.13 billion) each year if tariffs were lifted.

The US is the second-most important market for Germany's carmakers, behind China, and sales prospects for the future are rosy thanks to the falling price of oil. Cheap gas drove up auto sales there by 6 percent last year, the first rise since the financial crisis.

Last year, German auto manufacturers sold around a million vehicles in the US for a total of 20 billion euros - some 14 percent of the industry's total sales - according to Daimler Chairman Dieter Zetsche.

"Yet we still have to deal with numerous trade barriers," Zetsche told reporters. "It's a waste of economic potential." 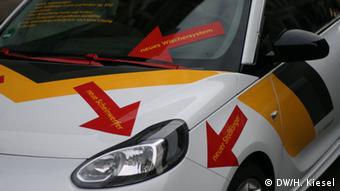 Carmakers argue differing standards for, say, blinkers would no longer be needed

The managers also underscored their frustration with standards and norms that differed on either side of the Atlantic, touting the advantages of no longer having to produce separate blinkers, side mirrors and lights for the two markets.

Negotiations over TTIP have been marred by controversy since they began in 2013. Many Europeans criticize the opaque nature of the talks, which are occurring behind closed doors, and have reservations over provisions regarding consumer protection and labor security.

Germany's IG Metall labor union, which is strongly represented throughout the German auto industry, has said it will oppose any erosion of worker rights or representation on company boards.

The head of VW's works council, Bernd Osterloh, said there was nothing to fear about harmonizing technical standards or lifting trade barriers.

"This approach can give the impression that the automobile industry and its executives are willing to accept disadvantages for consumers and employees if it serves them," Osterloh said. "We're talking about people here, not economic interests."

Germany's Volkswagen has cracked the 10 million vehicle mark, the first double-digit million-unit sales in the company's history. Sales were up in China and the US, where a major auto show kicks off this week. (12.01.2015)