How Europe is selling TTIP to American firms | Business| Economy and finance news from a German perspective | DW | 02.02.2015

Although the US government is negotiating the Transatlantic Trade and Investment Partnership with the EU, many US businesses are not aware of this proposal. Now information sessions are being run to change this. 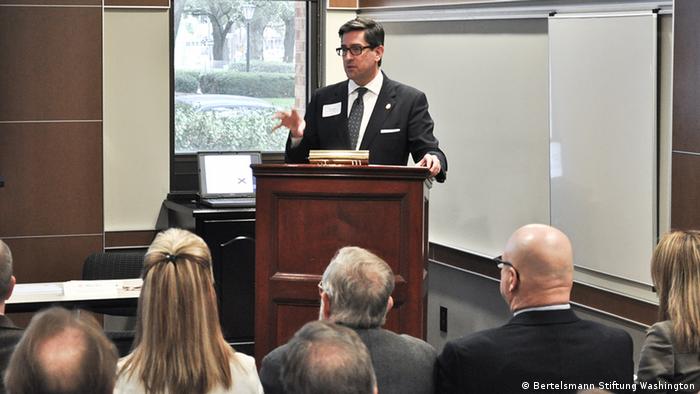 Bill Sisson looks increasingly excited as he talks about his Alabama home town, Mobile, and the opportunities that a common transatlantic market opens up to businesses there.

Speaking to an audience of 30 local businesspeople and economic experts, Sisson - president of the Mobile Area Chamber of Commerce - points out that Mobile was recently ranked by the MSNBC television network as the tenth "hottest city" in the country and described as poised to become "the Southern trading hub of the US." On the Forbes list, meanwhile, Mobile tops the list in terms of growth rates among new industries in medium-sized American cities.

With nearly 200,000 residents, Mobile is the third-largest city in the state of Alabama. Located on the Gulf of Mexico, it is also Alabama's only sea port.

On this day, members of Mobile's business community have crammed into the Chamber of Commerce to learn whether the city's path to success can be sped up even more. Hopes are being pinned on the Transatlantic Trade and Investment Partnership (TTIP), which is being negotiated between the European Union and the US.

Sisson told DW why he thinks TTIP is important for Mobile's economy. "We were founded because of our port in 1702, and we continue to be very interconnected with our port," said Sisson. "And trade is incredibly important to our city. Eight of our 10 largest manufacturers are global companies." 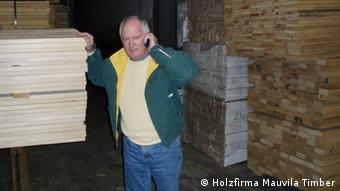 Merchant wanted to find out more about TTIP

One of the people in Sisson's audience is Lane Merchant. He is in the lumber trading business and views TTIP with some skepticism. He is not sure whether the agreement would benefit him, which is why he is here today. As Sisson outlines an overwhelmingly positive prognosis for the biggest local industries - chemicals and aircraft construction - Merchant listens closely.

Alex Sharland, a professor of marketing at South Alabama University, has a less positive opinion of Mobile's current situation than Sisson. For this reason, he thinks TTIP should be implemented as soon as possible.

"For Alabama it's very important, but for Mobile it's essential," said Sharland. "The replacement of public investment with private investment means that as the government withdraws from things like the defense industry and shipbuilding, we need private investment to replace that investment and bring jobs through the private sector."

This outlook is shared by Tony Silberfeld, who was sent to join Sisson's session by the Bertelsmann Foundation, Germany's largest private non-profit foundation, which is organizing various TTIP events on behalf of the EU Commission. Silberfeld is a TTIP expert at Bertelsmann, which has a large office in Washington DC. He presents his calculations in a Powerpoint presentation projected onto a big screen.

"What we're trying to do out here is demonstrate what the impact is, both in terms of jobs and economic growth," said Silberfeld. "We see here in Alabama, for example, about 9,000 jobs coming over the course of the implementation of TTIP. But more important here are exports: in Alabama, we're looking at about a 138 percent increase in exports if full TTIP implementation takes place."

Majorie Chorlins, vice president for European Affairs at the US Chamber of Commerce, has some calculations to present at the session as well. They support Silberfeld's thesis.

"If we just reduced tariffs alone, we would see a $125-billion bump in US GDP over a five-year period," said Chorlins. "By looking now at a more comprehensive agreement, we're looking at a potential of $300 billion in increased exports annually. We're looking at putting an additional $900 a year in the pockets of a typical American family."

Ken Holmes, manager of a small company called Technical Solutions, admits that before this information session he had never heard of TTIP. It's partly his own fault, he says, as he never made a proactive effort to read about the issue. 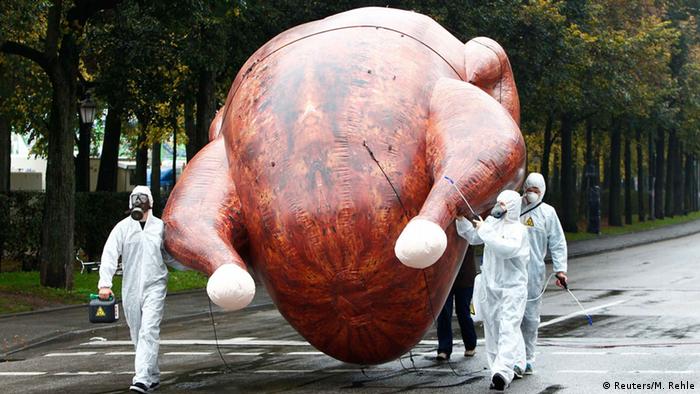 There have been protests against TTIP in Europe

"Since we're a project management company first and foremost, we could benefit from the opportunity of working with foreign vendors - also potentially getting our efforts over there so that we could support foreign companies on foreign soil," said Holmes. "But also if there's any need for services of new companies coming into the United States, we can provide services to them also."

"When more trade is occurring, of either services or products, it benefits us because it increases our number of customers," Holmes added, saying that Mobile as a whole can become a "bigger player" through more jobs and more competition.

In TTIP, Holmes sees not only opportunities but also many challenges. He pointed out that Obama hasn't received a negotiating mandate from the US Congress yet. And the European Parliament, he said, is a willful player on the scene, not to mention the various individual European countries pursuing their own interests.

According to Silberfeld, however, the biggest doubt of US companies is the red tape they could be subjected to under TTIP. "How do we eliminate regulations that don't make any sense for them: duplicative testing, certifications - added burdens that don't increase safety or health standards but provide an obstacle for them doing business overseas?" he wondered.

Merchant has already experienced these types of obstacles. When his company, Mauvila Timber, exports lumber, it now needs to provide proof that the wood has been heat-treated and is free of insects.

"Some bureaucrat thinks that we need to make sure there's nothing there, and that just came up recently," explained Merchant.

Merchant's company is just one of the many small businesses in the US to have learned about TTIP through an information session. According to Silberfeld, it's businesses like these that will be the main beneficiaries of a free-trade agreement.

"There's a notion out there that TTIP is all about large businesses, but what we're finding here on the ground is that small businesses are the ones that will actually benefit most," said Silberfeld.

It is plain to see that the European Commission is not sending experts to American towns for altruistic reasons. Just like in Europe, there is resistance in the US Congress to the idea of being subjected to foreign regulations and foreign products.

According to Thomas Zielke, who represents German economic interests in Washington, the American push for TTIP implementation is not coming from the top, but taking a detour through Alabama and other states.

"In America there's the 'all politics is local' attitude - meaning that policy develops from a local level," said Zielke. "Congress members usually have a much stronger connection to their own electorates than German parliamentarians. If we want to encourage business owners to discuss the issue with their MPs and maybe exercise some influence on them, we need to present them something on a local level."

Executives in Germany's car industry have made their frankest statement to date on a free trade deal between the EU and the United States. They trumpeted freedom from tariffs but labor unions remain cautious. (28.01.2015)

TTIP: 'There's a window of opportunity'

German Agriculture Minister Christian Schmidt was in Washington for talks ahead of the next round of negotiations on the Transatlantic Trade and Investment Partnership. He tells DW about the biggest hurdles. (12.12.2014)