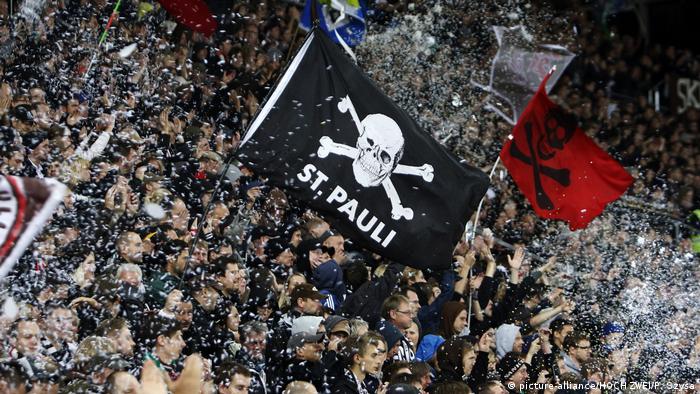 The UK Counter Terrorism Police has distributed a document to schools and hospitals with a number of symbols for public sector workers to be wary of  — including that of German football club St. Pauli.

The second division outfit's famous emblem, which often appears on flags among the crowds at games, features a skull and crossbones and was deemed to be such a threat to the security of British nationals that it was necessary to make teachers, doctors and nurses aware of it.

A number of other symbols were also included on the list under the heading Left Wing Signs & Symbols Aid, as part of a government effort to combat terrorism. Groups such as Stand Up to Racism and United Against Fascism had their logos included in the report.

FC St. Pauli, who are based in Hamburg and whose Millerntor stadium lies just a few steps away from the Reeperbahn district, are renowned for having a left-leaning, anti-fascist following and have expressed support for the Kurdish plight in the Middle East, held banners welcoming refugees, and been involved with confrontations with neo-Nazis and hooligans at away games on a number of occasions.

The 24-page document, which was presented in public sector briefings last summer, was uncovered by British newspaper The Guardian. It also noted Greenpeace, Stop the Badger Cull and Extinction Rebellion as possible terror threats, along with images of a swastika and emblems representing jihadi groups and the National Front.

In response to the notification, St. Pauli defender James Lawrence was keen to show his support, saying he was "proud" of what the club stood for. "Proud of the values we have. Proud to play for St. Pauli. Anti-Fascist, Anti-Racist, Anti-Sexist and Anti-Homophobic. What's not to like!"

St. Pauli's official Twitter account acknowledged the 27-year-old's encouraging words by saying: "Well said, James Lawrence! Nothing for us to add really, apart from lots of love for James perhaps."

People around the world are realizing how hip the Hanseatic city on the River Elbe is. It ranks high on numerous lists, as a lively metropolis by day and a great place to party at night. (03.01.2018)

People the world over are talking about the Elbphilharmonie concert hall, Hamburg's new landmark, but there's much more to see in the northern German port city. (11.12.2019)