The customs canine had pointed towards a false wall in a lorry, where 132 kilogram of hashish were discovered. The 36-year-old driver claimed he didn't know he was transporting illegal narcotics 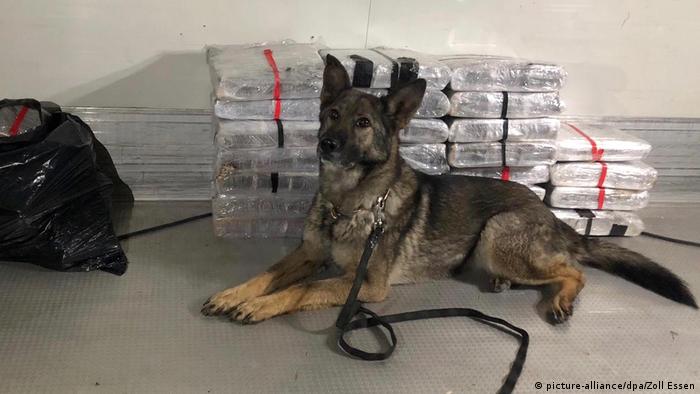 Customs officials conducted a routine check of a lorry driving on the A1 highway between the western cities of Dortmund and Münster. The Polish driver said that to his knowledge, his load did not include illegal contents, including narcotics.

"Customs canine Reese from the main customs office in Münster was used to check the fully-loaded trailer," Germany's customs office said. "The sniffer dog immediately signaled towards the front wall of the trailer."

The lorry was then taken to an area where its contents could be safely unloaded. During further inspection, customs officials found a secret wall, in which they discovered the hashish load.

Police seized the narcotics and arrested the 36-year-old driver, who was later released pending further investigation.

Psychedelic drugs like psilocybin are back in human trials to treat people with mental health conditions. It's a second revolution for a class of drugs shunned by 1960s society. But more research is needed. Here's why. (24.04.2020)

Cannabis is illegal in Germany, but each state has different regulations on how much is allowed for personal possession. The drug commissioner wants that to change. (17.12.2019)

Juan Carlos Bonilla is wanted in the United States on drugs and weapons charges. Prosecutors say he used his position as police chief to facilitate the shipment of US-bound cocaine.

Cologne police have raided several properties in an operation against suspected far-right extremists. They seized bomb-making materials and a "not insignificant amount" of narcotics.