German sailor saved off New Zealand by inflating own jeans

A German sailor has been rescued off New Zealand's coast after inflating his trousers and using them as a flotation device. Authorities have questioned whether he and his brother were prepared for their journey. 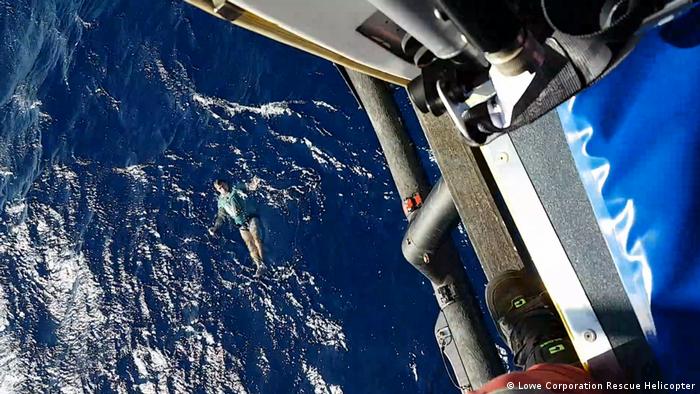 A German tourist was saved by his own jeans after falling into heavy seas off New Zealand earlier this week.
Arne Murke told the New Zealand Herald that he and his brother, Helge, were commissioned to sail a 12-meter (40-foot) yacht, the Wahoo, from Auckland to Brazil.

The pair from Oldenburg were sailing down the east coast of New Zealand when the boat's boom knocked Arne into the water, he told the paper.

Arne did not have a life jacket and was only wearing a T-shirt and jeans. Helge tried to throw him a rope and a life jacket, but in 2-3 meter-swells he was unable to grab them and was separated from the boat.

However, luckily Arne remembered a trick he had learned years earlier that allowed him to transform his trousers into a flotation device.

"I saw it many years ago and I always thought if I ever go overboard without a life jacket I'm going to do that," he told the Herald.

"I took a deep breath, took out my jeans, made knots at the end of the legs and inflated the jeans; pull it over water and get air inside and then push it under water — I had like an improvised life vest."

'Needle in a haystack'

Meanwhile, authorities were alerted and several vessels and aircraft, including from the Lowe Corporation Rescue Helicopter Service, were deployed to find Arne. Its helicopter spent two hours scouring the rough waters before the team finally found Arne and pulled him to safety.

"Imagine being stuck in the middle of the ocean for two hours without any idea if you will be saved, with 2.5-meter swells pushing you from side to side," said Ian Wilmot of the rescue service. "Finding the sailor in the water was like finding a needle in a haystack."

Wilmot told DW that Arne was "incredibly lucky to be alive," considering he had gone overboard without a life jacket and in clothing that blended in with the sea. He credited Arne's initiative of "using his pants as an improvised flotation device, remaining very calm and not needlessly [expending] his energy reserves."

The charity-supported helicopter service posted a video of the rescue on its Facebook page.

A coast guard boat then helped sail the pair's boat back to shore, the Gisborne Herald reported.

"The yacht had no power and was only under sail," coast guard skipper Adrian Brown told the paper. "When we got in line with [coastal community] Whangara we took it in tow for the rest of the trip back to Gisborne."

The paper reported that Arne was treated for hypothermia at a local hospital and discharged the next morning.

The brothers are now stuck in New Zealand, as the boat was discovered to be carrying a marine pest, the Mediterranean fan worm. Questions have also been raised about the boat's seaworthiness.

"An assessment of the stores on board, the lack of navigational aids and the general state of the vessel suggested that it was unsafe for coastal passage let alone a long sea voyage across the Pacific," Dr. Murry Cave from the local council told the Gisborne Herald.

Helge told DW that he and his brother are now completely broke.

A French ship has managed to locate an Indian navy commander who had been injured in the Golden Globe round-the-world race. He was trapped in his bunk, drifting blindly in "one of the most remote areas on the planet." (24.09.2018)

Several people have been injured in a fight between heavily intoxicated German tourists and African street vendors. Local media report a history of such clashes on the Spanish holiday island of Mallorca. (14.05.2016)