The supervisory board of Germany's rail operator Deutsche Bahn has voted to proceed with its project for a new underground main station in Stuttgart despite a two-billion-euro cost overrun and schisms in public opinion. 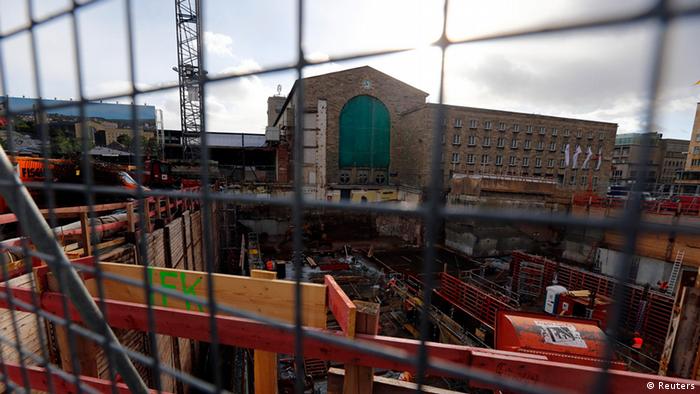 Germany's controversial "Stuttgart 21" rail hub project, which for years has split the country over how to modernize public transport, was cleared to proceed by the 20-member board of the state-owned railway operator on Tuesday - despite an unresolved cost explosion.

Deutsche Bahn (DB) supervisory board members meeting in Berlin told reporters that most had voted to continue the project, with one abstention and one no vote. The completion date was likely to be 2022, three years later than originally planned.

Supervisory board chairman Utz-Helmuth Helcht said after "careful deliberation" members had reached the decision to continue the project. He said DB executives had argued plausibly during Tuesday's crisis talks that it was economically more beneficial to proceed than break off the project.

Priced at 2.6 billion euros ($3.4 billion) when floated in 1995, it reached 4.5 billion in 2009. DB admitted last December that extra costs and risks would push Stuttgart 21 toward 6.5 billion euros. Chancellor Angela Merkel endorsed it in February, but warned against any "further cost surprises."

For years, divisions have prevailed between a citizens' anti-project movement and DB and even within Stuttgart city hall and the government of Baden-Württemburg - despite televised arbitration in 2010 and a pro-project referendum vote in 2011. Opponents have argued, for example, that the billions would be better spent on modernizing many of Germany's smaller stations and regional lines.

Late in 2011, Baden-Württemburg's new government, comprising ecologist Greens and the center-left Social Democrats (SPD) decided not to invest beyond the state's intended 824-million-euro share in the project.

The rail issue was one factor that led in 2009 to the defeat of Merkel's conservative Christian Democrats in Baden Württemberg, which they had run since 1972.

Ahead of Tuesday's board announcement, German Transport Minister Peter Raumsauer had demanded that Stuttgart and Baden-Württemberg help share the anticipated extra costs.

He warned that if they tried to back out as project participants, DB could sue both to provide extra funding.

That outraged SPD members who tend to favor the S-21 concept within Kretschmann's coalition government.

The SPD's whip in the state assembly, Claus Schmiedel, described Kretschmann's remark about alternatives as an "unprecedented affront" that broke with the Greens-SPD coalition's agreed policy stance.

"We have major concern, that the 6.5 or 6.8 billion euros will not be the end of the story and that it still hasn't been clarified, who will absorb it all," Herrmann said. "We don't believe that one can enforce payment of voluntary contributions before a court."

In Berlin, outside DB's high-rise headquarters, and in Stuttgart, scores of protesters demanded that the state-owned corporation drop its S-21 project.

Protesters shouted: "We don't need a billion-euro graveyard; we need a modernized terminus railway station." One woman demonstrator dressed as Chancellor Merkel climbed through a stack of cartons symbolizing a golden tunnel.